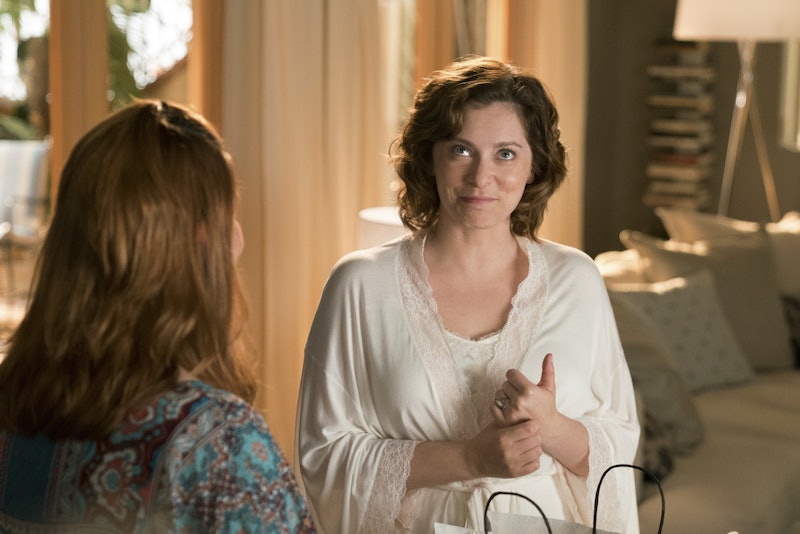 There's no rule that says you have to like the protagonist of a television show, and Lord knows that if there's one TV protagonist who has tried all my patience, it's Rebecca Bunch. However, Crazy Ex-Girlfriend creator Rachel Bloom believes it's OK to dislike Rebecca because, well, who says you have to like every dang character you meet in a television show? Bloom spoke candidly with E! News about a variety of Crazy Ex-Girlfriend Season 2 topics, but it was her words on whether or not Rebecca is actually likable that struck me as the most revelatory.

When asked whether or not she personally had trouble liking Rebecca (a character she created), Bloom replied,

"Oh yeah, absolutely. I have never given a sh*t about people liking her because she's meant to be somewhat, at times, a bubbly antihero. What I care about is if they understand where she's coming from. I don't really care about likability, but I want people to understand why she's doing what she's doing. ... I think that's what I would say is: Any moment where the audience doesn't like Rebecca, Rebecca also does not like Rebecca."

The fact that Bloom believes that not only Rebecca isn't meant to always be likable, but that she doesn't even like Rebecca, is a major key into understanding what's going on underneath the surface of Crazy Ex-Girlfriend. Perhaps that's the key to liking Season 2 overall, because let me tell you, Season 2 was a slog, mostly thanks to the problematic choices Rebecca made.

I'm the first to admit that I had rough patches when it came to caring about Rebecca's emotional journey on Season 2 of Crazy Ex-Girlfriend. In my opinion, for every praise-worthy or sympathetic thing she did, she made about seven mistakes to bring her back into the zone of questionable likability. She was more rash, id-driven, and self-centered to the point of self-destruction during Season 2. Her quest to end up with her believed soulmate Josh involved doing things that put her mental health in danger and her well-being on the line. Loving Rebecca Bunch was difficult, and she tested a full 100 percent of my patience, but for some reason, I just can't quit her.

Luckily, Season 2 attempted to unpack why Rebecca was doing what she was doing; the Season 2 finale actually shined a light on the cause of Rebecca's underlying issues. The show would at times equate Rebecca's intensity and need to have Josh with her own deep-seated emotional baggage, verging on mania, and that made for a more nuanced exploration of the unlikable yet "bubbly antihero" Bloom spoke of in her interview.

That honest exploration, even if it did come at quite literally the last moment of Season 2, helped forgive Rebecca's more "unlikable" actions. This in itself is a relief and revelation if you, like me, watched most of Season 2 frustrated at Rebecca's inability to confront her issues or attempt to really change. Perhaps those moments where we don't like Rebecca — and, by Bloom's estimation, Rebecca doesn't like Rebecca — are a way of strengthening the bond the audience shares with her. You don't always have to like someone you love; we don't always have to like Rebecca, but we can still love her as a character.

Rebecca's ability to be so damn unlikable (at times) is a feat of writing on behalf of Crazy Ex-Girlfriend's Bloom and co-writer/co-creator Aline Brosh McKenna. Knowing that these women are writing their protagonist in such a way, that they acknowledge the viewer is not always supposed to like her, is a relief. Rebecca's unlikeable side and her very questionable antics risk making her repellant, but when combined with the fact that she's written to recognize her faults, she is somehow redeemed in the end.

Rebecca's penchant for being created as an unlikable-yet-lovable antihero is a way for us to stay hooked, stay annoyed enough to keep tuning in, and celebrate her successes when she manages to look outside herself long enough to recognize that some aspects of her life need to change. Granted, those moments are few and far between, but like Bloom pointed out: Watching Rebecca recognize those antihero moments is part of the redemptive power of Crazy Ex-Girlfriend.