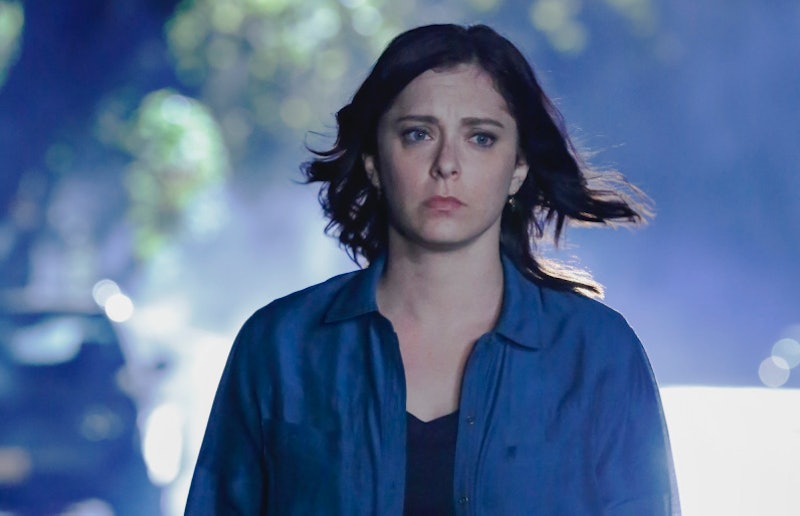 Somewhere between a doo-wop number about her complicated relationship with her mother and a bossa-nova-soundtracked detour at a swim-up bar in the third season of Crazy Ex-Girlfriend, Rebecca Bunch (Rachel Bloom) makes a devastating decision that left me sitting in stunned silence once the credits rolled. Minutes before the end of "I Never Want To See Josh Again," our troubled heroine, despondent and sitting on a plane back to Los Angeles after her attempt to get help under the care of her mother goes disastrously awry, chases an entire bottle of pills with the airline’s finest merlot. The camera stays steady on Rebecca’s face as she’s overcome with desperate determination; only the most minimal of piano soundtracks plays in the background as if to withhold judgment on how we’re supposed to view Rebecca’s actions. Thankfully, through her drugged haze, Rebecca eventually presses the “Help” button above her seat and is greeted by a flight attendant who realizes her dire situation before the episode cuts to black.

It's a harrowing scene that's incredibly emotional yet devoid of melodrama; one of those rare times on screen where something feels so real and immediate that it transcends the carefully scripted beats that were no doubt involved in getting this depiction just right. Watching it, I genuinely wondered what the fate of our protagonist would be, not because her suicide attempt was being used to provide suspense and leverage the plot of a future episode, but because the empathetic depiction of Rebecca's struggles was so clearly the point in and of itself. For once, witnessing a character's battle with mental illness was the entire purpose of the scene and the episode, not the catalyst for something else to happen to her afterwards.

Of course, plenty does happen to Rebecca after her suicide attempt in "I Never Want To See Josh Again," and Crazy Ex-Girlfriend's deft handling of her recovery efforts is an essential part of what makes the show's depiction of mental illness so uniquely compelling. Even for a show that has spent so much time carefully and often comedically challenging viewers' perceptions of mental illness and what constitutes being “crazy” (just see the show’s Season 3-theme song, or, you know, its deliberately on-the-nose title, which is memorably spoofed in the Season-1 theme song as "a sexist term"), Crazy Ex-Girlfriend's willingness to make Rebecca's mental-health struggles and subsequent diagnosis with borderline personality disorder the focal point of this season is arguably unprecedented on television.

Although the rise of the (almost always male) antihero on shows like Mad Men and Breaking Bad in the last decade helped audiences get more comfortable watching and rooting for flawed protagonists, their shortcomings tended not to be viewed through the lens of mental illness (though, in some alternate universe, Mad Men is a chronicle of a talented ad executive’s struggle with alcohol addiction, and Breaking Bad is an examination of a chemistry teacher’s sociopathic tendencies). It’s only recently that TV has moved toward explicitly putting nuanced depictions of mental illness at the forefront of the conversation. From Mr. Robot’s empathetic treatment of Elliott’s split personalities, to BoJack Horseman’s colorfully animated yet fearlessly bleak chronicle of depression, to Jessica Jones’ unflinching portrait of PTSD and beyond, television in the past few years has made major strides in showing viewers that the protagonists we root for and identify with on television can and often do suffer from the same mental illnesses that affect one in five U.S. adults each year.

But for every sensitive portrayal of a character with mental illness, there are plenty more that contribute to the stigma. Historically, the way that TV shows have treated mental illness has been detrimental to those who suffer from its very real effects. "Mental health is either glamorized, or people who suffer from mental illness (and those who treat it) are portrayed as crazy, weak, violent, or weird," Lata K. McGinn, PhD, professor of psychology at Yeshiva University and Co-Founder of Cognitive Behavioral Consultants, tells Bustle. And when a character's mental illness isn't viewed as an overtly negative attribute, it's often because it's viewed as a sign of genius, which is equally problematic. It's a common trope, particularly in procedurals like The Good Doctor and House, to glamorize mental illness as a trait that makes the (admittedly still tortured) protagonist uniquely brilliant. It's also an "excuse" the writers can have the character fall back on whenever he — and yes, it's usually a he who gets the "mad genius" label — messes up.

The other issue with most depictions of mental illness, McGinn says, is their failure to describe or focus on evidence-based mental health treatments, which not only perpetuates the stigma, but also discourages vulnerable populations from seeking help. Among the many issues that mental health professionals had with Netflix's hit teen drama 13 Reasons Why, the show's failure to focus on how its protagonist could have received help is one that suicide prevention advocates say was its key shortcoming (aside from its glamorization of the event, subsequent martyrization of the victim, and its emphasis on how suicide can be a way to get revenge). This issue extends to how methods of treatment are portrayed when they do show up on screen. For every reasonable psychologist that pops up in a therapy scene, there's an example of a character who became robbed of personality because of medication or a therapist who maliciously manipulated a patient.

It makes sense, then, that we've been ready to applaud more healthy and realistic portrayals of mental illness on TV for some time. But even among the growing crop of sensitive depictions of characters with mental illness on television, Crazy Ex-Girlfriend stands out for its holistic approach to telling its protagonist's story. Though it was likely clear to fans early on that Rebecca had a history of mental-health issues — she casually flushes her meds down the toilet in Season 1, and Season 2 drops in a few references to her depression and institutionalization — series creators Bloom and Aline Brosh-McKenna said that waiting until Season 3 to explicitly depict Rebecca hitting rock-bottom was a deliberate choice meant to emphasize her humanity. Giving viewers two-and-a-half seasons to get to know and love Rebecca as a fully formed person with an array of positive and negative attributes helped develop her as a nuanced character who, even when she does do things that could earn her the label of a "crazy ex-girlfriend," exists as so much more than a stereotype or a diagnosis. And that's the point.

It helps that Crazy Ex-Girlfriend has gradually built out its talented supporting cast and is committed to highlighting their lives and struggles, too. In "Josh Is Irrelevant," we watch as Rebecca's friends reel from the news of her suicide attempt and explore the different ways each of them copes with the news (ever the mama bear, Paula is committed to staying by Rebecca's side even when she'd rather be alone, while Valencia gets validation from posting status updates about Rebecca's health on social media; the deadpan Heather, meanwhile, strikes up a new relationship to distract herself).

Support systems are an important and often forgotten element in dramatized narratives about mental illness, and while McGinn emphasizes to Bustle that the best course of action is not to depict suicide or suicide attempts on screen at all for fear of copycat behavior in vulnerable populations, she acknowledges that unlike 13 Reasons Why's controversial glamorization of suicide, portrayals of suicidal characters on screen should at least always aim to avoid romanticizing or glorifying the act, something that Crazy Ex-Girlfriend is careful not to do.

"It is imperative that the focus be on why this is not a helpful, glamorous, or romantic solution to life’s problems and also that suicide is not a way to punish people who have wronged you in some way," McGinn says. Equal emphasis should also be placed on depicting recovery. "It would also be beneficial to show that seeking help is a good idea, that most people are responsive when sufferers reach out, and that mental health practitioners are sane professionals who are trained to treat people who suffer from mental illness," she adds.

All of this holds true for how Crazy Ex-Girlfriend has treated Rebecca's arc this season, and it's something that many fans of the show have been grateful for. As the latter half of Season 3 continues to follow Rebecca as she works on a plan for recovery with the help of Dr. Dan, there was something else I couldn't help but notice: After 37 episodes including Josh's name in the title, the pivotal episode "Josh Is Irrelevant" was the last episode to include the name of Rebecca's former flame. We can't know for sure if Rebecca will ever truly eliminate the underlying cause for why she fixated on Josh, but it's a sign that this show — which despite everything I've mentioned here, is still very much a musical comedy — has reached a turning point. Rebecca's obsession with Josh was always a symptom of a larger illness, the repercussions of which Crazy Ex-Girlfriend is only now explicitly beginning to explore. So far, it's been as engrossing, entertaining, and as touching as ever.