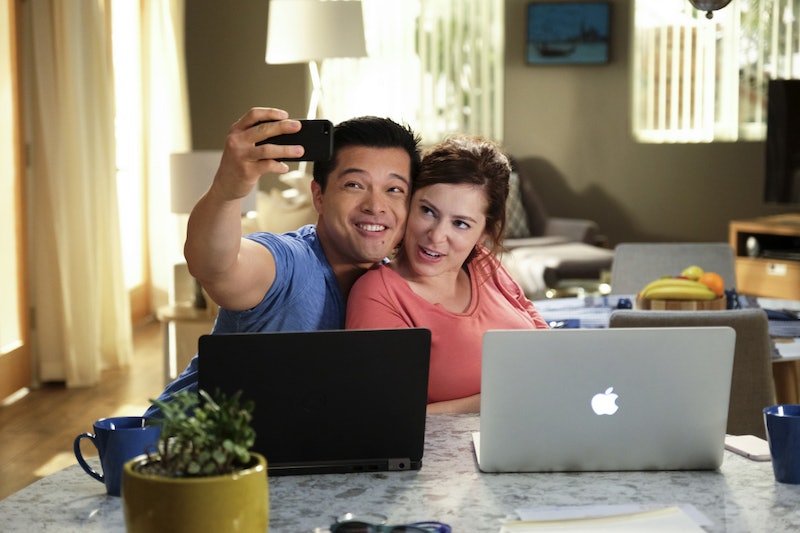 It only took a season and a half, but Rebecca (Rachel Bloom) finally landed the guy of her dreams on Crazy Ex-Girlfriend. That's right, Josh Chan (Vincent Rodriguez III) actually pursued Rebecca and initiated a real relationship with her after all this time. All it took was Rebecca uprooting her entire life, quitting her job, moving across the country and basically stalking him for an extended amount of time for him to realize just how much she cared about him. It probably doesn't hurt that he just got dumped by his cool new girlfriend Anna (Brittany Snow) and is on the rebound, but let's just say that Rebecca isn't exactly looking her gift horse in the mouth.

While Rebecca and Josh were "together" at the beginning of this season, their relationship is going to be much different this time around. For starters, they're both invested and actually calling it a relationship. Progress!

"The last time was really not consensual on his part," executive producer Aline Brosh McKenna tells Bustle at a CBS Studios breakfast event in Los Angeles. "He just fell into it and she was keeping it alive by making it no strings attached. This time he's realized that it's her, it's always been her and she's always been there for him."

That may sound like a cause for celebration for anyone who has been watching their relationship roller coaster over the entire series, but let's be real: Josh and Rebecca getting together won't solve any of their respective problems. In fact, it's only going to delay any personal growth the two of them might have achieved had they stayed single.

"It's not coming from the greatest place," McKenna agrees. "He's in some ways just as unstable as she is. He's untethered. He's been dating all these women. He doesn't really have any career motion – we've been seeing him in the backroom of Aloha all season. This guy is a little lost and he admires her and sees that she really, really does care about him. And whether they belong together or should be together or if it's the right time or if they both need a break, they do really profoundly care about each other."

And yes, McKenna agrees that while Josh may have had pure intentions when he got back together with Rebecca, it was mostly motivated by his break up with Anna.

"He's not so strong and he was pretty surprised and shocked when he gets dumped, so it's natural for him to gravitate to the person who loves him unconditionally and is always there," McKenna says. "A lot of relationships have gotten second shots because someone got dumped, looked around and said, 'Hey, who's always standing there?'"

For Bloom, finally getting to explore what a real relationship looks like between Josh and Rebecca was something she had been looking forward to for a long time.

"This is the first time they're actually in a relationship," Bloom tells Bustle excitedly, almost having to shout over the loud noise of conversations happening around her. "Summer camp was summer camp. And then the relationship before now has every time been one-sided. The power dynamic they had earlier in the season was really f--ked up. This is the first time they're both going into a relationship theoretically on the same page. It's kind of the opposite of the promise of the premise of the show. How do these people actually stay together?"

While Rebecca and Josh certainly have enough problems between the two of them, an outside factor that may have more influence over their relationship than they realize is Rebecca's new boss at work, Nathaniel (Scott Michael Foster). Already he started to negatively impact their relationship by making Rebecca look down on Josh for his level of intellect and lack of career. And is it just us or does it seem like Rebecca may actually like Nathaniel as more than just her boss?

"He treats her like s--t, which she really enjoys as many women do in certain points in their lives," McKenna says. "He's great because he's a real antagonist for her which is something that she's never really had. Greg [Santino Fontana] was soft for her from the second he met her, but Nathaniel is just like, 'Who is this person?' And this is the funny thing: he actually seems really perfect and tries to present that publicly but he's going to turn out to be the most screwed-up character on the whole show."

As hot as Nathaniel may be, he is hardly the right guy for Rebecca to be lusting after, especially now that she finally landed Josh Chan. But unfortunately for her, the heart wants what it wants.

"Nathaniel plays into, whether Rebecca realizes it, a lot of her own insecurities and often we can be attracted to our insecurities," Bloom says. "He puts her down, he has this status. Remember, Rebecca was only into Greg when he said he was going to stop pursuing her. Be it platonic or romantic, Nathaniel pushes her buttons with the whole power dynamic status thing. And he himself is a very f--ked up person. We will really see his character's inner little boy and how wounded by his father he is, similarly to how wounded Rebecca is by her mother. In some ways, Nathaniel is the WASPy version of Rebecca."

Despite just how horrible Nathaniel is for Rebecca, his introduction on the show actually showcases something you may not have noticed, but is very important and groundbreaking about Crazy Ex-Girlfriend, airing Fridays at 9 p.m. on The CW.

She pauses, and then adds with a laugh, "And then we come back with the straightest, whitest male as possible."

Hey, we're not mad about Nathaniel's addition to the show if it means we get to see Foster sing at some point ... just as long as he doesn't mess with Rebecca's life too much. Is that so much to ask?

More like this
You’ll Most Definitely Recognise Kyle Pryor’s Soap Star Girlfriend
By Sophie McEvoy
The 'Kenan & Kel' Reunion On 'SNL' Took A Dramatic Turn, Thanks To Keke Palmer
By Brad Witter
Theo James Revealed The Truth About His 'White Lotus' Nude Scene & Fans Can't Cope
By Stephanie Topacio Long
Keke Palmer Just Announced She's "Going To Be A Mom" On 'SNL'
By Brad Witter
Get Even More From Bustle — Sign Up For The Newsletter