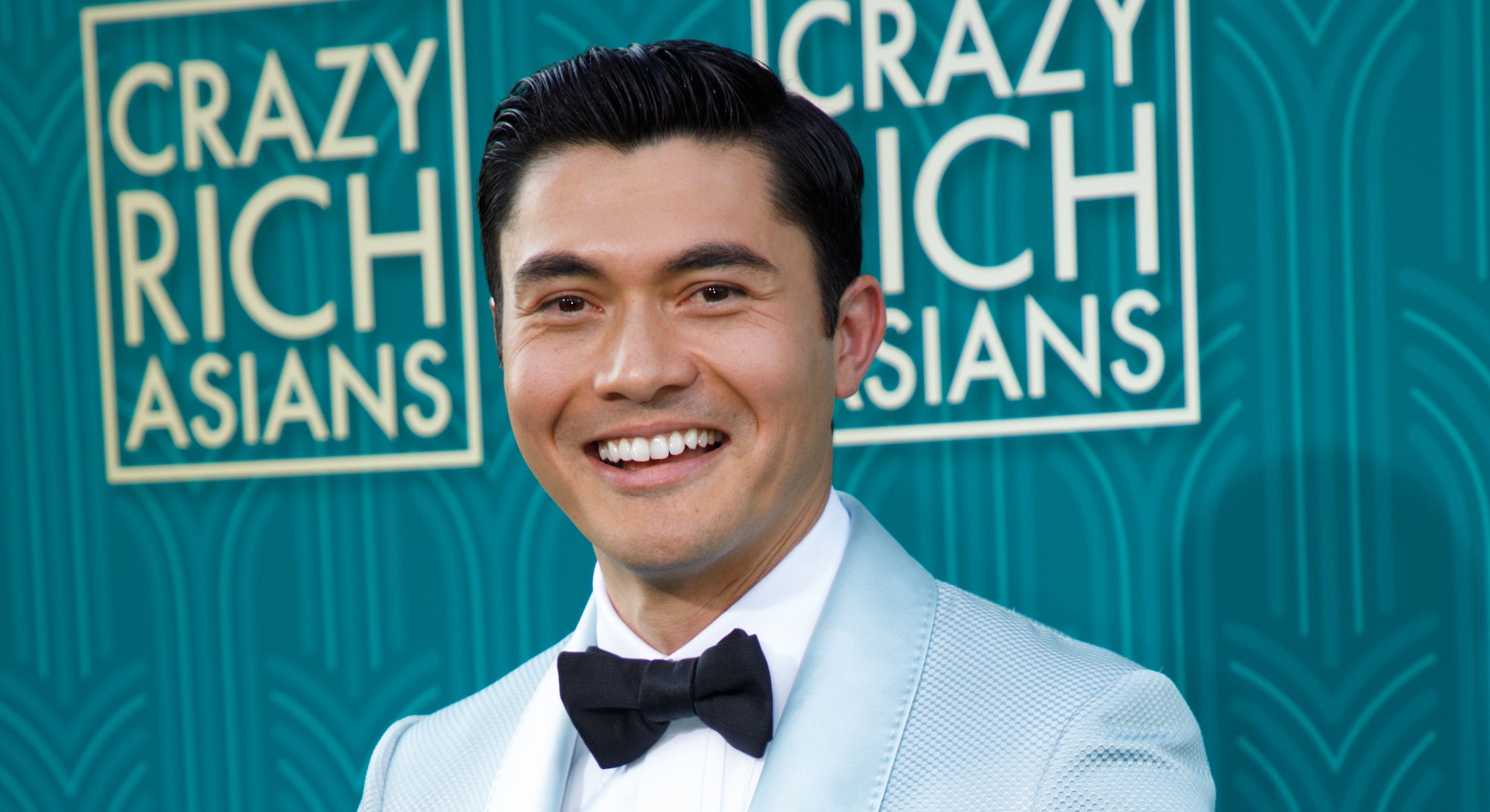 Henry Golding has all the makings of a textbook Hollywood heartthrob — sweet eyes, charming accent, a million-watt smile that belongs super-sized on the side of some big city building — except for one not so subtle thing: He's Asian. Well, half Asian, technically speaking (he's British-Malaysian) but it’s enough of a “thing” that it stacks the odds against him being the leading actor in a major film, let alone one who plays a smart and sexy bachelor in a romantic comedy. And yet, here he is, walking toward me through the sunlit terrace of the Sunset Marquis Hotel, fresh off a plane from Singapore on his way to New York, to promote his role as Nick Young, a wealthy, Oxford-educated history professor in the best-selling novel-turned-movie Crazy Rich Asians.

Dressed in perfectly tailored jeans, a sharp navy polo, and a brown suede jacket, Golding leans in for a warm hug and thanks me for taking the time to meet. "You look great!," he says, complimenting my outfit, right before asking if I want something for breakfast. He is as suave and gentlemanly as I imagine Nick Young would be, quickly confirming my suspicions — people are going to be smitten with him come Aug. 15 after they see him on the big screen.

But when I suggest to Golding the idea that he just might become America's next big superstar, he bashfully declines, almost too embarrassed to even think about the possibility.

"Will that happen? Gosh, it's a weird thing isn’t it," he says with an incredulous smirk on his face. "I haven’t even thought about it. I just want the movie to do well. My focus at the moment is just hoping that people love it and enjoy how joyful the movie is and the smiles, the tears, and the laughs that it brings."

Golding's answer is endearing and gracious, much like how he is in real life. Perhaps he's just being modest — before this, he had no major acting experience save for his credits as a travel host for BBC and The Discovery Channel. (And before that, he was a hairstylist at a prestigious salon on London's Sloane Street.)

Or perhaps it's because he understands the gravity of this film and his part in it: It's the first movie to feature an all Asian cast since The Joy Luck Club 25 years ago. And Golding's character — the intelligent, handsome, and loving boyfriend with eyes only for Rachel Chu (played by Constance Wu) — is a role that quite frankly hasn't ever existed for Asian men before.

It is a lot of pressure for Golding: To do Kevin Kwan's book justice. To showcase Singapore as the alluring and luxurious metropolitan city that it is. To smash Hollywood's stereotype of the nerdy and emasculated Asian male. And though it was a huge gamble to cast Golding (given his lack of acting experience) , director Jon Chu and producers Nina Jacobson and John Penotti were convinced he was the only one who could play the part.

"I was the 11th hour pick. They tested every single human male possible for this role, and they were about to go to Beijing and test people from there. But nobody was fitting the bill — nobody could pull off who Jon and Nina and John Penotti thought this character should be," Golding tells me, recalling the moment he found out he got the part, last year on Valentine's Day. "[Chu] was like, 'From everything I've seen, you are really like an incarnation of this guy — you are just missing all that money," Golding laughs heartily.

But not everyone was so easily convinced. When Crazy Rich Asians fans heard Golding was cast as the leading man, many of the book's super fans were outraged, accusing Golding of not being "Asian enough." When I ask him about the backlash, he's empathetic. "People are right to question my ethnic background," Golding tells me, but the way he sees it, he's as Asian as Asian gets.

"Just because by blood I'm not full Asian doesn't mean I can't own my Asianness. And I relate so much more with my Asian side," he explains. "I sound ridiculously British, but I was born in Sarawak [Malaysia]... like I'm from the tribe in the middle of the jungle — you cannot get any more Asian than that. I’ve grown more than half my entire life in Asia, exposed to more cultures than you can shake a stick at just through what I've done in the past. If anyone can relate to being Asian in the Asian culture, it was me. And for this particular role, I've been living in Singapore for the past six years."

Having to defend his cultural identity seems second nature to Golding. Growing up in "suburban UK," he tells me he was always labeled as the "Asian kid" yet because he was mixed race, he never felt at home. "I felt like if you were an Asian mix, were you allowed to belong in any society or were you just meant to be on the outskirts?"

This struggle of having to navigate his bicultural self-identity was something that bonded him with his Crazy Rich Asians cast mates.

"That was the great thing when we all got together as a cast, we had all been through our trials and tribulations of being somewhat Asian in different countries other than Asia. The guys from the UK, I'm sure as kids they got bullied for being Chinese and then called all the names under the sun, the Americans especially, the Australians. But we all came for this one cause — this movie — and just being together with people who had the same kind of struggles as [I] did... it just brought so much more meaning to the film."

Golding hopes Crazy Rich Asians fans can look past him being half-Asian and see the deeper meaning in this movie — the bigger picture. That this film is more than just a rom-com. It's a movement to not only create more roles for Asian actors in the industry, but to also normalize seeing our stories as real people — not samurai warriors or opium-smoking villains — on the big screen.

"If we're leaning towards [more] Asian representation, we should be supporting rather than nitpicking," Golding says of his casting. "Kevin [Kwan] created these wonderful characters, which are bigger than larger than life, and [this movie] celebrates that. It's giving voices to Asians who in the past in big movies were sidelined to be the sidekick or the token character, just to fill-in color for color’s sake."

Crazy Rich Asians, he continues, "gives a voice and a voice of so many different tones and characters and moods in one sitting. To go from Michelle Yeoh who plays Eleanor with such passion... then you got crazy characters like Jimmy O Yang’s Bernard Tai, which is just nuts and out there, and then you got Ronny Chieng who’s hilarious. And then Nora [Awkwafina], obviously. We cover all the bases, and that's how it should be. We should be playing characters who are just characters for character’s sake, not because they're of a particular race."

And that's exactly what Golding has continued to do after filming Crazy Rich Asians — look for roles that aren't confined to any ethnicity. Take his upcoming part playing Blake Lively's husband in A Simple Favor. "The guy's name was Sean Townsend. It was never written as an Asian role — it's never really highlighted that I am an Asian person married to Blake Lively. But that's what it should be like," Golding explains.

But Golding is not shying away from Asian roles either. He just wrapped up filming an indie drama called Monsoon, where he plays Kit, a British-Vietnamese man on a mission to return his parent's ashes to Vietnam. "My team is focusing on going for leading roles which aren’t specifically written for Asian men, but also not shying away from the fact that I’m Asian. I’m celebrating it. I love the fact that I’m Asian, so I'm not like, 'Oh no, Kim Lee — that’s not a character I want to play.' It's the material that I want to do justice to."

What Golding is saying is what many actors of color have always dreamed about: the opportunity to play the romantic interest instead of the punch line; the chance to star as an action hero instead of the I.T. guy; the choice to step into the shoes of John Smith or Kim Lee or anyone by any name. When it hits theaters, Crazy Rich Asians just might give Hollywood the green light to finally do that — starting with Golding himself.