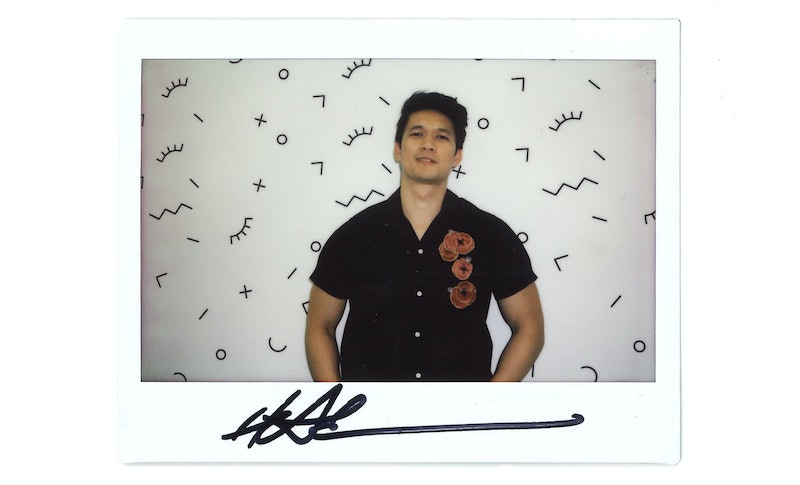 When celebrities hang out with Bustle editors, we want to give them the chance to leave their mark. Literally. So we hand them a pen, a piece of paper, a few questions, and ask them to get creative. The rest is up to them. This time, Crazy Rich Asians and Shadowhunters: The Mortal Instruments star Harry Shum Jr. is leaving his mark in the Bustle Booth.

Nerd, techie, overachieving straight-A mathlete — these are the kinds of Asian stereotypes audiences are used to seeing onscreen. A mysterious, sexy man who pops up to tease a sequel is not one of them. Neither is a queer, immortal warlock who rocks eyeliner and styles his hair so it stands five inches above his head. And yet Harry Shum Jr. has played both of those characters — in the hit film Crazy Rich Asians and the Freeform show Shadowhunters, respectively. And, as he tells Bustle during a stop at our New York City offices, making and breaking stereotypes is kind of his thing.

"What's fascinating me is how one role can completely switch people's perspectives on a group of people," he says. And so, the actor's game plan for changing how Asians are seen onscreen is actually very simple: make new stereotypes, break them, and repeat.

"It's a hard thing for people to digest when I say 'create new stereotypes' because, sometimes, that's the only way people can identify things," he says. The trick is not to let these new stereotypes linger for long. "Then you smash them, and you keep creating new ones." The actor calls it his way of "gaming the system."

This evolution of stereotypes can be seen through the lens of Shum's career. The actor's breakout role as Mike Chang in Glee literally had him playing a character who was commonly called "Other Asian." His next major role came in Shadowhunters playing Magnus Bane, the aforementioned immortal warlock, theoretically creating the stereotype of the "magical Asian." Now, as Shadowhunters wraps up its final season, Shum is getting ready for the Crazy Rich Asians sequel, which, if it follows the storyline of Kevin Kwan's book series, will find him in the role of the romantic leading man.

Currently, in no small part due to CRA, Asian men in Hollywood are having a bit of a heartthrob moment. And the Asian male heartthrob stereotype is one that Shum himself is already portraying on Shadowhunters as one half of a beloved "Malec" ship. "I don't know if people think — which is still weird to me — [that I'm] a heartthrob or whatever it is," Shum says, laughing.

Well, they do, and he is. Shum's charming answers to our Bustle Booth questionnaire will only amplify his heartthrob status.