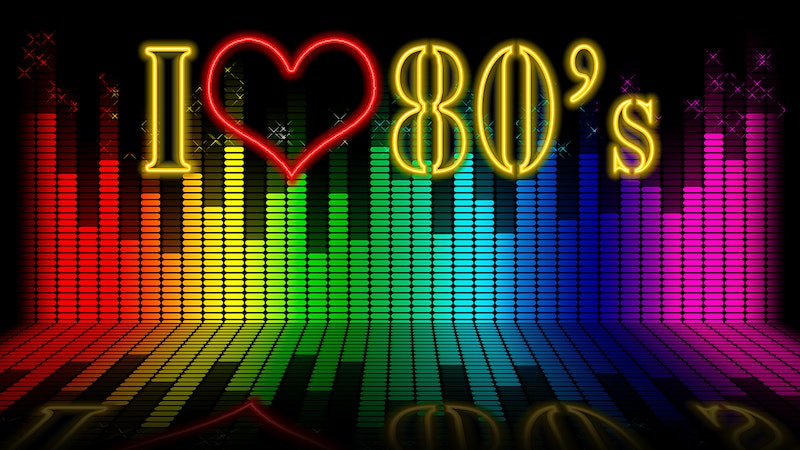 The '80s was a decade of epic excess, timeless teen movies, and poor fashion choices. While I hope parts of this decade never make a comeback, Halloween 2017 is a perfect time to resurrect the '80s. And, these creative '80s Halloween party ideas are super easy to put together so you can enjoy one night only in the '80s as a grown-ass woman. Choose a theme from music, movies, or pop culture, and you can even serve '80s food and drinks, like Tab and Cool Ranch Doritos.

"The fingerprints of the decade best known for Pac-Man and the personal computer are everywhere in our daily lives: The first launch of NASA’s Space Shuttle triggered a technological explosion in global communications that now makes our world-wide love affair with smartphones and the internet possible; when Madonna rolled around on stage in a wedding dress at a music awards show, it sent shock waves through a celebrity-hungry world that can’t get enough of “Gangnam Style” and Lady Gaga today," National Geographic said about the '80s in the description for its series The '80s: The Decade That Made Us.

Go back in time to the decade where too much was never enough with these creative '80s Halloween party ideas for Halloween 2017.

Before Mother Monster was born, the Material Girl reigned supreme, especially when she first his the scene in the '80s. Throw an '80s Madonna-themed party for Halloween 2017. This is super easy. Just ask everyone to come dressed in one of Madonna's iconic '80s looks, and play Madonna's '80s classics all night long. Bonus is you can play the music from a cassette tape on a boombox.

The '80s was also a time when people go super creative with their fitness routines. Everyone was obsessed with Jane Fonda and Richard Simmons exercise videos, and going to jazzercise classes while wearing neon unitards, leg warmers, headbands, and plenty of eye shadow. For your '80s Halloween party, focus on the funniest aspects of the fitness industry from the '80s. I mean, come on, when will you ever get the chance to wear one of these get ups IRL?

3. Glow In The Dark Glam

OK, the '80s had some seriously weird TV shows, like ALF, which was about an alien who lived with a family and kept trying to eat their cat. If you've never been subjected to this absurdity, ALF is now available on Hulu. If you're looking for an easy and creative '80s party idea for Halloween 2017, ask everyone to come dressed as a character from an '80s TV show or movie. Then, stream some epic '80s TV shows and movies on mute while you play a mix of '80s music all night long.

If you and your friends love a good scare, consider dedicating Halloween 2017 to '80s horror movies, and ask everyone to come dressed as a character from their favorite '80s horror film. The '80s brought us scary AF movies like Friday The 13th, A Nightmare On Elm Street, Poltergeist, Gremlins, Child's Play, The Fly, The Lost Boys, and more. And, you might not know that Child's Play and A Nightmare On Elm Street are both based on true stories. You can have a movie-marathon party, or just party in your scary '80s horror movie costumes, it's up to you.

This one is super fun if you like to sing, or you want to get your rock start dreams out of your system. For your never-to-be-forgotten '80s karaoke and costume party, ask everyone to come dressed as their favorite '80s musician — the bigger the hair the better. Next, rent a karaoke machine and spend the night belting out tunes from your favorite '80s bands. Here are some '80s songs to get you started: "Thriller" by Michael Jackson, "Like a Virgin" by Madonna, "Every Breath You Take" by The Police, "When Doves Cry" by Prince, "Walk This Way" by Aerosmith and Run DMC, "Call Me" by Blondie, "Livin' On a Prayer" by Bon Jovi, "Pour Some Sugar On Me" by Def Leppard, "Hungry Like the Wolf" by Duran Duran, and "Sweet Child o' Mine" by Guns N' Roses.

There are some activities that are so uniquely '80s that you can make an entire party out of them. I don't know if it was the preservatives sprayed on salad bars — that were later found to get many people deathly ill — that gave people in the '80s some of these crazy ideas, or if they just knew how to have more fun than people in the 2,000s. But, these '80s party-activity ideas are all totally rad, and you're absolutely going to get FOMO if you don't try them.

For Halloween 2017, make it a night of '80s contests that includes a breakdancing contest, a lip-syncing contest, an air-guitar contest, a moon-walking contest, and a Rubik's cube contest. Give the winner something totally '80s as a prize, like a candy necklace or a poster of Lisa Turtle from Saved By The Bell.

While spending one night in the '80s is sure to be far out for Halloween 2017, you might be tired after all of that jazzercise and breakdancing. The good news is that — at the stroke of midnight — you can travel back to the future where it's still 2017, and everything doesn't glow in the dark.