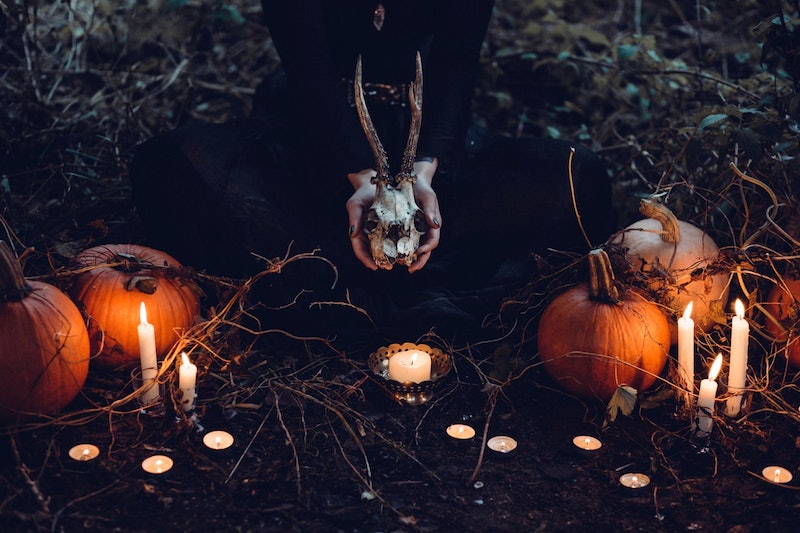 Whenever you hear a ghost story, or watch American Horror Story, you probably immediately go down a Google rabbit hole to find out if these scary stories are actually true. And, sometimes they are, like these famous ghost stories for Halloween 2017 that are true, and so scary that they will give you nightmares. If you've never had a paranormal experience, you might be reluctant to believe that hauntings are real, but so many people have had encounters with the supernatural that they can't all be making it up.

Television shows and horror movies are often based in fact, however miniscule. For the people who have had encounters with ghosts, their experiences are absolutely real to them. And, it's hard to discount multiple scary stories that take place at the same location, like the Hotel Cecil in Los Angeles, which has a long history of strange activity and was the inspiration for American Horror Story: Hotel.

I've had my share of paranormal experiences, as have many people in my family. A few years ago my cousin and I stayed at the famed Chelsea Hotel in New York City before it was closed to the public. Travel + Leisure named the Chelsea as one of the most haunted hotels in the world.

Among other creepy activities, the Chelsea is the place where Sex Pistols singer Sid Vicious allegedly stabbed his girlfriend Nancy Spungen to death in 1978. He died before police could determine if he was actually the killer. And, while we were there my cousin, who wasn't familiar with the history of the hotel or Sid Vicious, claims to have had an encounter with the spirit of the English rocker while she was in the shower. Above is a creepy picture of us in our room on the fifth floor.

I had gone out to get us some snacks, and while I was away she took a shower. She felt immediately uneasy, and later told me that she sensed a strong presence standing behind her while she was washing her hair. She says she heard a man whisper in her ear "get out," then she quickly saw the man before he vanished. When I came back she had barricaded the door closed, and was in a panic. Later, when we were walking through the hallways of the Chelsea, we came across a painting of Vicious and she stopped cold. "That's who I saw," she told me. "He wants us to leave."

I then told her the history of the hotel, and what happened in room 100 in 1978. According to the website Real Paranormal Experiences, what happened to my cousin is not uncommon. "The apparition of Sid Vicious has been seen in the elevator, helpfully opening and closing the doors and operating the buttons," the website reported.

Now, I did not feel anything sinister at the Chelsea, but I have been obsessed with the hotel since I was 17. I was aware of the history, and being there actually made me feel inspired. However, my cousin was relieved when we checked out the next morning.

Perhaps you've seen the movie The Conjuring, which details the paranormal experiences of the Perron family after they moved into a farm house in Harrisville, Rhode Island, in 1970. This story is actually true, and the family has called the movie an accurate depiction of what happened to them during their 10 years there at the hands of menacing spirit, and former resident, Bathsheba Sherman.

During her lifetime in the 1800s, "Bathsheba filled the role of housewife while her husband Judson worked as a farmer on their land. Fairly well-off, Bathsheba and Judson had a son, Herbert L. Sherman, born when Bathsheba was approximately 37 years of age in March of 1849," History vs. Hollywood reported. "It is possible that they had three other children as well, all of whom did not survive past the age of seven, though no census records could be found to confirm these reports."

While other spirits are said to have haunted the family, Bathsheba was the only one reported to be set on wreaking havoc on the Perron family, particularly the mother Carolyn whom Bathsheba allegedly even possessed at one point. While she was alive, Bathsheba was accused of being a witch due to the premature deaths of her other children and the death of another infant in her care, which the video Edge of Nightfall (above) claims was caused by a sewing needle being inserted into the child's brain. It's reported that Bathsheba also used a sewing needle to torment Carolyn. And, the Perron family aren't the only ones who have experienced supernatural activity while living in the house.

OK, The Exorcist is a movie I've seen once, and will never see again because it's scary AF. My dad's sister found it so frightening when she saw it in 1973 that she had to move back in with my grandparents (or so I'm told since I wasn't born yet). The reason this movie is so scary is that it's based on a true story.

According to Mental Floss, a Washington Post article from 1949 with the headline "Priest Frees Mt. Rainier Boy Reported Held in Devil's Grip" followed Jesuit priests William S. Bowdern, Edward Hughes, Raymond J. Bishop, and Walter H. Halloran participating in the rite of exorcism on a boy with the pseudonym "Roland Doe" in Maryland.

"According to the priests, they allegedly experienced the boy speaking in tongues, the bed shaking and hovering, and objects flying around during the ordeal," Mental Floss reported. "The exorcism was one of three official Catholic Church-sanctioned exorcisms in the United States at the time."

The director of The Exorcist, William Friedkin, told Time Out that the coverage of the Roland Doe exorcism by the Washington Post leant the story some credibility. "Maybe one day they’ll discover the cause of what happened to that young man, but back then, it was only curable by an exorcism. His family weren’t even Catholics, they were Lutheran," he told Time Out.

"They started with doctors and then psychiatrists and then psychologists and then they went to their minister who couldn’t help them. And they wound up with the Catholic church. The Washington Post article says that the boy was possessed and exorcised. That’s pretty out on a limb for a national newspaper to put on its front page. I don’t think you’d see that too often nowadays. Possibly in a Murdoch paper. But you’re not going to see that on the front page of an intelligent newspaper unless there’s something there."

The 2002 film The Mothman Prophecies depicts characters seeing a giant moth-like creature appear before catastrophic events. While this might seem like an episode of the X-Files, this story is actually based on real occurrences in the small, tight-knit community of Point Pleasant, West Virginia, during 1966 and 1967, according to The Mothman Documentary. Dozens of townspeople claimed to have seen the Mothman, described as a 7-foot tall bird-like creature.

Of all of the ghost stories and horror movies, Nightmare On Elm Street is the one I thought would be the least likely to be based in reality. However, the inspiration for the Wes Craven movies came from a real-life story published in the Los Angeles Times in 1987. "Since April, 1983, at least 130 Southeast Asian refugees have left this world in essentially the same way," the article stated. "They cried out in their sleep. And then they died."

While this seems totally unrealistic, in some cultures there is actually a name for this. "In the Philippines, it's called bangungut, in Japan pokkuri, in Thailand something else," Dr. Robert Kirschner told the Times. "But it all roughly translates as the same thing: nightmare death."

The deaths all came from the same community, the victims were all people who allegedly had no symptoms of ill health, and they all died while having nightmares. Autopsies revealed that some of the victims of nightmare deaths died by sudden heart stoppage, and the coroner also found something else strange.

"All of the 18 hearts [I examined] were slightly enlarged, and 17 showed defects in their conduction systems, the array of fibers that carries electronic impulses from the brain to the heart," the Times reported. "The fibers were frayed and curled, as if, Kirschner says, "'their hearts just shorted out.'"

Because all of the victims examined by this coroner had the same genetic defect, one theory is that the defect in tandem with the nightmares caused their hearts to stop. If you're scared this could happen to you now that you know that Nightmare On Elm Street is based on a true story, the Times reported that nightmare deaths are only found in certain Asian populations: Laos, Cambodia, Vietnam, as well as the Philippines and Japan.

This is another one I had no idea was based in reality. Apparently the writer of Child's Play, which features demonic doll and killer Chucky, is based on Robert Eugene Otto's real life experiences growing up with a cursed voodoo doll in Key West, Fla. According to the video Robert The Doll: The True Story Of Child's Play, Otto talked to the doll when he was a child, his family would find things missing or moved in his room, and they regularly heard him screaming at night.

Honestly, I find dolls super creepy, but if you also want to pair a scary game with this paranormal doll story, check out the game Hide and Seek Alone, which involves some scary AF play-time with a doll. Scared yet? If you still don't believe, and want some more fear fodder for Halloween 2017, check out these other horror stories based on real-life events.

More like this
15 Matching Halloween Costumes For You & Your Dog
By Kirsten Nunez
Your Daily Horoscope For August 19, 2022
By Alexandria Lettman
How To Use Astrology In Dating, According To The AstroTwins
By Brittany Beringer
Here’s How Mercury Retrograde September 2022 Will Affect Your Zodiac Sign
By Nina Kahn
Get Even More From Bustle — Sign Up For The Newsletter