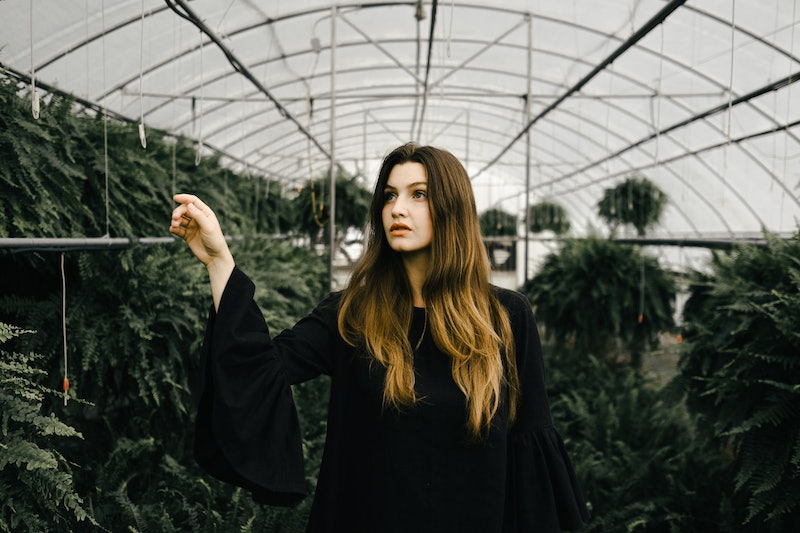 As the ruler of communications and technology, when Mercury goes into its backspin four times a year, the planet is essentially asleep at the wheel, which results in myriad technical and communication breakdowns — like the massive Equifax data breach that was discovered July 29, during Mercury Retrograde. Sometimes you have to laugh so you don't cry, which is why the idea of Mercury Retrograde offers plenty of creative ways to poke fun at what is often a frustrating time.

I mean, there's nothing funny about a computer crash, a misunderstanding with a loved one, of your maps app failing you and directing you to drive into a lake. But, it is pretty wild to think that all of these things are more likely to occur during Mercury Retrograde. If you want to turn your frustration into a Halloween costume, these creative Mercury Retrograde costume ideas for Halloween 2017 are for you.

OK, so this is where the talents of both Lady Gaga — who can pull off every kind of crazy hat, and DIY queen Martha Stewart — who is crafty AF, can come together. Maybe these two should have a TV show; someone please make this happen. If you want to literally dress as Mercury Retrograde, find an all gray, or silver, outfit, and really commit. Dress from head to toe in your hue of choice. Then channel your inner Gaga, and follow Stewart's steps for making your own planetary headdress.

Here's what Stewart says you'll need, according to her website: Corrugated cardboard, a utility knife, a pen, acrylic paint, dot stickers, glitter, felt, silver or gray tape, a hole punch, and elastic. Next, choose how big you want your planetary headdress to be. Remember, if it's too big, you'll likely be hitting other people in the head with it... which is probably fitting for Mercury Retrograde, but please, be courteous of others.

Now, it's time to decorate your Mercury hat. Prime and paint cardboard with acrylic paint, add dot stickers and glitter, fold a one-inch strip of felt around inner opening, and glue. Trim the outer edge with silver tape, then punch holes on either side of opening just above where your ears will be ears. Then, tie on the elastic.

You can also do your entire face in silver makeup for added effect. The final step is that because you're not just Mercury, but Mercury Retrograde, you'll need to commit to walking backward all night.

Dress As A Communication Breakdown

So, you probably know that communicating something important over text message can result in misunderstandings. The recipient can't see your facial expressions, or hear your vocal cues in a text. Between communication breakdowns and technical malfunctions, misunderstands are pretty common during Mercury Retrograde.

If you want to dress as a Mercury Retrograde communication breakdown for Halloween 2017 all you need some blank white stickers, similar to the "Hello My Name Is" stickers. Next, get a marker and cover the stickers with epic fail text message misunderstandings. If Mercury Retrograde gifted you with an abundance of these during her last go 'round, use your own. Or, check out some of the funniest text message misunderstandings online.

Be A Mercury Retrograde Meltdown

Meltdowns are totally normal during Mercury Retrograde due to all of the communications and technical problems. If you want to go as a Mercury Retrograde meltdown for Halloween 2017 just follow the instructions for the Mercury Retrograde costume above, and add some sad-face effects with makeup to look like you've been having a dramatic meltdown.

The, create your computer body from a cardboard box, and follow the directions on Education.com to design your computer body. However, for the computer screen you can substitute what they recommend with your own clever computer crashing messages that a user might receive before a total computer meltdown.