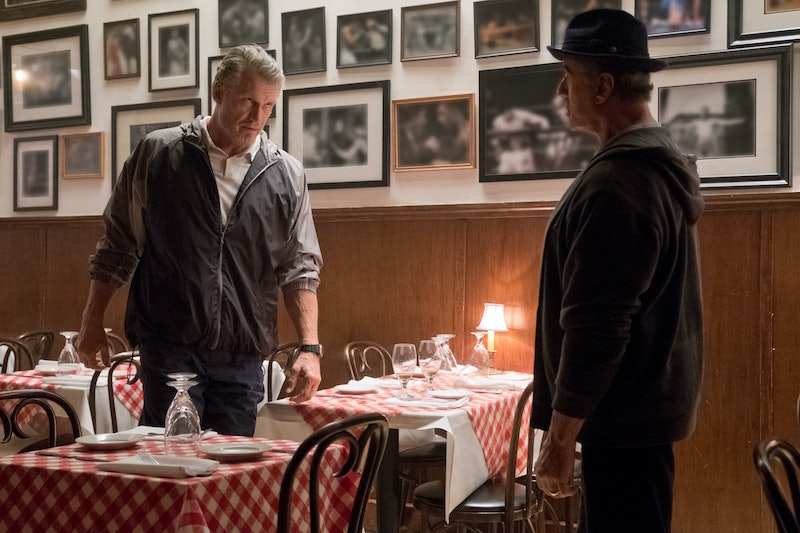 There are a lot of things that make a good villain — an intimidating demeanor, a threatening stare — but in Creed II, what makes Viktor Drago such a good antagonist for Adonis Creed (Michael B. Jordan) isn't so much his stature (though his size is quite impressive), it's his history. The main villain of Creed II isn't just a talented boxer, he's the son of Ivan Drago, and he's got a score to settle with Adonis and Rocky Balboa (Sylvester Stallone). But unlike in Rocky IV, this Ivan Drago isn't an onscreen representation of the Soviet Union (a convenient Hollywood enemy for the American Rocky), he's just a father looking to his son to right his wrongs. And for actors Dolph Lundgren and Florian Munteanu, the three-dimensional villains in Creed II gave them the opportunity to introduce something new to the Rocky franchise.

"When you had the villain in those Rocky movies, and the movies in general, the villain was not very layered," Munteanu, who plays Viktor, tells Bustle during the movie's Philadelphia press junket. "[Drago] was pretty monotone, just a killing machine without emotions."

His assessment may sound harsh, but it's not altogether untrue. In Rocky IV, Drago did kill Apollo Creed in the ring without any remorse. But in Creed II, the villain — if you choose to call him that — is almost entirely driven by his emotions. "People get to know the villain more and understand why he does specific things," Munteanu say of his arc in Creed II. "You get understand the villains more, people get to know the villains more, and [they] really show more heart right now."

Lundgren, his onscreen father, agrees, noting that this time around, he was given a chance to really deepen the character of Ivan Drago. "For me, it was obviously a big deal to play this guy again, especially to get such a great script," Lundgren says. "A wonderful chance to play something more complex than I've done in most of my other films."

Creed II adds dimension to Drago's character by looking at what happened to him after Rocky beat him in the ring, and how it affected both is socio-economic status and his relationship with his only son, Viktor. "It's about his father who has a lot of issues and a lot of anger and a lot of pain for what was done to him, and he's trying to get his revenge on the world through his kid, which is quite complex," the actor says, noting that he could relate to the tense father-son dynamic personally. "It hit a lot of chords deep for me that meant a lot, and it was cool to do it on camera and show it through this guy, Ivan Drago."

In the film, Ivan has trained Viktor to be the ultimate fighter, seemingly for the sole purpose of regaining his family honor and getting revenge on Rocky, the man who took it all away. The result is an antagonistic relationship of impossible expectations and emotional distance. Ivan's treatment of his son seem cruel, but, without spoiling the film, his love for his son is there. "This film is much more mature than some of the other movies where the bad guy is just a bad guy, not a human being. So it adds a lot of layers to the franchise," Lundgren explains. "I've done a lot of films that are about violence, and that are about killing the bad guy and all of that," he adds. "And those are like cartoon movies."

Creed II is clearly a special project for Lundgren, who says he hopes that audiences, especially men, will feel encouraged to embrace their emotions after watching the film. "Maybe some father will sit there and watch the film and it will make him reflect on what he did to his kid," the actor says, thoughtfully. "I hope so."