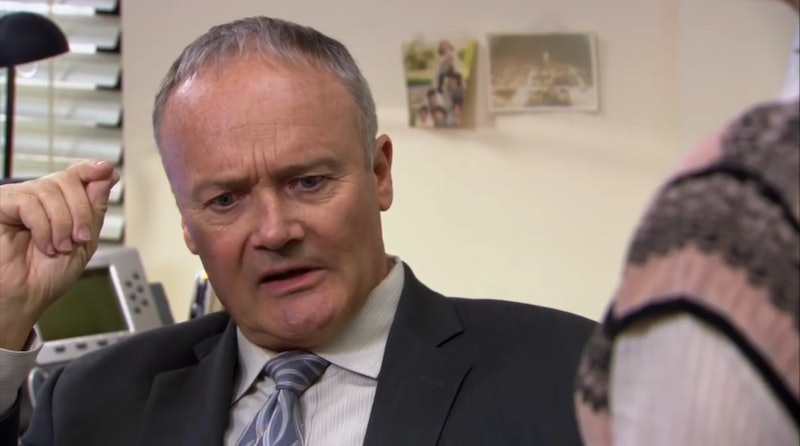 TV buffs know Creed Bratton best as his Dunder Mifflin Paper Company alter-ego — a man of the same name who never quite made sense, but whose hilarious air of mystery made him one of the most intriguing characters on television. And now that sources have told The Hollywood Reporter that NBC is considering a potential Office revival, there's reason to hope that Creed and his one-liners will be back. Speaking over the phone in early February, Bratton says he would reprise his role as Creed on a rebooted version of The Office, though he hasn't been approached by anyone tied to the potential project. (NBC has yet to confirm reports of a revival.)

"Yeah, I guess if they approached me [and said], 'Would you like to do the Creed character?' — why not?" Bratton says. Bratton does note, though, that it could be an uphill battle for a new version to live up to the success that accompanied the original run of the workplace drama, which aired on NBC for nine seasons, from 2005 to 2013.

"How would you do it?" he asks. "You talk about iconic. It’s one of these things that’s become integrated in the consciousness. 'That’s what she said' is a catch phrase now."

Though he's skeptical of how a reboot would play out, Bratton believes there could be some potential in the idea. "If there were all these younger kids and some of us old characters still there, they brought in new people, and it was funny — would they get the magic?" he says. "It’d be doubtful, but it could happen. Would lightning strike twice in the bottle? I don’t know." The musician and actor would be in, he says, regardless of the risk.

But there's much more to Bratton than his kooky persona on The Office. And though that may be what he's best known for, he continues to find success in his other passions. Bratton is also an accomplished musician, with six solo albums under his belt and a seventh — "While The Young Punks Dance" — slated for release this coming April. The solo career follows his time with The Grass Roots, a hit rock group originating in the 1960s. He'll also appear later this year in The Sisters Brothers, a film about a pair of brother assassins in the old West, starring Joaquin Phoenix and Jake Gyllenhaal. But he continues to look back fondly at his time on The Office, despite his continued desire to expand his horizons.

“It’s the gift that keeps giving," he said of the show, noting that with his character, he was able to deliver incredible one-liners and memorable jokes without necessarily spending all that much time onscreen. “That’s just not me, that’s the writers who gave me these beach balls to hit. … These lines were so perfect, you know? Some of them were non-sequiturs, and I believe that it got more [to the point that] I could almost say anything."

He's not wrong — over the course of the series, Dunder Mifflin's Creed claimed to have four toes, have spent time in an iron lung, and possess an overwhelming desire to scuba dive. One of my personal favorite moments is when he showed up to work covered in unexplained blood spatters only to find out it was Halloween, which allowed him to blend in. Creed was always the strangest guy existing in an office already full of weirdos, and that's what made him so fun to watch.

The show has been off the air for years now, but new audiences continue to discover it through Netflix and syndicated episodes that air on TV. Bratton says he often encounters fans who are quick to share their feelings on how The Office has affected them.

"People come up to me and they tell me how much the show means to them. They sometimes come up to me and hug me and cry, and they say, 'We’ve seen the series two or three times through, we love you, you make us laugh, we wait for you to come on,'" he says. "And I shake my head in disbelief. I used to think maybe they were, you know, blowing smoke up my ass. But I’ve realized that’s just not true, they love the character, and I’m just a lucky guy.”

It's clear that though Bratton's moved onto plenty of other success — he tells me he's already got an eighth album in the works before his seventh even releases — The Office still has an impact on his life. I tend to agree that it'd be extremely difficult to capture the magic of the original seasons, but having Creed back at his old desk certainly wouldn't hurt.

More like this
How The Thanksgiving Episode Of 'Gossip Girl' Changed Pop Culture History
By Gabrielle Bondi
The 'Kenan & Kel' Reunion On 'SNL' Took A Dramatic Turn, Thanks To Keke Palmer
By Brad Witter
The First Trailer For 'That '90s Show' Includes So Many Nods To The Original Series
By Jack Irvin, Alyssa Lapid and Grace Wehniainen
Elizabeth Debicki On Her Approach To The Most Debated Scene From 'The Crown'
By Grace Wehniainen
Get Even More From Bustle — Sign Up For The Newsletter