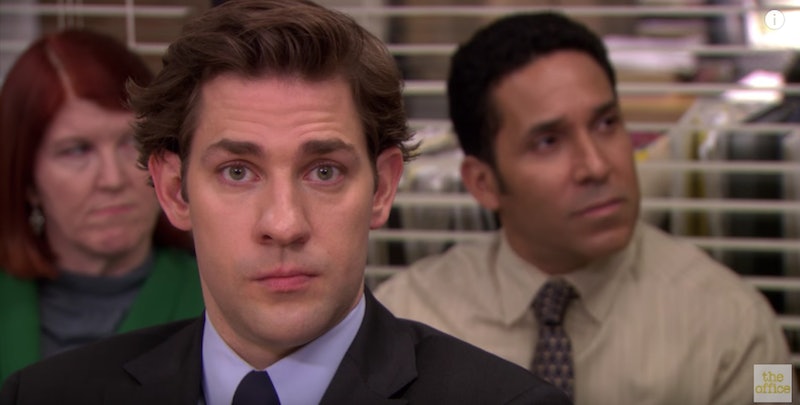 It’s been more than four years since The Office watchers bid a tearful farewell to the team at Dunder-Mifflin Paper Company, but rumor has it that a reboot might be in the works. Reports indicate that The Office could return as soon as 2018, and the show’s fans are pretty excited about it. Bustle has reached out to NBC for comment.

According to TVLine, sources confirmed that the network is in talks to produce a revival of the show that would air during the 2018-2019 season. Steve Carell's character, Michael Scott, would reportedly be absent from the reboot, but some of other familiar cast members would remain.

Fans have been chatting about an Office revival since August, when Deadline reported that NBC Entertainment Chairman Bob Greenblatt told reporters he had discussed the idea with the creator of the U.S. series, Greg Daniels: "We often talk about The Office, I’ve talked to Greg four times over the past few years. It’s always, ‘maybe some day but not now."

Even though NBC has not yet confirmed that there is indeed a revival of the hit television series in the works, Office enthusiasts are nonetheless freaking out about the possibility of being reunited with Jim and Pam (John Krasinski and Jenna Fischer), Dwight Schrute (Rainn Wilson), Kelly Kapoor (Mindy Kaling), and the rest of the Dunder-Mifflin crew.

Not everyone is psyched, though, about talks of a revival. UPROXX music writer Corbin Reiff wrote that the finale was perfect, and that bringing the show back would be a terrible idea.

The series finale of The Office chronicled the lives of the cast as if they had starred in a real documentary, as Dwight gets married to Angela Martin, and Jim weighs the possibility of a new job in Texas. The inventive structure was generally praised by critics, and left lots of viewers satisfied. As New Yorker critic Emily Nussbaum wrote of the last episode:

I laughed, I cried, I kvelled, I nodded along, I ignored doubts, I admired zingers, I marvelled at the restrained use of flashbacks. I loved seeing every love triangle (the show’s specialty) solved like a math problem. And I was fascinated by how the conclusion seemed to reflect back on its own genre.

It makes sense, then, that some might be hesitant about an Office revival.

As one user on the very active Dunder-Mifflin subreddit wrote, "The ending was basically perfect...A reunion special (movie?) would be one thing, but there’s no reason to bring back the series."

There's another big reason some fans are hesitant to cheer for a possible return of the show: Michael Scott, the boss everyone loves to hate, wouldn't likely be part of it. NFL player Kenny Allen tweeted that "Office without Michael is just a plain office," warning that going on without Carell's hit character could ruin the show.

By the time the finale aired, Carell had not been on the show for two seasons (although he did make an appearance on the series' last episode). Some, like AL.com producer Matt Scalici, think Carell was what made the show so successful, and it would be unwise to do another season without him.

While some are divided over the idea of an Office reboot, NBC has had success with the recent revival of the early 2000s sitcom Will & Grace, and there's no doubt that Dundler-Mifflin devotees would have fun predicting what's next for the characters. Will Pam open up an Etsy shop, as one Entertainment Weekly editor predicted? Are kids on the horizon for Dwight and Angela? Only NBC knows, and by 2018, so might The Office's most devoted fans.