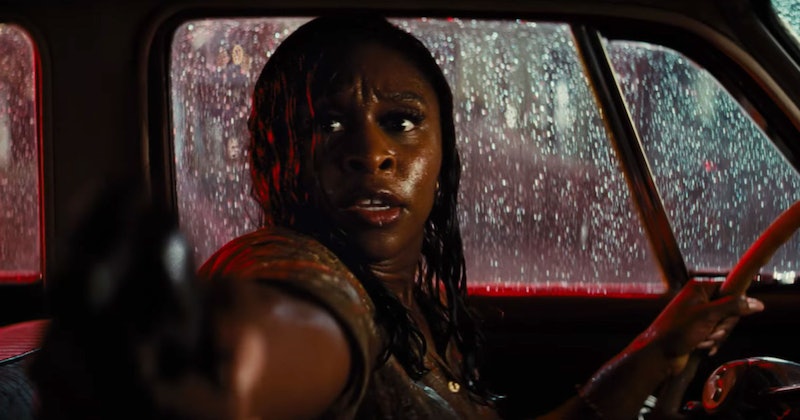 Cynthia Erivo became one of the biggest breakout stars of the year, starring in Widows and Bad Times at the El Royale. But her role in the latter as Darlene Sweet in the Drew Goddard thriller proved to be the perfect one for the Broadway star, allowing her to show off her musical talents and acting chops portraying the soul singer, who is one of the main protagonists in this thriller. Cynthia Erivo sang live in Bad Times at the El Royale, and the Tony winner was more than up for the challenge.

In the exclusive featurette below, Erivo talks about the amazing opportunity to sing onscreen for the first time — but it was no easy feat. “One of the things I really loved about doing this was that I had the chance to sing in real time, so every time you see me sing in a room, wherever, it’s happening in that room and I’m singing for real. There’s no pre-records,” explains the actor.

But, in films, scenes often have to be filmed multiple times in order to get the perfect shot, which is far from Erivo’s experience singing live onstage. And her ability to do so left an impression on producer Jeremy Latcham. He explains that while filming the scene where Laramie (Jon Hamm) finds the secret passageway that uncovers the two-way mirrors in each room, including the one where Darlene is practicing, Erivo embraced the challenge. “We filmed that 27 times, and she performed that whole thing 27 times all the way through without even flinching,” says the producer.

Latcham also mentions that the scene where Darlene is singing to cover the noise Doc makes while digging was filmed 20 times because the crew had to make sure the camera, lights, and everything on set was perfect. But Eviro remained unfazed, perfecting each shot.

And music producer Harvey Mason Jr., who worked on the soundtrack for the film and has produced work by icons like Michael Jackson, Aretha Franklin, and more, praises Eviro’s way of bringing her musical talents to the big screen. “Usually to record onset is not something that people are brave enough to do. But Cynthia can really, really sing,” notes Mason Jr. “Recording live is not a problem for her. She’s very strong from her day on Broadway. And she’s very accurate; she can do the same thing over and over again, and sing with emotions, feelings, repeatedly."

Erivo has been part of many West End and Broadway productions, including two years on Broadway as Celie Harris Johnson in The Color Purple, starring alongside Jennifer Hudson and Orange Is the New Black’s Danielle Brooks. She might not be a household name yet, but she showed that her Broadway days were actually instrumental in helping her transition into becoming a star on the big screen, too.

To writer/director Goddard, the film was “a love letter to music,” so it was extremely important for the film to have a talented star who could perfectly show how vital music’s role is in the story. And despite her new arrival on screen, Eviro shows that her talents fit in perfectly with the rest of the film’s A-list cast. Bad Times at the El Royale is available on 4K Ultra HD, Blu-ray and DVD right now.