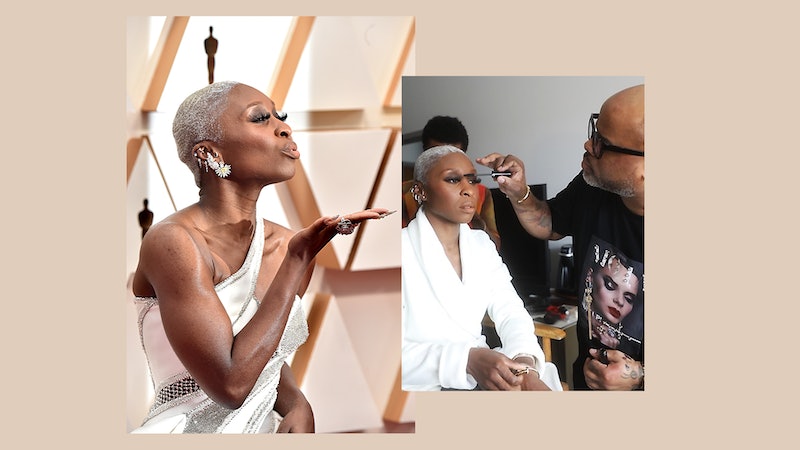 Cynthia Erivo may not have walked away with a golden statue last night at the 92nd Academy Awards, but she still slayed the red carpet. And captivated the audience with her performance of "Stand Up." And wowed the world with her entire head-to-toe ensemble. Cynthia Erivo's 2020 Oscars makeup look secured her spot as Hollywood royalty — which was her makeup artist Terrell Mullin's ultimate goal.

"This is her night, so we wanted her beauty [look] to complement her natural beauty and radiant skin," says Terrell Mullin. Because Erivo wore a white custom Atelier Versace gown, Mullin decided to go with a classic, old Hollywood makeup look featuring a brown smoky eye, big lashes, and a nude lip.

First, Mullin prepped Erivo's skin with Armani Beauty's Luminous Silk Hydrating Primer, followed by Luminous Silk Foundation in two shades — a deeper hue to outline her face and a lighter one for her T-zone and cheekbones. To warm up her skin, he used Neo Nude Compact Powder Foundation in a deep brown with cool undertones on her edges and temples, and he created a soft flush by applying magenta Neo Nude A-Blush on the apples of her cheeks.

The look, though, was really all about Erivo's eyes. "She uses her eyes to tell a story," Mullin tells Bustle. "Having the opportunity to enhance her eye look really ‘made’ the look.”

To create Erivo's dramatic smoky eye, Mullin first applied Smooth Silk Eye Pencil in 12, a red brown eyeliner, and smudged it out. Next, he swept Eye Tint Liquid Eye Shadow in 39 — a warm, shimmery brown — across the lid. To complete the look, Mullin used Eyes To Kill Eye Quattro Eye Shadow palette in 2, blending the darkest shade into the crease. He topped it off with beautiful, fluffy lashes.

Mullin tells us that Erivo felt so beautiful in her Oscars look that she cried after slipping on her Atelier Versace dress. "She felt absolutely gorgeous," he says. "Luckily, we were able to fight back tears when the look was complete."