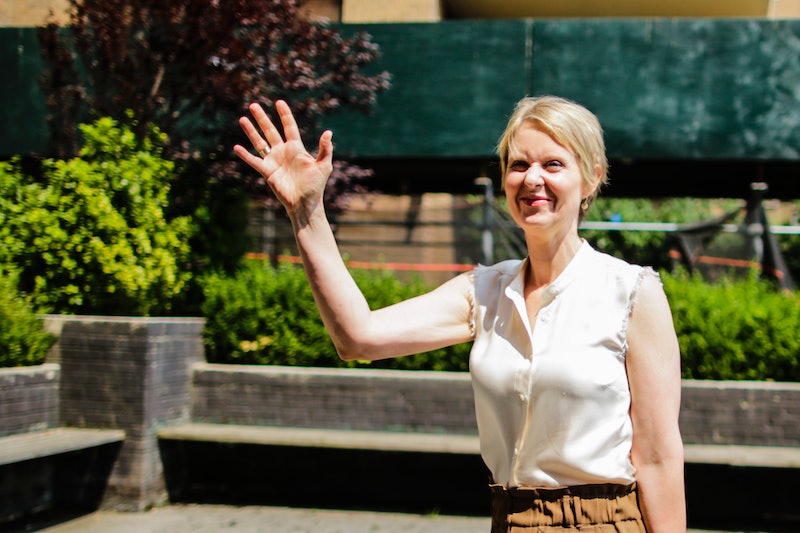 Even though it's only the Democratic primaries, Cynthia Nixon has come out looking like a true fighter in her race with incumbent New York governor Andrew Cuomo. Now, she's making a fiery demand regarding their upcoming debate, scheduled to take place on Wednesday at Hofstra University — almost literally. Nixon requested that the temperature of the debate hall be raised to 76 degrees, because according to her team, normal temperatures in working spaces are “notoriously sexist."

Rebecca Katz, one of Nixon's top campaign strategists, wrote an email to debate host WCBS-TV, according to the New York Times. It accused the station of only paying attention to Cuomo's demands and made the request about the temperature. Normal working conditions, she said in the email, were “notoriously sexist when it comes to room temperature, so we just want to make sure we’re all on the same page here."

This request could have been targeted directly at Cuomo himself, as the Times reported all the way back in 2011 that he prefers to make appearances in very cold rooms. However, there is actual science backing the claim that normal temperatures in offices favor men, according to the Times — and lots of women are empathizing with her demand.

The Times wrote in 2015 that offices generally set their temperatures based on a "thermal comfort" formula that takes into account various factors like body heat and air flow. One of its variables is resting metabolic rate, though, and the commonly used formula uses the resting metabolic rate of a man who's 40 and weighs 154 pounds. According to the Times, this is likely because the formula was devised in the 1960s, when most office workers were, in fact, men. That doesn't apply now, though, and women have a much lower resting metabolic rate — which leaves them freezing if offices follow that standard formula.

There's a good reason, then, why Marie Claire had to write an article about summer layering options for cold offices. Nixon, evidently, does not want to spend any time thinking about how to layer for her upcoming debate.

This seems to be resonating with many women on Twitter, who may or may not be sitting in an office wrapped in a blanket at this very minute.

"Cynthia Nixon asks for the debate hall to be 76 degrees, and I'm sitting here in my work Snuggie wondering if this is actually the opening salvo of the revolution," wrote Washington Post columnist Monica Hesse on Twitter.

"Cynthia Nixon's campaign asked for the debate hall tomorrow to be 76 degrees. I wish I had this kind of power in my office and could ditch my two work sweaters," wrote BBC producer Ashley Semler, also on Twitter.

Not everyone agreed with the sentiment, however. One Twitter user wrote that "Cynthia Nixon asking for the debate hall to be 76 degrees is un-sweaty privilege," another sentiment that will certainly be relatable for many people.

According to the New York Times report, Nixon's team hasn't heard back about the request, and the strategist said that 76 was just their opening offer. The Cuomo campaign told the Times that it didn't know anything about the temperature in the debate hall. Whatever the temperature ends up being, though, it looks like one of the candidates will find himself or herself disappointed.