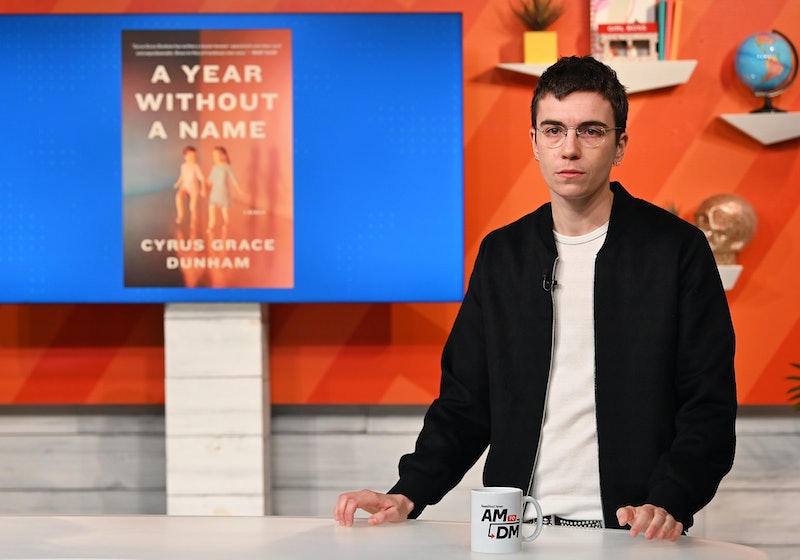 “What does it feel like to have a name?” Cyrus Grace Dunham asks the crowd of queers packed into Brooklyn’s St. Ann & the Holy Trinity Church in October last year for the release of their memoir, A Year Without a Name. It's a rhetorical question, and the crowd doesn't respond — they've gathered to hear Dunham talk about their own experience, and they most certainly won't be disappointed. A Year Without a Name is a challenging inquiry of personhood, and Dunham, who uses they and he pronouns, writes generously and unrelentingly about their identity, their choice to undergo top surgery, and the ways their transness intersects with their fame and whiteness.

“I catalogued my own supposed identities. Woman: I’d already failed at that. Were I to become a man one day: I’d calcify into an apathetic voyeur, so protected by privilege as to be incapable of feeling. White person: my subjectivity was irrevocably distorted by my violent inheritance.”

Such emotional transparency is emblematic of their project. Not all memoirists reckon with themselves as severely and provocatively as Dunham does, particularly when it comes to the weight, responsibility, and, at times, unwanted consequences of a name. Their parents, Laurie Simmons and Carroll Dunham are well-known artists, and their sister, actress, writer, and director Lena Dunham, has appeared on the cover of Vogue, received two Golden Globes for her work on Girls, and is tailed by media eager to chronicle both her successes and very public missteps. The contrast to Dunham's own needs is drawn explicitly. “I wanted to be nameless, nothing, the opposite of known, and yet I had no idea how," Dunham explains in the book. "To aspire to be known was the only way I’d ever been taught to be alive.”

A few days before the gathering in Brooklyn, Dunham tells me about the journey of even putting an author on the book. "I wish [it] was just called A Year Without a Name and it was a blank cover. So I compromised," they say. "At the beginning of the book when I started writing I was using the name Grace and when I finished I was using the name Cyrus.” The memoir is thus credited to Cyrus Grace Dunham.

A Year Without a Name teaches us that gender identity and names are not as static as we might have thought. In fact, both are more like the process of self-discovery — slippery, complicated, ongoing. Over the course of their nameless year, Dunham moves between Grace, their given name at birth, and Cyrus, the name Dunham’s parents had chosen if they'd had a child assigned male at birth.

“How do I chronicle a year during which, for the most part, I was waiting? Waiting to correct my aberrated condition. How do I turn waiting, its fits and starts, into a narrative of self-realization? Much of how I spent the year was managing waiting with control.”

A Year Without A Name is serious and, at times, severe, but Dunham is thoughtful, warm, and often silly in person. “So writing this book sometimes, I was like, is this something Grace would do?” Dunham jokes when we speak. “At times I didn’t know what to do... writing a memoir made me feel dysphoric!” The delivery is tongue in cheek, but it's a topic Dunham confronts at length in her memoir.

“I hesitate to call the exhausting day-to-day of embodiment 'dysphoria,' that catchall for the pain of having a body that doesn’t align with one’s sense of self. What was a sense of self, after all: a delusion; mental illness. I struggled to believe my own discomfort. I just felt crazy.”

“A lot of the ways I experienced my gender dysphoria was feeling like Grace was this female character that I was watching navigate the world," they explain to me. "But I didn’t feel like Grace … it was like Being John Malkovich but with my own teenage body.”

Dunham is keen to thwart conventional “coming out” narratives. Instead of positioning transness as an arrival point or destination, it asks readers to understand gender identity and expression as a malleable, ever-evolving state:

“I was slow because the very idea of ‘transitioning’ – starting hormones, getting surgery, even just changing my name – sucked me into a thought circuit with no end and no exits: I need this. The fact that I need this means I’m weak. The fact that I’m weak means I don’t deserve this. I need this.”

Dunham also takes time to explore the process of writing a memoir, a genre which has typically been canonised by female writers.

“Taking my own life as subject matter makes me feel like a woman. There’s no theoretical praxis for this. It’s an emotion more than a belief. The most rigorous analysis I have is that everything in my life — who I am, what I do, what I don’t do — exists in an unbreakable duality with my sister. She, the woman, She, the writer. There are only two options to be her or reject her.”

At the conclusion of the book, and now, three years after beginning their transition, there is evidence that Dunham has perhaps pushed past this duality. Their thick eyebrows cinch together over their wire-rimmed glasses during our conversation as they explain that “it doesn’t make intuitive sense to a lot of people that looking like a man and being seen as a man by most of the world would allow me the space to be a lot more soft and open and vulnerable.”

But with the publication of A Year Without a Name, Dunham has emerged as a writer who is just that — soft and open and vulnerable — as well as incisive, humble, and sincere. A person not defined by external relationships or their famous family. Dunham's year of reclaiming chronicles a rare, hopeful type of devastation: the challenge of being asked to reconsider something you’ve readily, eternally accepted.

More like this
24 History-Making Black Women You Probably Didn't Learn About In School
By Ayana Lage and JR Thorpe
25 Inspiring Quotes From Black Women To Celebrate Black History Month
By Kyli Rodriguez-Cayro and JR Thorpe
"Lavender Haze" Star Laith Ashley Breaks Down Filming With Taylor Swift
By Jake Viswanath
8 Charities To Donate To During Black History Month
By Alexis Morillo
Get Even More From Bustle — Sign Up For The Newsletter
From hair trends to relationship advice, our daily newsletter has everything you need to sound like a person who’s on TikTok, even if you aren’t.