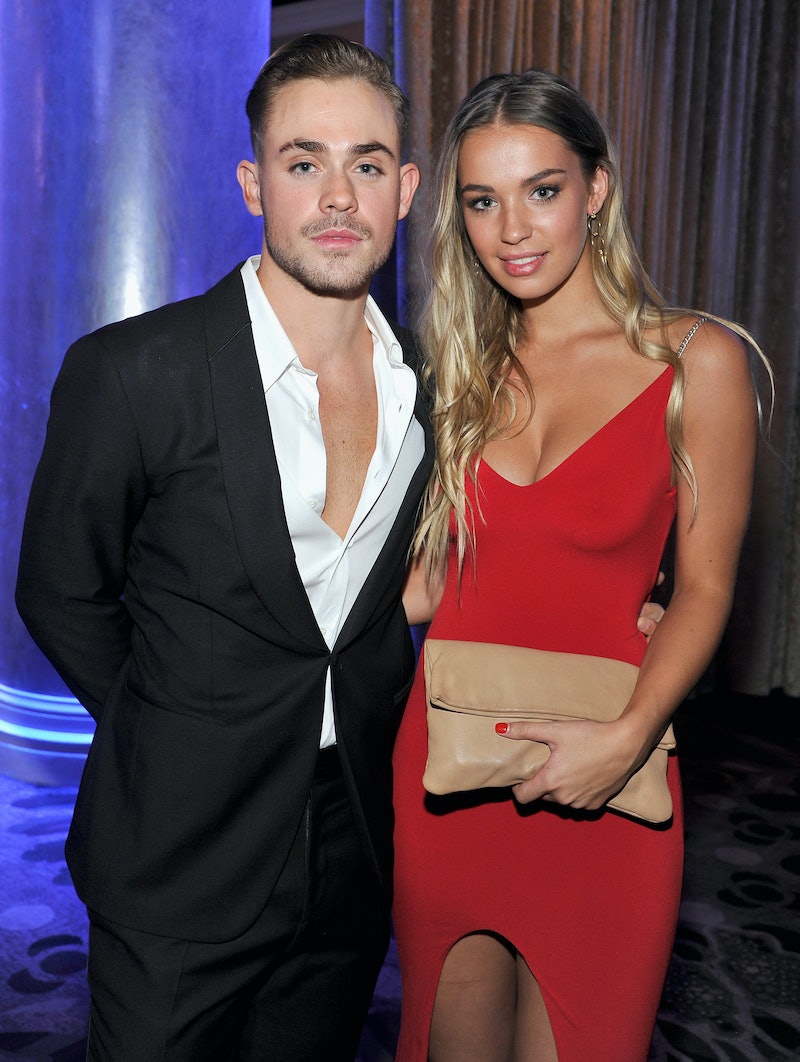 Dacre Montgomery may have found himself in a bit of trouble during Stranger Things Season 3, but offscreen, the star is doing more than fine and is enjoying his success with his girlfriend right by his side. And, like her boyfriend, Dacre Montgomery's girlfriend Liv Pollock has found a great deal of professional success in her chosen field.

Montgomery's girlfriend, who, like him, is a native of Perth, Australia, is not just a university student, but she's also a successful model. As detailed on her Instagram account, Pollock is a model with Vivien's Model Management, an Australian modeling agency. While you might catch the model posing for many beachside shots, she's recently made the transition from swimwear to other fashionable looks in which she's more covered up, as she told Perth Now in June. “It was a bit of a challenge, but in a good way,” Pollock said about the transition, and continued:

“It took me outside of my comfort zone. I do lots of swimwear shoots that are all about having fun and smiling, but this was the polar opposite. It was more refined and an incredible opportunity to show what I can do."

As for her day-to-day style, she's fond of whatever's the most comfortable, which is definitely relatable. “More often than not what I’ve got on is whatever is clean,” she also told the publication, “My wardrobe consists of lots of linen and denim as I feel these are the most comfortable and versatile fabrics."

Aside from modeling, Pollock also likes to help out with her grandmother's farm and, coincidentally, that job has some very specific ties back to her work in the fashion industry. In an interview with The West Australian from February, she described some of her work on the farm and said that it ranges from tagging, marking, drafting, and worming sheep for wool production. She explained,

"I was so proud of the environment my grandmother had created. It looked like a very well-oiled machine, coupled with loads of 70s music, farm dogs and beautiful wool."

She continued to say that if she got to wear a wool garment on the runway, then things would really come full circle for her, “It would be a really proud moment to wear a beautiful wool garment and know all the hard work that has gone into making it."

As previously mentioned, when she's not busy posing for the camera, or helping out as a farmhand, she's busy studying design as a student at Melbourne's Swinburne University. According to her interview with Perth Now, Montgomery, whom she has seemingly been dating since around March 2018, was largely the inspiration for her decision to pursue her degree.

“My boyfriend is a day-to-day inspiration for me,” she told the publication, “He works harder than any other human I’ve ever met, with passion pouring out of everything he does. I don’t want to put all of my eggs into one basket." Even though she's super busy, this program actually works perfectly with her schedule, as she also explained, “I’ve had some time to figure out what I want and this course gives me the flexibility to work, travel and study.”

Between her modeling career, her school work, and her travels (for work purposes and to visit the inspirational Stranger Things star in America), Pollock certainly has so many exciting things on her plate right now.

More like this
Here’s What Happens To Bill & Frank In 'The Last Of Us' Video Game
By Brad Witter
Grammys Host Trevor Noah Made Adele's Dream Of Meeting The Rock Come True
By Brad Witter
Pedro Pascal Barely Got Through The "Lisa From Temecula" 'SNL' Sketch
By Stephanie Topacio Long
Melanie Lynskey Plays A “Ruthless Leader” In 'The Last Of Us'
By Brad Witter
Get Even More From Bustle — Sign Up For The Newsletter
From hair trends to relationship advice, our daily newsletter has everything you need to sound like a person who’s on TikTok, even if you aren’t.