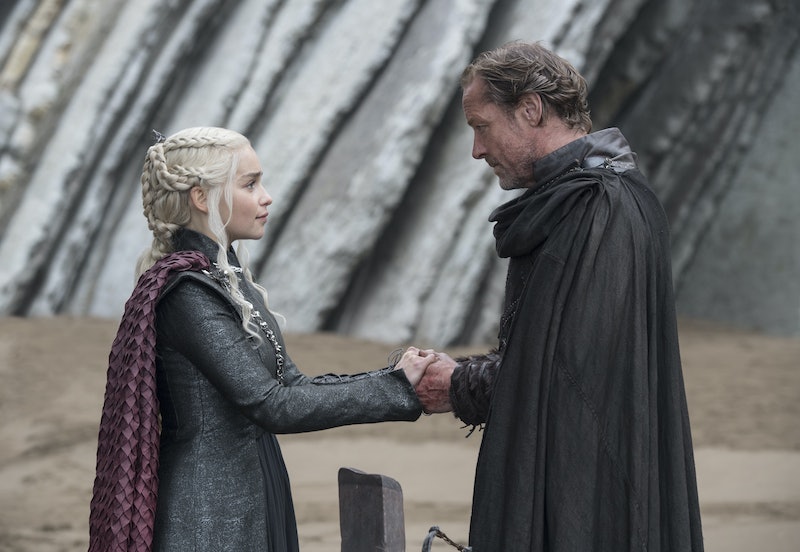 It's no secret that Ser Jorah Mormont has been harboring some very strong feelings for Daenerys Targaryen that extend far beyond that of a close friend and adviser. And while those feelings have never been reciprocated, there are some Game of Thrones fans out there that may be wondering if their recent reconciliation could form a possible love triangle between Jorah, Dany, and Jon Snow. However, Iain Glen recently spoke to Entertainment Weekly about what the future has in store for Daenerys and Jorah's relationship in Game of Thrones Season 8 and attempted to explain the "complicated" dynamic his character now finds himself to be apart of in these final few episodes.

"I don't know what people perceive, but in my mind, there was a significant shift when he lost her love and made this journey to try and win it back; once he won her favor again and was in her orbit," Glen, who plays Jorah on the series, told EW, referencing when Dany discovered Jorah had originally been sent to spy on her for Robert Baratheon before switching over to her side.

Prior to that revelation, Jorah may have been holding out hope that he would win the Mother of Dragons' love in the end, but now Glen feels that his on-screen counterpart has accepted that these deep, complex feelings he has for her will always be a one-way street. "Of course, there has always been a profound love there," he added. "But him wanting a reciprocal physical love has gone and he was just happy to be with her." In other words, file this relationship under the category of "it's complicated."

As for how Jorah views his fellow comrade in arms, Jon Snow, those feelings aren't as straightforward as you may think. On the one hand, Jorah is well aware of how close the King in the North is getting to his queen, which could cause some jealousy. However, Jon and Jorah bonded during their trip beyond the Wall. In fact, Jon even offered to give his sword Longclaw back to him, knowing that it had originally belonged to Jorah's father. Jorah declined the offer, but between that and fighting off the dead together, the two characters have definitely been through some stuff together, which complicates things.

"He believes in Jon Snow like a lot of people do and has gotten to know him in their travels together last season," Glen explained during the same interview. "He thinks he's a good match with Daenerys best interests in mind. It’s a complicated emotion, but I think he feels that they would be a good unification and he’s basically supportive."

That being said, Jon and Jorah aren't the only admirers of Dany these days. Tyrion also possibly carries a torch for Dany that could complicate things throughout the final season. That look that he gave upon seeing Jon enter Dany's chambers in the Season 7 finale definitely had a little bit of jealousy mixed in.

"It’s complicated," Peter Dinklage admitted during a previous interview with EW back in September 2018, adding:

"A lot of the time with Tyrion, it's professional and personal. Obviously, he has feelings for Daenerys. He loves her — or thinks he does. She’s awe-inspiring. He’s questioning that because he doesn’t have a good track record for falling in love. There’s jealousy wrapped up in there. And he loves Jon Snow, too. They’re the two people he has the most in common with, in a way — they’re both outsiders in their own families who have refused to follow the path their family has taken, and hopefully for the better. He’s wondering how smart of a move [Jon and Dany getting romantically involved is], because passion and politics don’t mix well. He knows the two of them getting together could be very dangerous."

Looks like winter and White Walkers may not be the only thing Dany has to worry about in Season 8. Let's just pray to the old gods and new that it all works out for the best.