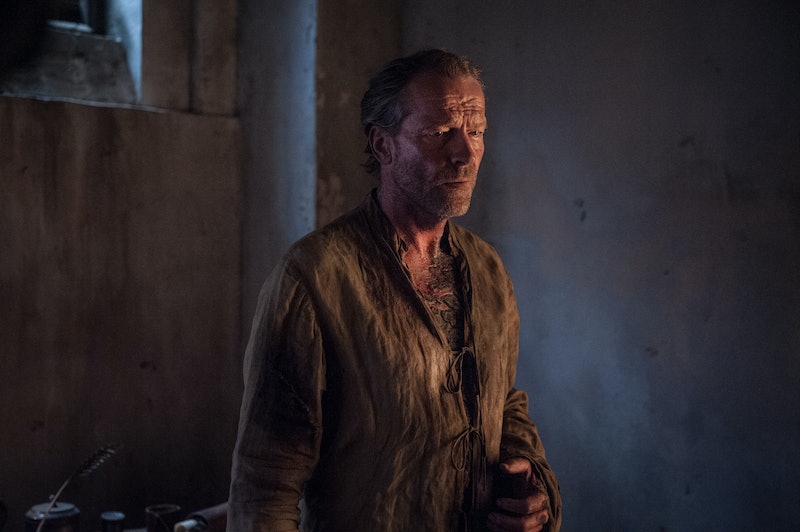 With months to go before the final season of Game of Thrones premieres, fans are desperate to learn of any detail they can about how this epic battle for the Iron Throne will come to a close. Iain Glen feels our pain, which is why he took pity on fans by providing a few Jorah spoilers for Game of Thrones Season 8 during a recent interview with Indiewire. And based on his remarks, it's possible a Daenerys victory could be in the cards now that the Mother of Dragons has her loyal knight back by her side, greyscale-free.

"I think he's very, very relieved and content to be back inside Daenerys' good favor," Glen teased to the outlet. "He's well placed to try and to look after her. Through all the seasons, he's ebbed and flowed with her, and now he’s well set, so that's where he is." Jorah has proven his love and devotion to his Khaleesi time and time again, so the fact that he's once again joined her ranks bodes well for her chances of claiming the Iron Throne as her own. After all, he is an experienced swordsmen who will do whatever it takes to see her victorious.

As to whether or not his unrequited love for her is ever reciprocated, that details has yet to be known — though given his history on the subject fans shouldn't hold their breath. Regardless, his loyalty is steadfast and true, making her odds of ruling Westeros increase even more. Let's just hope that his fealty doesn't also result in his ultimate demise. The poor man just survived having greyscale for crying out loud. Maybe he can take a little break on the suffering front.

Glen was limited on the amount of details is was able to divulge about the show's final season, however, he did address how thankful he is that the creators and HBO higher-ups trust the cast to see the episode scripts in their entirety, rather than limiting their knowledge for fear of spoilers coming out.

"Certain directors work that way… but I find it slightly belittling to what we do as actors, the notion that we’re denied large [parts of the script] unless it’s integral to the story that you’re telling," Glen said during the same interview. "The knowledge you gain about the story, the telling, and the themes that are involved … you piece your little journey into that. That’s what we do as actors. We should be given the material. We always got to read everything before we started."

So while the actor couldn't say how things will end for both Jorah and the rest of the Westeros characters, he did hint that fans will not be disappointed with what they see. "I was in awe at the writing finesse, that it just realized everything in a very fulfilled way," said Glen about the final season. "I thought it was brilliant, yet beautiful."

Odds are that fans will feel the exact same way and leave us all wishing that winter could've lasted just a little bit longer.