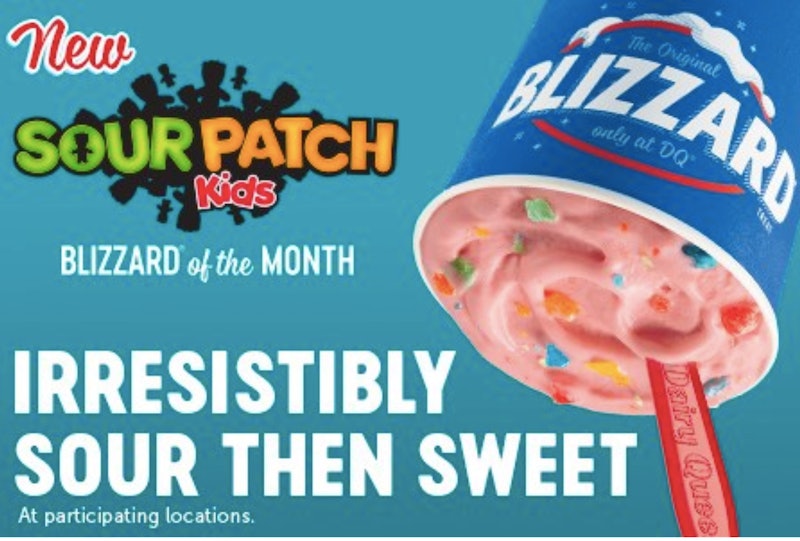 Eating ice cream with gummy bears in it is not for the faint of heart. The gummy bears get too hard to chew! There are Reddit threads about this! But even with the debates about gummies in ice cream raging on, Dairy Queen's July 2019 Blizzard of the Month is Sour Patch Kids. Have they figured out the right way to do gummies in ice cream or is this another hard to eat monstrosity?

Now, as you might have noticed, the Blizzard is filled with Sour Patch Kids Bitz, rather than whole Sour Patch Kids candies. This could potentially help with the "gummies too cold" issue. Also, Sour Patch Kids are softer than most gummy bears are, so they might remain more chewable. Still, there are already concerns. The Instagram account Candy Hunting, which reports on food news, posted about the Blizzard and one commenter responded, "Wouldnt the sour patch kid pieces get super hard??" We shall see, Instagram commenter. We shall see.

In addition to the Blizzard of the Month, Dairy Queen has six other limited time Blizzards at the moment: Oreo Cookie Jar has Oreo pieces, chocolate chip cookie pieces, and fudge. Brownie Dough has brownie dough, chocolate chunks, and cocoa fudge. Summer Berry Cheesecake has blackberries, raspberries, blueberries, and cheesecake pieces. Caramel Cannonball has caramel-coated caramel truffles, toffee pieces, and caramel topping. S'mores has marshmallow-filled chocolates and graham cracker pieces. Cotton Candy has cotton candy sprinkles. Unlike the Sour Patch Kids Blizzard, all of these Blizzards are made with vanilla soft serve, with the ice cream changing color and flavor based on what's blended into it.

Dairy Queen also recently announced a limited edition Zero Gravity Blizzard released in celebration of the 50th anniversary of the Moon landing. This Blizzard is meant to look like a galaxy and has blue swirls with star-shaped sprinkles. "Made with Oreo cookie pieces, sparkly cosmic swirls and sweet cotton candy topping blended with our world-famous soft serve and topped with colorful galaxy sprinkles," DQ described the treat. The chain first posted about this extra special Blizzard a week ago, so the "limited time" may have already run out at some locations.

If you want to try any of these Blizzards, now's the time. Someone had to test the consistency of those gummies.