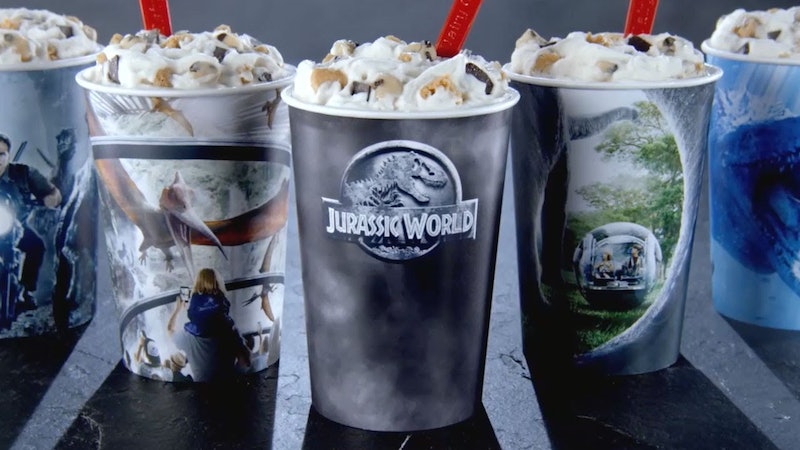 Summer is prime time for two things: ice cream and movies. The season when kids are out of school has long been a period when the year's biggest action films are released. This year's most-anticipated feature? Jurassic World: Fallen Kingdom, set to be released on June 22. Plus, if that in itself is not enough to look forward to, the movie appears to have sunk its teeth into the dessert world, inspiring the release of Jurassic Park-themed blizzards at Dairy Queen.

The concept of a summer blockbuster got its start in the mid-1970s with the release of Stephen Spielberg's Jaws. Ever since, moviegoers have been flocking to theaters for an adrenaline fix during the year's warmest months. Naturally, you'll need something to help you regain your chill after two hours of nonstop prehistoric action. One of the country's most iconic dessert chain understands this, and is here to satisfy your sweet tooth.

Last week Dairy Queen announced the forthcoming release of its Jurassic Chomp blizzard, in partnership with Jurassic World: Fallen Kingdom. The treat is sure to curb even the most monstrous sweet craving, as it features DQ's largest mix-in candy ever (a true feat when you consider the countless blizzard varieties that came before it). Colossal chocolate-dipped peanut butter bites are blended with fudge topping and folded into thick vanilla soft serve.

Fans of the franchise may notice the Jurassic Chomp resembles the Jurassic Smash Blizzard, which featured peanut butter cookies, chocolate chip cookie dough chunks, chocolate chips, and a peanut butter drizzle atop a base of vanilla soft serve. It graced menus after the release of the first Jurassic World flick back in 2015, and was served in limited edition dinosaur-themed cups. Maybe even prehistoric quadrupeds had a taste for peanut butter like their modern canine counterparts?

The new blizzard is a part of an expansive menu of vernal blizzard treats. The aptly-named Summer Blizzard Treat Menu introduces two additional new treats: the Summer Berry Cheesecake Blizzard and the Twix Blizzard. The former features a mix of fresh raspberries, blackberries and blueberries, plus chunks of real cheesecake, all blended with vanilla soft serve. The cheesecake reportedly provides an incomparable layer of decadence to the icy treat, and the berries give it a lavender hue. The Twix Blizzard closely resembles the candy bar, blending candy bar pieces and caramel sauce with vanilla soft serve.

To complete the Summer Blizzard Treat Menu lineup, DQ is reintroducing two old favorites: the S'mores Blizzard and the Cotton Candy blizzard. Marshmallow-filled chocolate chunks and graham cracker pieces are blended with vanilla soft serve to create an ice cream treat inspired by the campfire favorite for the S'mores Blizzard. Kids and kids-at-heart are sure to love the Cotton Candy Blizzard, which features pieces of cotton candy and rainbow sprinkled folded into vanilla soft serve.

Sound like a lot? Dairy Queen isn't done yet.

Not only are an additional two Americana-inspired treats are set for release later this summer, according to a press release, the chain is planning to open "experiential rooms" that bring the treats on the Summer Blizzard Treat Menu to life. Dairy Queen is partnering with famed interior designer and author Nate Berkus to create an immersive attraction in Manhattan, inspired by the seasonal menu. For two hours between 5PMand 7PM on Wednesday, May 23, fans can visit the S’mores Blizzard Treat room and the Cotton Candy Blizzard Treat Room at Big Screen Plaza.

Best of all? Employees of the exhibit will be collecting donations for Children's Miracle Network Hospitals. The chain has a long alliance with the organization; Miracle Treat Day, when $1 from each blizzard sold is donated to the nonprofit, takes place annually on July 27.

There's a lot to look forward to this upcoming summer. Dairy Queen, dessert, and dinos will undoubtedly make it all the more sweet.