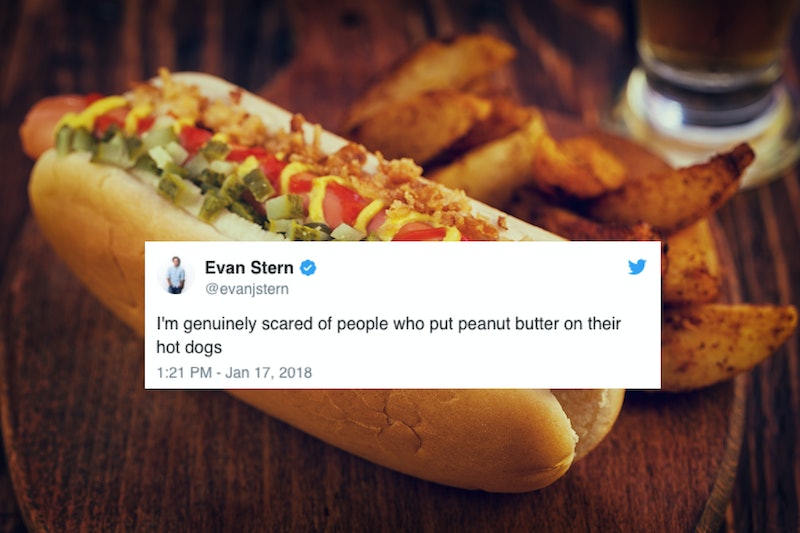 Food-wise, there are few things more straightforward than a hot dog. You grab yourself a hot dog — I'm never quite sure what's actually in a hot dog, and that's just fine with me — and pop it in a scrumptiously soft bun. You might add a drizzle of ketchup or mustard for a pop of flavor or color. If you're feeling really crazy, you might even add relish, hot sauce, or a heaping ladleful of chili. Even with these additions, it's still a relatively basic meal. It's a hot dog! If you thought you could never be shocked by a good ole frank, you're about to be unsettled, because people are putting peanut butter on their hot dogs and you need to see it to believe it.

Photos of PB-and-hot-dog sandwiches are circulating on social media and — naturally — people are freaking out. Whether the reactions are positive or negative, they're consistently, well, strong. I'm not seeing a lot of lukewarm or "live and let live" sentiments. Apparently, when it comes to barbecue food, people aren't interested in the "live and let live" idea.

Let's give this (weird, in my honest opinion) trend the benefit of the doubt and start by highlighting the people who've been enjoying it! Innocent until proven guilty, right?

A straightforward endorsement: "it's good." Short, to the point, and without gratuitous explanation. The addition of all caps does give it a little extra something, though. I'm buying it!

Ah, yes — a photo! Oddly, I'm not totally disgusted by the visual, although I am questioning the fact that ketchup and mayonnaise also seem to be in the mix. In any case, it appears the picture was uploaded in honor of last summer's National Hot Dog Day, so we must be dealing with a true hot dog fan here.

Maybe peanut butter on a hot dog isn't actually the breaking news that I thought it was. This Twitter user seems to have been raised on the combo. Clearly, her mom knew what was up.

I appreciate the way that this tweet actually explains in further detail why the combination works — and I totally buy this. Melted peanut butter could taste good on pretty much anything.

Why stop at just peanut butter? BB Classic Dogs in Bellevue, Nebraska also added some banana, bacon, and a fried egg to the mix. Apparently, it was so good that it earned the title of Dog of the Week!

When I was a kid, my parents used to push me to simply say "No, thank you. I don't care for any" if I was presented with something I didn't want to eat. Well, this is not that. This is a fairly violent reaction, but I'd say it gets the message across.

Again, this is extreme. Don't hate the player — hate the game.

This tweet takes a more apologetic, less in-your-face approach to sharing photographic evidence that this is, in fact, a thing.

Evan Stern launched a lot of conversation on Twitter about this food controversy — but I think fear seems like an irrational emotion.

People are, of course, also looking to the future of peanut butter on hot dogs (if it even has a future).

There's fear for pizza. I appreciate the advance planning, but let's not panic yet.

Already making plans for food dares! I like it.

Anyway, new year, new you, right? There's never a time as ripe for experimenting as right now. As the peanut butter fans would say ... go nuts.

More like this
On TikTok, Tinned Fish Date Night Is The Latest Viral Food Obsession
By Emma Carey
8 Completely Unserious Tips To Make Your Cuffing Season A Success
By Ginny Hogan
Why TikTok Is Flooded With Controversial Videos About "Pick Me Girls"
By Courtney Young
This TikTok Song About An Unrequited Romance Has FYPs In Shambles
By Emma Carey
Get Even More From Bustle — Sign Up For The Newsletter