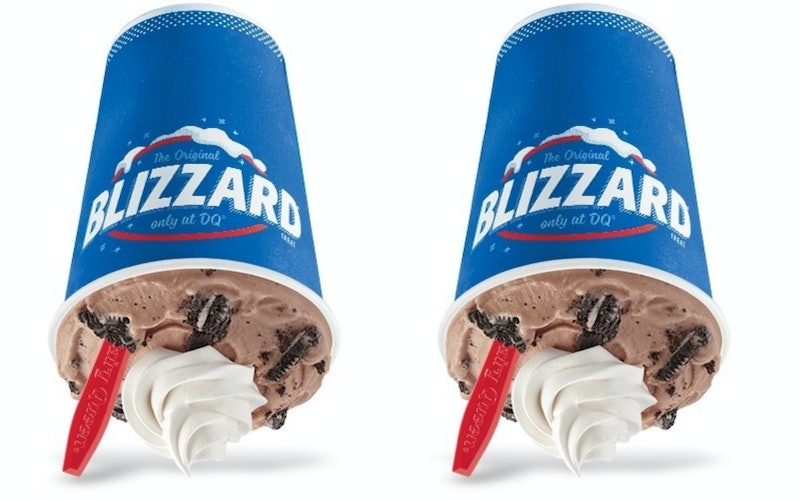 Americans love ice cream. Walk through most large supermarkets and you will find aisles devoted to the stuff with countless brands lining the shelves. But, a few short decades ago, the household brand names were challenge by what would become arguable the most recognizable ice cream dessert in the country: The Blizzard. The original blizzard came in 35 different flavors, many of which — like Oreo — are still available. But, for a limited time you can kick that classic up a notch with the seasonal Oreo Hot Cocoa Blizzard at Dairy Queen, which is the chain's Blizzard Of The Month during November 2018.

Per Dairy Queen, it features "Oreo cookie pieces and cocoa fudge blended with creamy DQ vanilla soft serve blended to Blizzard perfection and topped with whipped topping." It will be added to the existing holiday blizzard menu that includes the Pumpkin Pie Blizzard, the Dipped Strawberry made with Ghirardelli Blizzard, the Snickerdoodle Cookie Dough Blizzard, and Reese’s Outrageous Blizzard. Each of these blended treats is modeled after holiday favorites, and contain pumpkin pie pieces, chocolate and strawberries, snickerdoodle cookie dough, and Reese's pieces, cups, and caramel, respectively.

All five of the limited-edition flavors are available in mini, small, medium, or large sizes at participating Dairy Queen locations nationwide.

A New York Times article published in 1985 reported on the game-changing blizzard right after it was added to DQ menus. Then-CEO Harris Cooper called the confection "...the biggest thing that has happened to Dairy Queen in the last 25 years." At the time, International Dairy Queen Inc. predicted 175 million Blizzards would be sold in its 4,200 stores across the United States. Since then, the number of stores has increased to more then 4,500, with locations in more than 30 countries. Bizwomen reports the Blizzard currently accounts for more than one quarter of al of DQ's sales, with Oreo, Reese's, and Cookie Dough flavors topping the list of popular flavors.

Earlier this year, Dairy Queen decided to channel their Blizzard-making abilities into a way to celebrate the release of on of the year's hottest movies. In honor of the release of Jurassic World: Fallen Kingdom this past summer, DQ crafted a Blizzard treat fit to a Tyrannosaurus Rex. For the Jurassic Chomp Blizzard, DQ combined giant chocolate-dipped peanut butter bites with hot fudge sauce and thick vanilla soft serve. The resulting concoction was like a peanut butter cup blizzard taken to the extreme. Though it has since gone extinct, there is still an ample selection of Blizzards to get you through the winter season.

In aforementioned New York Times article, a Chicago-area chauffeur named Edward Weaver was quoted, describing the Blizzard as "...cookies, ice cream and chocolate, and it's all here in this cup." Blizzards have come a long way since their introduction more than 30 years ago. Now, in addition to the cookies, ice cream, and chocolate, you can order blizzards packed with candy and cookie dough and pie pieces. But, clearly the classics still prevail, as the Oreo Hot Cocoa Blizzard encompasses the classic favorite into one.

Find the Oreo Hot Cocoa Blizzard at Dairy Queen stores through the end of November.

More like this
12 Aphrodisiac Desserts To Spice Up Your Valentine’s Day
By Kaitlyn Wylde
15 Black-Owned Liquor & Wine Brands To Add To Your Bar Cart
By Alexis Morillo
16 Trader Joe's Appetizers That Are Total Party-Pleasers
By Kaitlyn Wylde
Learning To Love, Not Judge, The Lunchbox Wives Of TikTok
By Esther Zuckerman
Get Even More From Bustle — Sign Up For The Newsletter
From hair trends to relationship advice, our daily newsletter has everything you need to sound like a person who’s on TikTok, even if you aren’t.