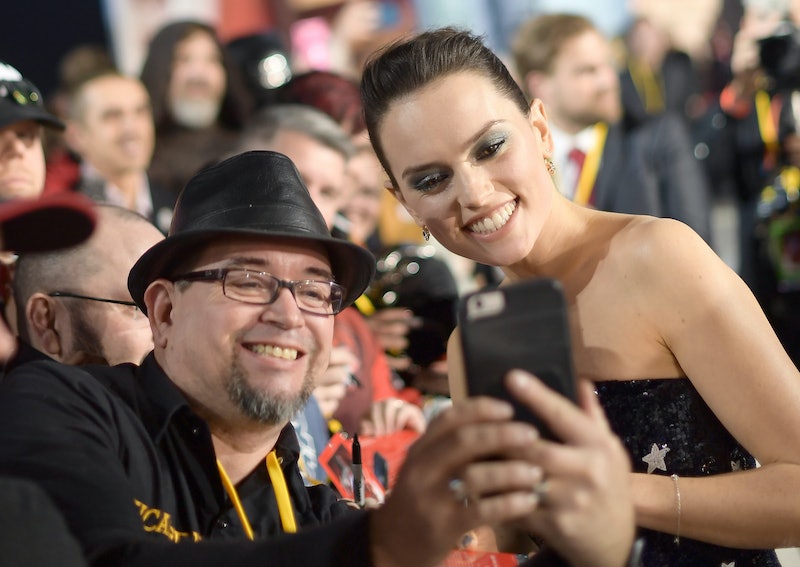 It can't always be easy being a Hollywood sensation. Being mobbed by fans at all times? Having your photo taken incessantly? Having your location exposed when you're spotted by paps? No thanks. And Star Wars actor Daisy Ridley says that she politely declines selfies with fans for these exact reasons. Sometimes it's better to decline a photo opportunity than risk your personal life becoming public, so it's no surprise Ridley takes these measures to keep her private life private.

In an interview with Radio Times, Ridley explains that, when she doesn't want to take a photo with a fan, she says "I'm really sorry — not today." She continued:

"Because I’m not a big photo taker, and I don’t want everyone to immediately know where I am. I know people share [their selfies] immediately, so I’m very aware of privacy in that way,' she added. With kids, they’re not going to put it up somewhere straightaway."

Ridley also mentioned how she sometimes skips social events in order to protect herself and her mental health, giving the example of a time she declined tickets to Cirque du Soleil. "I was like, 'Even though people aren’t going to look at me, if anyone does, I’m not in the right frame of mind to deal with that,'" she said. "So I didn’t go. It’s a shame, but sometimes you have to listen to what your body is telling you."

This isn't the first time that Ridley has spoken out about "selfie culture." Back in 2016, she asked fans to stop taking photos of her without her consent, saying in a social media post "For anyone sharing pictures of me that have been secretly taken without my consent… Not cool. It’s incredibly invasive, please don’t." Good for her.