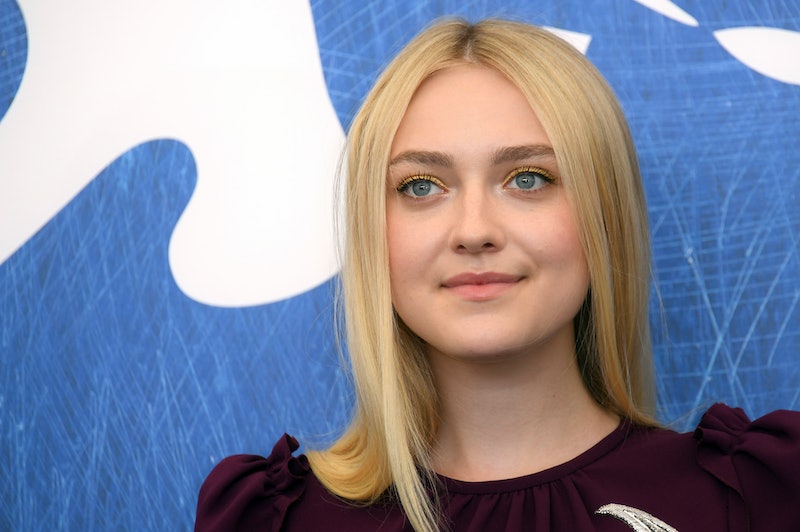 Dakota Fanning has one of the most recognisable faces in Hollywood. And considering we’ve now been looking at it for almost two decades, that’s hardly surprising. Fanning landed her first major gig at the age of seven, working alongside Sean Penn in I Am Sam in 2001. Since then, she has appeared in huge TV shows such as Friends, in the Tom Cruise classic War Of The Worlds, and in the Twilight saga as a terrifying Volturi vampire. But for her role in Rooster Teeth's gen:LOCK, this seasoned actress took a step behind the curtain, providing the voiceover for Miranda Worth — a character Dakota Fanning described as being "really, really badass."

Written by Rooster Teeth's head of animation, Gray Haddock, gen:LOCK is an animated series set in the year 2068, and it follows the story of one military force as they battle against the malevolent uprising of "the Union." With intense moments of love, loss, and anguish, the series at times feels like a high-end literary drama, rather than an animated show.

I chatted with Fanning about her experience working on the gen:LOCK set — including what it's like having to record 12 different kinds of grunt in a row — and how she feels being part of a cast of characters that NBC’s SYFY is calling “the next generation of sci-fi heroes.”

Rowena Henley: How did you first become involved with the gen:LOCK project?

Dakota Fanning: So I was approached by the guys at Rooster Teeth, and I knew that Michael [B. Jordan] was involved, and I was an admirer of his. So I read a couple of the scripts and we talked through the vision for the series and for my character Miranda and, yeah, I was super into it right away.

The great thing about recording voiceover and being part of animation is that you can kind of fit it into your life wherever you are in the world. You can be working on something else and then pop in to do a session. It doesn’t matter what you look like, you can just do a couple of hours here and there. It wasn’t super time consuming, so it was just a fun thing that I got to be a part of.

DF: So the story is set in a post-apocalyptic world, and my character Miranda is a pilot in a military unit that’s fighting the people who have decimated the world as we know it. Michael plays Chase, who is in a relationship with Miranda. And… well, I don’t know if I should spoil it… but Chase is presumed to be killed in an operation, and then he comes back in a new form, and that’s this gen:LOCK technology. And so my character Miranda is coming to terms with that, as are all the characters.

This show isn’t live action, it’s animation, but it's very realistic at the same time. That was the first question I had when I was going in for my initial voice session. I asked: “As far as the acting and the voice work, how naturalistic do you want it to be?” And they wanted it to be really natural, as if we were acting this out in a live-action way. So I think that the style of animation is very human, and I really responded to that way of working and responded to that style of animated series.

RH: Yes, I really loved the style of the show too. I’m not someone who typically watches animated series, but I found myself getting really into it.

DF: I know! I felt the same way! I’m not someone who watches a tonne of animation like this, but I really enjoyed watching this one and enjoyed working on it. And, during my first session, for example, they didn’t have a lot of the animation done, it was just kind of talking through what they imagined it would look like, but in the next one, they did have stuff animated, and it really started to come to life as we were recording, and that was really fun to see.

RH: How would you describe your character Miranda?

DF: She’s a really, really badass character. I liked her from the beginning. She’s completely equal to all the guys in her military base. She’s super tough and very strong but, at the same time, she’s dealing with a lot emotion in terms of thinking that her boyfriend is dead. You see her kind of move on and struggle with that, but then we see her dealing with his return and what that does to her psyche, her life, and her emotions. And Miranda and Chase kind of have to figure out what their relationship looks like now, and where the two of them are gonna go.

So we see a really tough, strong side of her but we also see a kind of softer, emotional side. And I like playing characters like that. And also, you know, it’s hard in animation to have quiet moments with the characters, but somehow in this series they found a way to have these big battle scenes but also these really vulnerable moments with just two of the characters. And they get the best out of both types of scene. And Miranda gets to have both of those kinds of moments, and I liked that. And I think that people gravitate towards her because she’s a relatable character; you do see her going through a lot of human stuff. I definitely could relate to her right away.

RH: And how did you portray that range of emotion just through voice?

DF: It’s an interesting thing to do. They wanted my voice to sound like what it would sound like if you could see my body. I mean, of course, there are all those little noises that you have to go through and record. You have a list of them. It’s so funny. Some of them you’re like: what is that? How do you do that? And there’s always an “open mouth” version and “closed mouth” version. So it’s stuff like “closed mouth surprised,” and “open mouth surprised.” If somebody walked into the room and had no concept of what was going on, they’d be very confused watching me “grunt: open mouth” 12 times in a row, and at all different kind of volumes.

As far as the dialogue goes, I just tried to imagine as if I was actually acting it out myself. But it’s also just a testament to the animators and to the guys who created it that they’re talented enough to be able to manipulate an image that’s computer-generated to be so realistic and so human. The subtle facial expressions and stuff like that was all them. So it’s probably more them than me!

RH: So, now that gen:LOCK is over, are there any other projects you have coming up? Any other animated series?

DF: All the things for now are live action, but I’d love to do more gen:LOCK some more. I’ve signed up to do another season of The Alienist. There’s another book, so we’re doing that. And also The Angel Of Darkness, so I’m going to do that. And then I’m also in Quentin Tarrantino’s new film Once Upon A Time In Hollywood, and that’s coming out this year! So I’m really excited about that.

gen:LOCK is available to watch now on the Rooster Teeth website.

More like this
'Blue Story' Fans Will Recognise 'The Confessions Of Frannie Langton’s Karla-Simone Spence
By Maxine Harrison
Owen Warner's Net Worth Might Surprise 'I'm A Celeb' Fans
By Sam Ramsden
Our First Look At 'Vardy V Rooney: A Courtroom Drama' Doesn’t Disappoint
By Bustle UK
Idris Elba "Breaks Out" Of London In 'Luther' Film First Look
By Sam Ramsden
Get The Very Best Of Bustle/UK