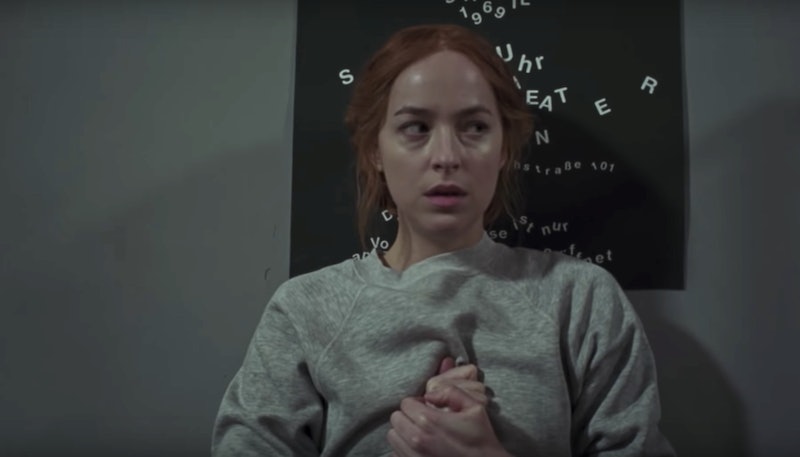 It's hard to say what makes Dakota Johnson's new Suspiria trailer so terrifying, exactly. There are no words spoken, and most of the clips are just quick flashes of a single person or object. Perhaps it's the music — OK, the music definitely has something to do with it — but the whole thing is extremely unsettling. Fair warning.

The new Suspiria is actually a remake of the 1977 Italian horror classic of the same name, and it revolves around an American dance student (Johnson's Susie Bannion) who transfers to a prestigious dance academy in Europe — Center Stage this is not, though. It's definitely got some serious Black Swan vibes, but like, multiply that level of psychological terror times one thousand.

The trailer opens up with a red-headed Johnson clutching her chest and looking as if she's just seen a ghost. Or like, she's trying to calm herself down after being on the verge of a super intense panic attack. Either way, she's scared. Really scared. The next clip shows Tilda Swinton — who stars as Madame Blanc, the dance company's artistic director — standing outside and staring blankly into the distance while smoking a cigarette. She also looks pretty scared, TBH.

The sequence of clips that follow are brief glimpses into whatever the hell is going on at this creepy academy, and include Johnson dancing, a bunch of intense-looking older women standing around in a dark office, a strangely-shaped flickering light projected against a wall, and Johnson panting heavily as she sleeps, seemingly in the midst of a nightmare.

Then there are some galloping horses, a close-up onto someone's blue-tinged lips, and a few pages from a journal with a bunch of "Mother" names — nuns? — scribbled in all caps, an indiscernible polaroid picture, and a drawing of a rifle against a star with the word "RAF" underneath. Confused? Same. But, it gets scarier.

Viewers next get the sense that part of the plot includes a missing girl, and there's a clip that shows a single white sheet with what appears to be a blood-soaked outline of a body. Cringe. From there on out, the tension builds, things get increasingly creepy, and while it's still not totally clear exactly what's going on, it's hard to keep your heart from racing.

"A darkness swirls at the center of a world-renowned dance company, one that will engulf the troupe's artistic director, an ambitious young dancer, and a grieving psychotherapist," Amazon Studios wrote of the film's plot. "Some will succumb to the nightmare. Others will finally wake up."

In addition to Johnson and Swinton, the Suspiria remake also stars Mia Goth, Chloë Grace Moretz, and Jessica Harper, who played Johnson's Susie Bannion in the original film. Italian horror director Dario Argento was at the helm of the original film, and the new iteration was directed by Call Me By Your Name's Luca Guadagnino.

Of Guadagnino's remake, Harper wrote on her Facebook page (via BloodyDisgusting), "I have seen this movie – the most brilliantly scary film I have ever seen. Luca’s Call Me By Your Name does not prepare you for it, but throws into relief the director’s brilliance and versatility."

So, yeah. If the star of the original film thinks that the remake is "the most brilliantly scary film" she's ever seen — even though she knows what happens, how it all goes down, and what all of the characters' fates will be at the end —  it sounds like viewers should probably brace themselves for this one. Think you can handle it? Suspiria hits theaters on Nov. 2.