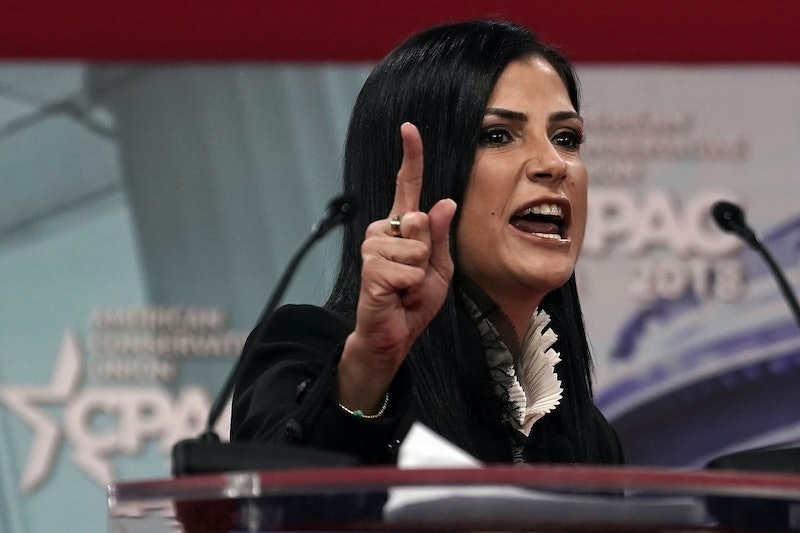 The recent mass shooting at a Parkland, Florida, school has brought the gun control debate back into focus. That means we're seeing a lot of familiar faces in addition to the fresh faces of the teen shooting survivors now leading the charge for gun reform. One of those old hats is conservative firebrand and NRA spokeswoman Dana Loesch; but even if you recognize her, there might be something about her past that surprises you. A look into Loesch's past political views shows that the NRA spokeswoman didn't always fall on the same side of the political spectrum that she does now.

In the 1990s, she did campaign work and opposition research for Bill Clinton and was an active member of the College Democrats chapter of Webster University while she was a student there. However, Loesch claims that her views started to change after Clinton's extramarital affair with intern Monica Lewinsky came to light, and then over the next couple of years, she gradually became more and more conservative. The real tipping point — and the point of no return for Loesch's former, liberal self — was Sept. 11, but she told View host Jenny McCarthy that by that point she had already realized that she didn't share as many liberal, progressive views as she'd thought.

"Well, big government is one of them, fiscal responsibility. Like, I started realizing the importance of people should be good stewards to their fellow man," Loesch told McCarthy, describing the values on which she, in her mind, had begun to differ with liberals. "Really, big government ... it's the problem of what happens when people just forget they should be kind and they should help people and they should voluntarily do it."

Another huge shift in her life that she believes caused her change in political beliefs was becoming a mother, coupled with her desire to protect herself and her family. This also helps explain why she's such a fit in the position where she is now, as spokesperson for the NRA.

"I've been told I'm a whore for the N.R.A. I'm a prostitute for the N.R.A. I believe so strongly in the natural right to bear arms," she told The New York Times. "I feel so passionately about that."

That wasn't her first job upon joining the ranks of America's conservative pundit class, however. She worked her way up, first joining the Tea Party movement and then eventually working first with Andrew Breitbart and then later with Glenn Beck at The Blaze.

Loesch also regularly appeared on CNN at one point, although she came under fire when she said that she didn't see anything wrong with U.S. marines urinating on Taliban corpses. After becoming the national spokesperson of the NRA in February 2017, she's become very popular on the right — while attracting more and more negative attention from the left.

She starred in an NRA recruitment ad released in April 2017. In that ad, she spoke in very divisive terms and used rhetoric that many saw as promoting violence against those resisting President Trump and his administration's actions. "The only way we stop this, the only way we save our country and our freedom is to fight this violence of lies with the clenched fist of truth," Loesch says at the conclusion of the ad.

Whether you agree with her positions or not, Loesch has proven to be a respectful and willing debater, as evidenced by her conversation with Never Again MSD activist Emma Gonzalez. But the extreme nature of some views that she's expressed, like those in the NRA recruitment ad, make it all the more surprising that she says her political beliefs fell left of center once upon a time.