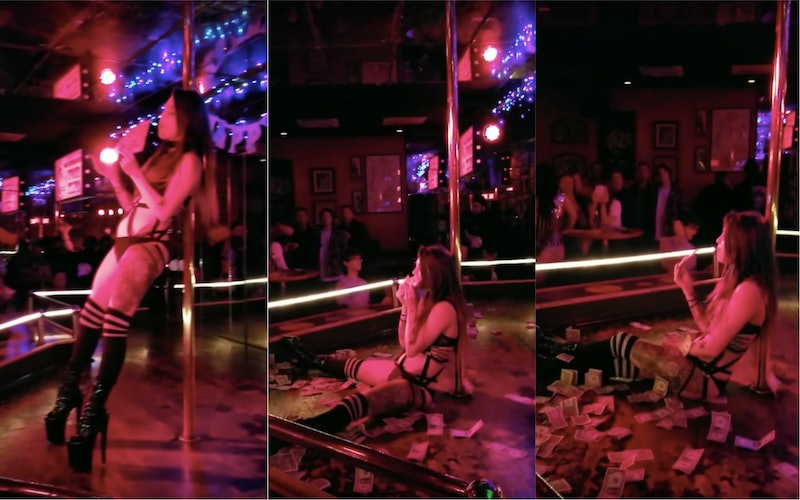 I need to make it clear that up until now, as a New Yorker, my one and only true pizza god I have deigned to acknowledge is Pizza Rat. He represents my brand not just physically, but emotionally and spiritually as well. Today, though, I make room in my heart for another authority on pizza: this woman who stopped dancing at a club to eat a slice of pizza, and has since gone viral for becoming the hero the collective internet deserves.

The woman in question here is Lilly Moon, a dancer, model, and artist who was performing a dance to Metallica’s Enter Sandman at Jumbo’s Clown Room in East Hollywood, according to Eater LA (who would, of course, have the scoop on viral pizza consumption in their area). The video — which has racked up an impressive 80,000 retweets and 228,000 likes since it was posted on April 15 — shows Moon performing a pole dancing set in a burlesque outfit, owning her thing, and having wads of cash tossed at her, all while multitasking with a slice of what might just be the most delicious piece of pizza my eyes have ever beheld. The truly iconic moment of this video, though, is about ten seconds in, when she slides down the pole and sits to enjoy her slice, in a performance so nuanced and inspired that people started throwing even more cash at her.

You may not be able to have your cake and eat it too, folks, but when it comes to pizza, clearly that same rule does not apply.

After it started making the viral rounds, Moon uploaded the full video of the dance on YouTube, which gives even more insight into this genius pizza maneuver. She takes her sweet, sweet time enjoying the slice before passing it off to a patron, and then embarking in dance moves most of us would not be able to do after years worth of practicing, let alone on a stomach full of delicious cheesy goodness.

Twitter is, obviously, living for this. The wide array of pizza-related GIFs people sent in response to this are, in fact, a true testament to both our love of pizza, and to the world of untapped possibilities Moon just proved we have yet to pioneer on the pizza horizon.

Moon has become such an icon that she might have a bunch of mini Moons following the trend in her wake.

In fact, so intense is the internet's love of this routine, that Moon has even inspired her own fan art.

For the record, Moon approves.

Of course, so far we have neglected to address the most important question in this sexy dairy-laden jamboree: where did the pizza come from? As a connoisseur of chain pizzas, my eyes (and my stomach) tell me that it's not Pizza Hut, Papa John's, or Domino's, three companies whose work I am embarrassingly familiar with. And my suspicions were confirmed: Moon posted a tweet on April 16 indicating that the pizza was from Garage Pizza, a pizza joint close to Jumbo's Clown Room. In fact, she didn't even order it. The fact that this was all glorious pizza improvisation makes this all the more delicious, TBH.

Anyway, moment of silence for Pizza Rat, who was just dethroned as the most beloved pizza icon on the internet. (Although seeing as Brooklyn 99 definitely held a funeral for him last year, he probs is too busy eating pizza on that big, cheesy cloud in the sky to notice.) In the meantime, may we all be inspired by Lilly Moon and her foolproof approach to life: rock at the thing you do, and then add pizza.