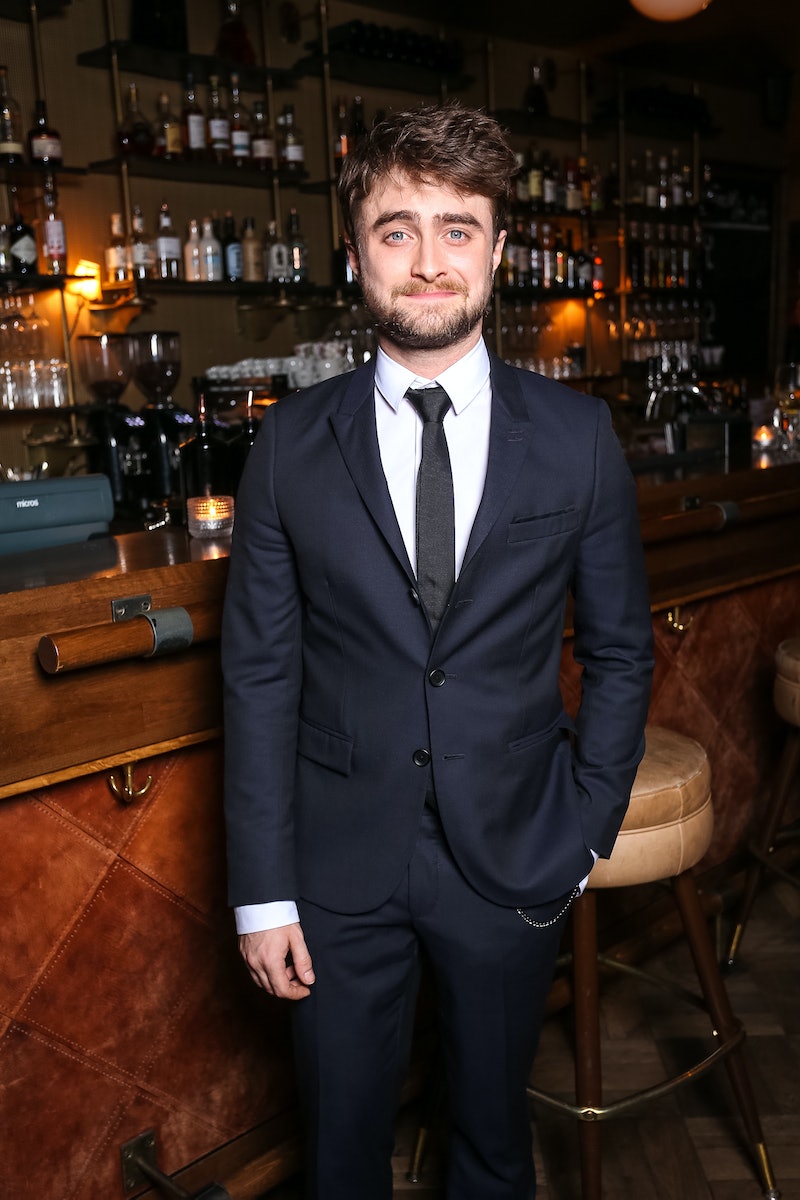 On the Feb. 1 episode of Good Morning America, Daniel Radcliffe revealed that he's a proud fan of The Bachelor and he's not afraid to admit it. During his appearance, a fan asked Radcliffe what his current pop culture obsession is, to which he replied, "The Bachelor I'm doing a lot of." Yes, it turns out that the "Boy Who Lived" is really just like us: a Bach fan. The Harry Potter alum, who was on GMA to promote his new comedy TV series Miracle Workers, went on to share his unapologetic love for the franchise, saying:

"I say this to people and they seem surprised. I would also like to say I used to be like one of those guys who was like, 'Yeah, my girlfriends makes me watch it.' It's not. I'm making the choice. It's me week after week."

If his whole admission just makes you love him even more, well, you're definitely not alone. Who wouldn't want to watch The Bachelor with Harry Potter?

But the actor did admit that he wasn't always so keen on the series, the actor explained, "I think I used to be like really annoying and snobby about it and then I actually started watching it and I'm like, 'Ahhh I like this. It's fine.'"

And Radcliffe isn't only a fan of the show, he's a fan of the man currently looking for the one. Speaking on Good Morning America, he was quick to share his specific admiration for this year's bachelor Colton Underwood. "I'm very obsessed. Particularly with this season. Also, he seems like a nice person this season. They haven't all been."

The outcome of Underwood's time in the Bach mansion, which is still currently airing on ABC, remains unknown, but the former football player recently hinted that he might have found the one. During the Feb. 1 episode of The Ellen DeGeneres Show, Underwood wouldn't say if he's engaged, but did reveal, "I can say I'm definitely the happiest I've been in my life. I wouldn't have gone on the show if I didn't think it was going to be good," according to E! News. So it seems that there may be some good news on the horizon for Radcliffe and other fans of the long-standing dating show.

Although it may have come as a bit of a surprise, Radcliffe's admission is extremely refreshing given that many celebs often try to keep their personal lives under wraps — particularly when it comes to guilty pleasures such as watching reality TV.

And his Bachelor fandom places him in the company of a few others star who have opened up about their love for Bachelor Nation. Dakota Fanning shared her feelings with W magazine in July 2018, telling the publication, "Yes! I'm obsessed with The Bachelor and The Bachelorette." David Duchovny also revealed his admiration for the show, telling Jimmy Kimmel early last year that he watches the franchise as a way to bond with his daughter. Big Bang Theory actor Kaley Cuoco has certainly not been shy about her obsession, which runs so deep that she's had clothes custom made and often hosts Bachelor viewing parties at her home, according to PopSugar. And Fargo star Kirsten Dunst has also expressed her love for the show, telling Entertainment Weekly in 2011, "My girlfriends got me a T-shirt that says ‘Most. Exciting. Rose Ceremony. Ever.'"

Radcliffe's recent admission proves that, as one of the most popular reality shows on television, The Bachelor continues to be one of the world's greatest obsessions. It's so popular, it's officially crossed over into the Wizarding World!