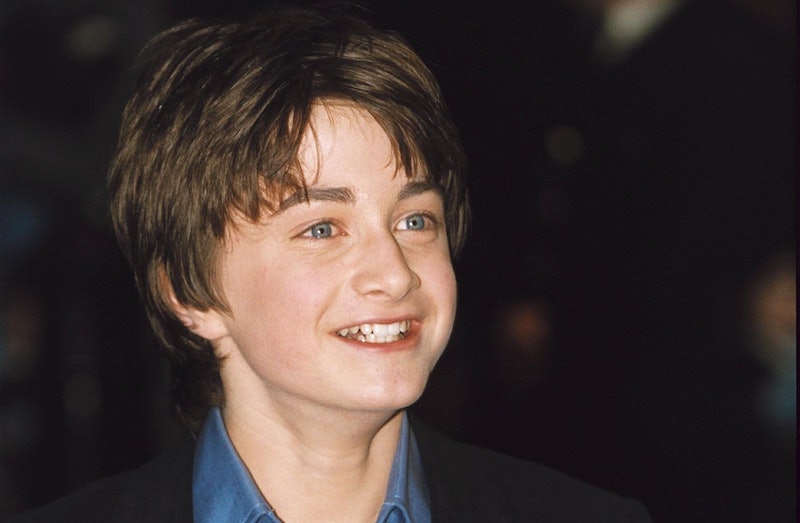 Potterheads, you've missed a trick: Daniel Radcliffe's first Harry Potter autograph just went up for auction, as Metro reports, and a mystery buyer secured it for £2,600. The autograph, appropriately, was in the front page of a hardback copy of Harry Potter and the Philosopher's Stone, alongside penmanship from Emma Watson, Rupert Grint, Tom Felton, Robbie Coltrane, and Chris Columbus, director of the first two Harry Potter films. Perhaps celebrity culture has warped my valuation skills, but knowing the devotion (and infinite financial resources) of some Potterheads...£2,600 doesn't seem all that much?

Here's the story behind the autograph: according to Metro, owner Verity Collins was an extra in Harry Potter and the Philosopher's Stone as it filmed in Goathland, North Yorkshire in 2000. Shrewdly, Collins collected autographs from the cast in her copy of the book — and when she asked for Radcliffe's on the first day of shooting, the then 11-year-old actor (sitting in a marquee by himself, apparently) told her it was the first time he'd ever been asked. Ah, the innocence! Perhaps he still thinks of that moment today, as he signs a fan's arm with a Sharpie for the eight millionth time.

The book then went up for auction on June 26, valued by auctioneers Vectis at about £500. And, as you're already aware, the signed copy far outstripped that valuation. Kathy Taylor, from the auction house, told Metro, "It's such a lovely story. It's always difficult to gauge the price when something is unique."

Let's recap the latest Daniel Radcliffe updates while we're here, shall we? On June 13, the news broke that Radcliffe had joined the cast of the Unbreakable Kimmy Schmidt interactive special, Netflix's first interactive comedy special (Black Mirror's "Bandersnatch" and an episode of survival show You Vs. Wild pipped Kimmy to the interactive post).

No news yet on Daniel Radcliffe's role, though it seems reasonable to assume it could be Potter-related, considering Kimmy became a best-selling children's book author by the show's finale. Here's what the press release teased: "In the Unbreakable Kimmy Schmidt interactive special, Kimmy Schmidt (Ellie Kemper) sets off on her biggest adventure yet. Three states! Explosions! A dancing hamburger!" it read. "And you, the viewer, get to decide how the story goes."

And another TV appearance for Radcliffe: he'll be unearthing his family history in the BBC One genealogy show Who Do You Think You Are? this summer. The actor will "uncover his ancestor’s extraordinary and moving letters from World War One," according to a press release. Other celebrity participants include Kate Winslet, Naomie Harris, Sharon Osbourne, Katherine Ryan, Jack Whitehall, Paul Merton, and Mark Wright.

Colette Flight, executive producer of production company Wall to Wall, said in a press release, "We’re delighted to have this incredible line-up of stars and to have captured these journeys of discovery as they explore their extraordinary family trees. What they uncover is revelatory, moving, often funny and always fascinating. Many of our celebrities’ ancestors were caught up in momentous historical events which we are covering for the first time in the series." Consider me intrigued, Radcliffe.