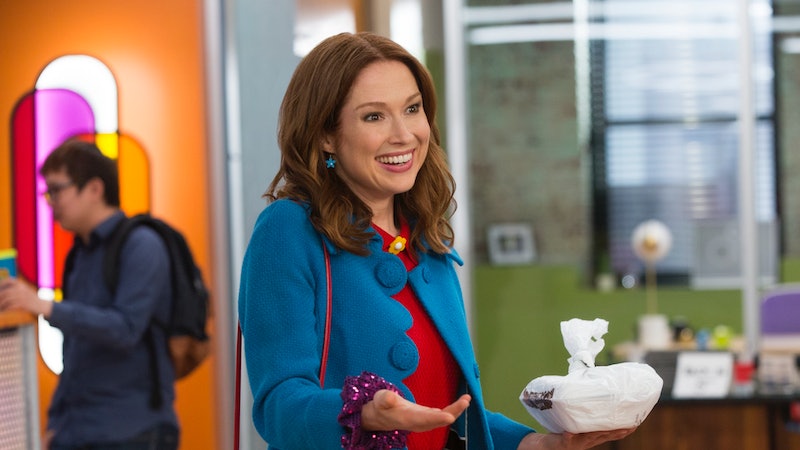 While the press release obtained by Bustle didn't drop any hints about what role Radcliffe will play in the special, it did tease the return of the infamous Rev. Richard Wayne Gary Wayne (Jon Hamm) and plenty of the wacky hijinks the show has become known for. "In the Unbreakable Kimmy Schmidt interactive special, Kimmy Schmidt (Ellie Kemper) sets off on her biggest adventure yet. Three states! Explosions! A dancing hamburger!" the description began. "And you, the viewer, get to decide how the story goes."

The description also doesn't let fans know, when, exactly, the interactive special takes place in the Kimmy Schmidt universe, as the Season 4 finale jumped four years into the future, to establish Kimmy as a successful children's book author whose stories were turned into a Harry Potter-esque theme park. (Perhaps Radcliffe stars in the big screen adaptations of K.C. Schmidt's books?) Instead, Netflix proposes that viewers can "foil the Reverend’s (Jon Hamm) evil plan and get Kimmy to her wedding on time" or "accidentally start a war against the robots," based on their choices while watching the show.

The Unbreakable Kimmy Schmidt will be Netflix's first interactive comedy — the streaming service has previously launched an interactive episode of Black Mirror as well as the survival show You Vs. Wild — and while it isn't quite the movie that fans had been asking about as the show's final season hit Netflix, it does promise to be filled with even more jokes, visual gags and wonderfully weird characters than ever before.

Back in January, however, the show's creators Tina Fey and Robert Carlock revealed to The Hollywood Reporter that they were considering making a Kimmy Schmidt movie, and Kemper teased that there was more of Kimmy's story left to tell. "I know we might go on to be doing a movie and I hope that that happens — I know it's not definite," she said at the time.

In the same article, Tituss Burgess — who plays everyone's favorite overly-dramatic aspiring actor, Titus Andromedon — said that the only reason he would sign on to another installment of Kimmy Schmidt is if there was a "juicy" idea at its center. "I trust [Fey and Carlock] implicitly, so I can't imagine that they would have Titus be a departure from what we know and love," he said.

"But also we would have to find these characters in a far different place emotionally and in circumstances to warrant a movie. Otherwise, it should just be another TV show," he explained. "If they think a movie is the way to go, that just means that they have something really juicy cooking."

No matter what the plot of the interactive special ends up being, it seems clear based on the few details revealed by Netflix that the next installment of Unbreakable Kimmy Schmidt will be even stranger and more magical than any of its previous story. It's a miracle, indeed.