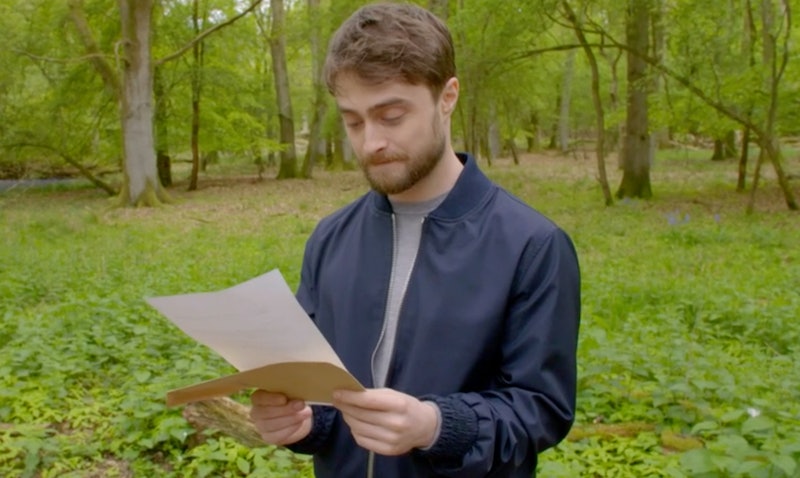 The new season of Who Do You Think You Are is back on our screens and not disappointing. Who ever would have thought that a programme centred around celebrities digging through their family histories would have been such a hit? Erm everyone. And the star of season 16's first episode is Daniel Radcliffe, who came through with the goods with his interesting family history. Seriously, Daniel Radcliffe's Who Do You Think You Are was an absolute treat.

Radcliffe's parents are former actors who became a casting agent and a literary agent, respectively. However, during the show, Radcliffe learned about a tragic event that occurred in his mother's side of the family.

After meeting a distant relative on his mother's side, the actor found out he looks crazy similar to his great great grandfather Louis Gershon, who was married to his great great grandma Jessie Greenwell in South Africa. The Harry Potter star learned that his great great grandfather was working in the diamond industry in Kimberly South Africa at the time. An industry that he brought back with him to the UK and opened a business in London's famous diamond district, Hatton Garden. Radcliffe spoke to an expert Hatton Garden historian who showed him documents from the past, meaning Radcliffe could learn the methods his family used to set and mount diamonds.

The next generation of Radcliffe's family consisted of his great grandfather Samuel Gershon, who married Raie Jacobs and in South End On Sea. Samuel and his brother took over Louis' jewellery shop in Hatton Garden, which was sadly ransacked in an alleged robbery.

Radcliffe was keen to learn more about the robbery. He met a criminologist who helped him delve into the history and what happened to the Gershon Brothers. During the theft, the equivalent of £250,000 in today's money was stolen. As there was no evidence of a break in, the police believed that the crime was an inside job, despite having little to back this up apart from suspicions that were raised by the fact that the Gershon brothers had made claims three times in a 15 year period. It is believed that antisemitism played a role in the case, as the Gershon brothers were Jewish. Sadly, antisemitism was on the rise in Europe at the time of the robbery.

As a result of the robbery, Samuel tragically decided to take his own life. Reading about his great grandfather's sad decision to take his own life in the face of bankruptcy, Radcliffe became incredibly emotional, especially when reading the letter Samuel left for his wife.

Radcliffe also learnt about the scandal that the family experienced after his great grandfather's death in a time when death by suicide was such a taboo thing. It's revealed that just three weeks after her husband's death, Raie chose to change her name from Gershon to Gresham.

Radcliffe's father's family are of Northern Irish origin. During his time on the set of My Boy Jack, the actor kept a photo of his great great uncle Ernie with him to remember WWII. His great granny Flo had four brothers who all served in WWI. He was lucky enough to see letters that had been sent to and from Ernie during his time in the war. The heartbreaking letters are a very sweet insight into a young man's time at war. Letters from his sweetheart Genie are especially cute.

Sadly, their romance becomes a very tragic one when we learn that Ernie didn't make it home from the war. A letter sent to his great great grandmother from a friend who witnessed his death revealed that a shell fell on their dugout and killed those inside instantly. However, despite this tragedy, the show ends on a relatively happily note, revealing that Genie and Ernie managed to marry before his death. Their wedding took place on Valentine's day in 1915 when Ernie was home on leave.

Despite all of the ups and downs experienced by both sides of his family, Radcliffe remains positive about his family, which was always filled with love. During the show, he said:

"Just to find out how much love there is in my family. You know a lot of very sad things have happened to various parts of my family. But i can't be sad about it because everyone was really loved and that means that ultimately the time that they had on this earth, even if it ended prematurely and sadly was, you know, worth having."

You can catch up on Daniel Radcliffe's episode of Who Do You Think You Are on iPlayer.