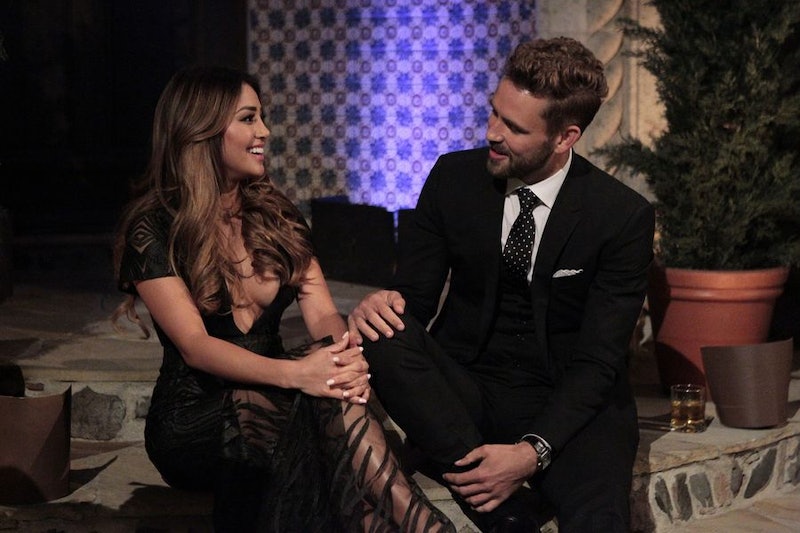 It’s pretty early on Nick’s season of The Bachelor, so it’s hard to pick out what woman could eventually wins heart. First, Rachel got the first impression rose, but then Corinne seemed like she was racing up to the top, and now, there’s a new woman in town. Danielle L. won The Bachelor's Backstreet Boys date and got Nick’s group date rose following it. Is Danielle the new frontrunner on The Bachelor?

Even though Danielle is not a professional dancer (that’s Jasmine), she strutted her stuff on the Backstreet Boys stage so well that the Backstreet Boys themselves awarded her a special serenade of “I Want It That Way” with Nick on stage. It was cute, and they kissed a lot. Then, after the “Everybody (Backstreet’s Back)” dance was performed and the group went home, Nick gave Danielle the group date rose because he was really feeling their conversation and felt a spark with her. This, of course, did not please Corinne, who thinks she is the only frontrunner and was insanely jealous of Danielle’s dancing prowess and kissing with Nick. Danielle is on the way up, it seems, and everyone else (except for maybe Vanessa) is on the way down.

I like Danielle — I think she’s beautiful and approachable, and she’s not starving for attention like some of the other women on The Bachelor. I’m not sure about Danielle’s past and what else she’s bringing to the table, but it seems like she and Nick would make a good match. Will she make it to the end? It’s too soon to tell, but after tonight I think Danielle has a fighting chance on The Bachelor.