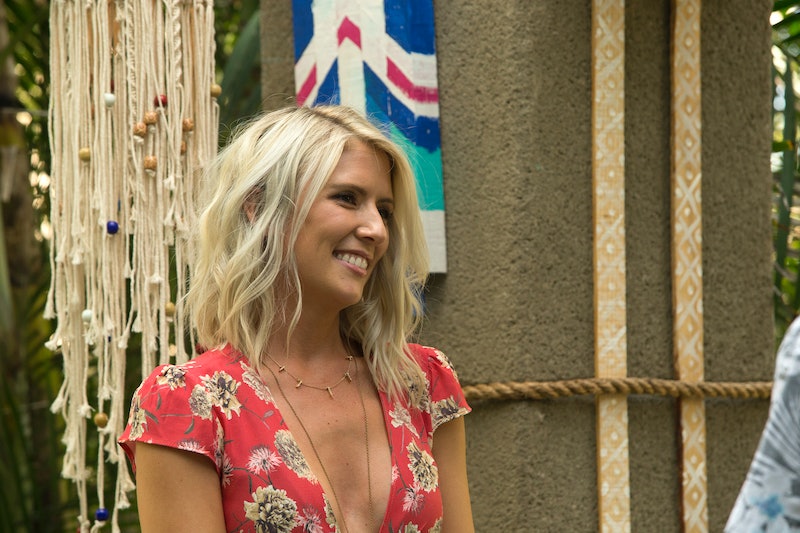 Danielle Maltby captured viewers hearts with her kind spirit when she first appeared on The Bachelor in 2017. Afterwards, she found love outside the Bachelor franchise, but also unfortunately went through a subsequent, heartbreaking split. Now, Bachelor Nation's Danielle posted an emotional Instagram message about how she's feeling after her breakup with Big Brother's Paulie Calafiore, per Us Weekly. And the reality star wasn't afraid to open up and share exactly how she's handling the whole situation.

Danielle first wrote, on Dec. 19, that she was feeling very down and still reeling from the split. She said, "I am really struggling today... I don’t want to get out of bed even though I have tons of sh*t to get done before the Holidays. Control the controllable they say. Well, I’ve tried that."

The former Bachelor in Paradise contestant went on to detail exactly why the split — which took place shortly after cheating allegations first emerged in June — has affected her so much. She wrote:

"Most days I feel myself hardening since my relationship ended. I honestly believed I had found my person. He was everything to me. Now the thought of dating leaves me terrified to let anyone in. It’s not like I have anything to give out anyway. I’m trying to wrap any love I still have in me around myself."

Not only has the stress stemming from the breakup affected her emotionally, she also detailed that it's affecting her physically as well:

"I’ve been slowly draining since the lies started and my ex cheated on me. The people that know and love me, see how much this has taken from me, especially physically."

(Bustle reached out to Paulie's team for comment, but did not receive an immediate response.)

"I believe my email was misinterpreted by Danielle. I had no idea I was blocked by Danielle until I received an email from her. I didn’t beg to be unblocked, I asked why I was blocked when we could just talk like adults. If she wanted me to stop talking to her then all she had to do was tell me, I wasn’t hiding talking to her because I thought I was helping her through everything that had happened. I can never forgive myself for what I did or what I put her through by doing so, she never deserved that. Two hearts never break even, I am happy in my new relationship which started getting more serious while filming next season of The Challenge and I understand how hard that may be to see. I’m not trying to get back with Danielle. I wish Danielle all the happiness in the world and I truly hope she is ok. She has a great support system and is [a] strong woman."

EARLIER: Danielle claimed in her Instagram post that Paulie has continued to get in touch with her in order to express how much he wants to fix things between them. Despite that, she said that she's focused on healing and trying to keep a positive mindset.

Thankfully, she has some help in that arena, as she wrote, "Thank God for my therapist." So, it's clear that she's dedicated to making healthy strides toward her own emotional well-being. She ended her message with:

"Some days are ok, some are really good and I had a great night last night, but today, my place is a mess and I can’t get out of bed and honestly, I just hurt. I’m working on it though 💛"

It was originally reported back in June that Paulie allegedly cheated on Danielle with his Challenge costar Cara Maria Sorbello, per E! News. In response to the cheating allegations, Paulie originally released a statement to E! News in June in which he seemingly addressed the scandal. "I am not proud of my actions these past weeks," he said, and continued:

"I know they speak louder than these words. I have destroyed the one person that has believed in and brought out the best in me. I have many things I need to work on and repair internally. I want to be better. I know I haven't earned it, but I ask for patience and privacy while I work on repairing myself."

Prior to this, Paulie and Danielle had been in a relationship, which they chronicled on their social media pages. They went Instagram official in January. But after the allegations emerged, they have since parted ways. Currently, Paulie appears to be seeing his Challenge costar Cara Maria, as evidenced by some recent photos from their vacation together which were posted on Dec. 19.

Danielle may be taking the split pretty hard, but despite the pain that she's feeling at the moment, it still seems as though the always-graceful reality star is keeping her head held high.