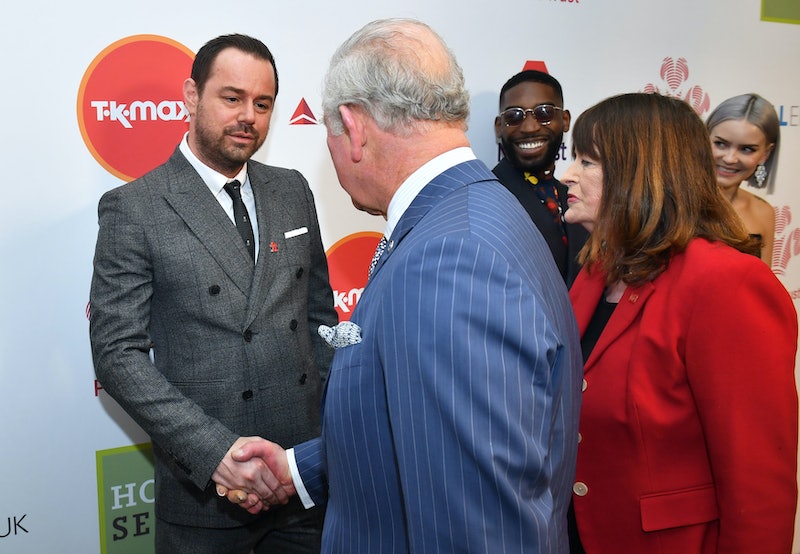 Royalty perhaps isn't the first thing that springs to mind when it comes to Eastenders star Danny Dyer. However, the actor's ancestry shocked the nation when it was revealed that the Albert Square resident was, in fact, of royal descent. The actor made the discovery during filming of the BBC series Who Do You Think You Are? back in 2016, and now Danny Dyer's hilarious interaction with Prince Charles has once again got people talking.

According to the BBC, Dyer met Charles, the Prince of Wales, while attending the 2019 Prince's Trust Awards, and introduced himself as a "relative." He then went on to explain his connection to the royal bloodline. Dyer said:

"I'm in EastEnders. Just wanted to let you know we're related as well. King Edward III is my grandfather — but I won't go into it. No he is, on my life."

The prince replied: "A very long way away."

While appearing on stage, Charles later informed the onlooking audience that he had "discovered a long-lost relation with Daniel Dyer," before continuing: "[Dyer] told me he was descended from Edward III, which is interesting. I must do some research when I get back."

The Mean Machine star then joked with the audience that he was having a "family reunion" with the prince. He said: "When your cousin Charlie makes the call, you've got to help your family out, you know what I mean?" Dyer, who was at the ceremony to present the Mentor Of The Year Award, then later joked this his references to their family connections appeared to go right over the prince's head, describing them as going "straight up his nut."

While filming an episode of Who Do You Think You Are? three years ago, Dyer discovered that he was a distant relative of Thomas Cromwell, Edward III, William the Conqueror, and Henry III. While discussing his surprising family tree, the Eastenders star said: "I’m still in shock at the fact that I’m related to such important people. I’ve had a ball getting to know them. It was a nutty experience," reports the Telegraph.

As previously reported by Bustle, the Football Factory actor then went on to present a two-part series titled Danny Dyer's Right Royal Family. The BBC series showed the actor as he got to know his royal ancestors, and experience how they once lived. During filming, the actor was tasked with eating sheep's tongue like his Viking ancestors. He was then required to hunt just as his 30x great-grandfather William the Conqueror would have, and wear 14th-century armour — which is precisely what his 19x great-grandfather Henry Hotspur Percy is thought to have worn back in the day.

According to Digital Spy, Dyer previously poked fun at some of the negative reactions to his BBC series. He said:

"There’s been a bit of bad press around it, maybe, me 'dumbing down history.' I don’t understand that ... because I’ve got a working class accent, is it? I just think these people, the establishment, can’t bear the idea that I am 110,000th in line to the throne — and they need to start accepting it. The revolution starts now with me."