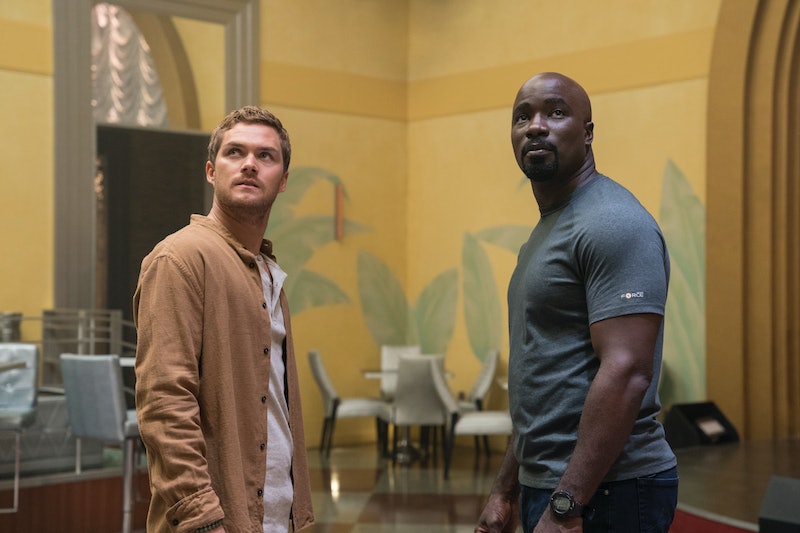 Luke Cage made his first appearance in Netflix's Marvel universe in a steamy romance with Jessica in Season 1 of Jessica Jones. He's since moved on to his own Netflix series, and also appeared in Netflix's Marvel crossover series The Defenders. But while Marvel fans often love a good crossover, when news broke that Iron Fist would appear in Luke Cage Season 2, not everyone was thrilled. Iron Fist premiered amid a whitewashing controversy and a myriad of representation problems for Asian-Americans. But instead of giving up on the iconic-yet-problematic comic book character, Marvel and Netflix decided to give Danny Rand another chance and renewed Iron Fist for a second season. And Luke Cage showrunner Cheo Hodari Coker didn't want to wait around for Iron Fist Season 2 to give fans what he believes is the real version of Danny Rand.

When Iron Fist shows up in Luke Cage Season 2, a true Power Man and Iron Fist team-up is finally spotlighted. The action-packed episode — Episode 210 — features Danny (Finn Jones) and Luke (Mike Colter) working together, fighting together, and sometimes fighting with each other (in a friendly way that's more like banter) and pays homage to the Power Man and Iron Fist comic book run that first debuted in 1972.

"I think we're going to get 100 percent positive reactions for how he appears on our show."

But bringing a controversial character like Iron Fist to Luke Cage surprisingly didn't concern Coker. "That's our arrogance in that I didn't care that people didn't like Iron Fist, because no one had ever seen Iron Fist through the prism of Luke Cage and our show," Coker tells Bustle during a sit-down at a recent Netflix event in Hollywood. "So yes, people had seen The Defenders, yes, people had seen Iron Fist and had mixed reactions, but I think we're going to get 100 percent positive reactions for how he appears on our show."

Presenting a new-and-improved Iron Fist to the world after two separate series had tried to do it before was a challenge that Coker couldn't wait to tackle, because he already had a clear vision for how to execute it. "We wanted to do Danny Rand differently than how he's appeared before," he says. "And we got our wish. Akela Cooper wrote an incredible episode and when you see that team-up, when you see Luke and Danny fighting side-by-side, not with just any Wu-Tang song but an underground, B-side Wu-Tang song that fits the scene perfectly, it's one of the best moments of the season."

To Coker, the way to "do Danny Rand differently" was actually pretty simple: "Just swagger," he says with a big smile.

"Just having fun and being Danny Rand," he continues. "The moments in the barber shop. His way of explaining himself and what Chi represents. It didn't feel like the criticism he's gotten where, 'Danny whitesplains Kung Fu.' We didn't want to do any of that. We wanted to come from an organic place because he had an experience in K'un-Lun that's kind of funny to Luke Cage, like, 'Come on man, I don't believe in this shit.'"

And bringing Danny Rand to Luke Cage has another benefit: Danny is also able to impart some much-needed wisdom to Luke at a crucial moment in the upcoming season.

"There are moments that really do address the anger that Luke has been feeling and holding back all season in a real way as it manifests," Coker teases. "You see how Luke manifesting it in the episode is different from how ultimately Mariah Dillard [Alfre Woodard] and her anger erupts at the end of the episode. You have two different paths, the Luke Cage path in which he's able to channel it in a positive direction, and you've got the Mariah Dillard path, in which she channels it in the most negative reaction possible. When you see her embrace being Mariah Stokes, she can't come back from it."

Overall, Coker is satisfied with his version of Iron Fist, no matter what the critical and fan response to it will be. But he does have one regret.

"The only thing that kills me is that the song that we really wanted, 'Wu-Tang Clan Ain't Nuthin' Ta F-k Wit,' we didn't get it cleared," he says with a groan. "Ugh, that's the only thing that would have taken what I think is a scene that's a 10 to an 11. We only got to 10, but I still think people are going to be happy with what we've done." Will Luke Cage Season 2 satisfy fans who have so far been left cold by Iron Fist? Decide for yourself when the new season begins streaming on Netflix on June 22.