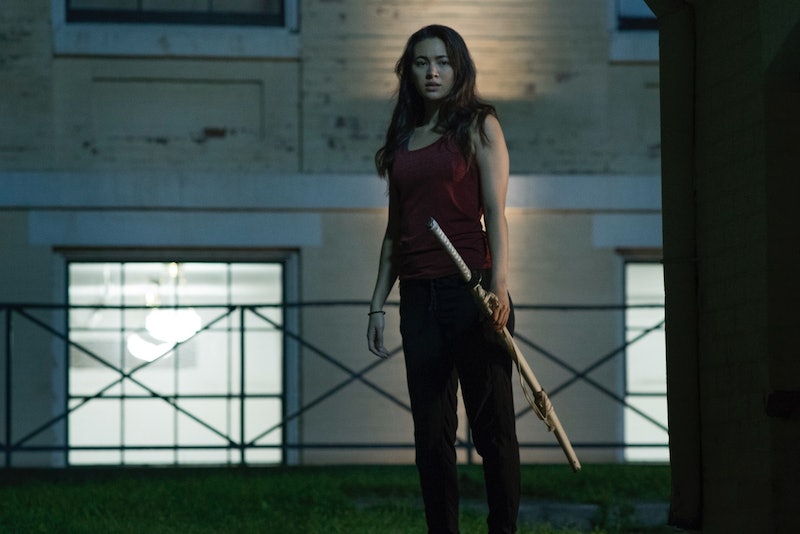 Iron Fist is the most controversial Marvel project to date. Netflix's newest series, based on the comics created in 1974, has been a lightning rod ever since it was announced because Iron Fist has a troubling history of cultural appropriation and whitewashing of Asian culture. Unfortunately, the new adaptation doesn't do much to stop this legacy. In fact, Iron Fist adds to it by making Colleen Wing a stand-in for all Asian-Americans. As the season progresses, this sadly advances the false narrative that all Asians are foreigners.

At its most basic, Iron Fist is about a rich white man, Danny Rand, who is trained by monks in mixed martial arts and becomes their greatest warrior, one destined to defeat an evil Chinese organization known as the Hand. Colleen is the show's most prominent supporting character, a badass Asian fighter who can more than hold her own in a battle. Colleen is arguably the best part of Iron Fist, but she's still an incredibly problematic character used as a sort of catch-all of Asian ethnicities.

Colleen is the first Asian character introduced to Iron Fist, as she meets Danny in the park while putting up flyers for her dojo in the season's first episode. Danny spots her immediately, sees her flyers, and notices her name is Colleen Wing, so, naturally, he starts speaking to her in Mandarin. She answers briefly before informing him that she hasn't spoken the language in years and feels more comfortable speaking either English or Japanese, much to Danny's disappointment. Danny's logic that Colleen must speak Mandarin is a classic example of the stereotype that Asians are all foreigners — one that Iron Fist continuously enforces.

This first interaction also sets up a troubling power dynamic between Danny and Colleen, in which Danny is shown as more knowledgeable about Colleen's own culture. It's an unearned and offensive scenario, made more ridiculous by the fact that Danny's actions are never called out, and it only serves to advance the series' "white savior" narrative.

A major part of the problem is that Iron Fist never makes it clear what Colleen's culture actually is. ... Whatever Danny needs her to be, she becomes.

When Danny steps into her dojo uninvited, for example, and starts lecturing her on how to harness her chi, Colleen is rightfully offended. But in the end, he is the Iron Fist. By nature of the character, the white Danny Rand is a better fighter than she is — and he knows it.

By the end of the season, Colleen is seen trying to harness her own chi as Danny guides and corrects her movements.

A major part of the problem is that Iron Fist never makes it clear what Colleen's culture actually is. She becomes a sort of revolving door of all East Asian ethnicities. She wears a red bomber jacket with tigers on it, so you know she's actually Asian. She speaks some Mandarin, but also Japanese. She practices karate and kung-fu, wields a katana as her weapon of choice, and recognizes the names of Chinese gangs and restaurants. Whatever Danny needs her to be, she becomes.

Colleen's ethnic malleability is aided by the fact that her ethnicity is never explicitly stated. Is she Japanese, Chinese, both? Is she biracial? Was she born in America, or somewhere else? How does she identify herself?

By leaving these questions unanswered, Iron Fist leaves it to the audience to determine her identity and allows her ethnicity to serve the story at any time. She can be Japanese in fighting style, but speak Chinese when Danny needs her to. Thus, Colleen ends up without a real identity, and the only prominent Asian character in the series is left incomplete. (Incidentally, Colleen's ethnic ambiguity is reminiscent of another Netflix Marvel character, Elektra, introduced in Season 2 of Daredevil.)

There's another important aspect to Colleen's vague otherness and knowledge of all things Asian in New York City: It advances the narrative that Asians are foreigners. In the world of Iron Fist, Asian-Americans do not exist. Every single Asian character introduced in Season 1 is not American, except for Colleen — though we don't know much about her early life. From the gang leaders to the other gang leaders, nearly every Asian character speaks with an accent.

What's more, in the world of Iron Fist all Asians in New York City seem to live in Chinatown. Danny never runs into Asian characters in any other place, not even at his relatively diverse office in midtown. In fact, Asian characters in Netflix's Marvel Universe tend to exist in only two places: Chinatown or China. They also tend to have one of two professions: drug dealer or gang leader.

In this sense, Colleen is an outlier, and a welcome one. As someone fighting on the side of good and trying to give back to the youth of her neighborhood, she is one of the few positive Asian representations in Marvel's Netflix universe. But that only goes so far when she is one character of many on Iron Fist, which itself is one of four franchises (and counting) in that universe.

Colleen Wing is a small first step towards diversifying Marvel series, especially with Asian characters, but her role also exemplifies many of Iron Fist's problems. Hopefully, Colleen's role in The Defenders will be a much larger, step toward making those Asian characters more than just stereotypes.