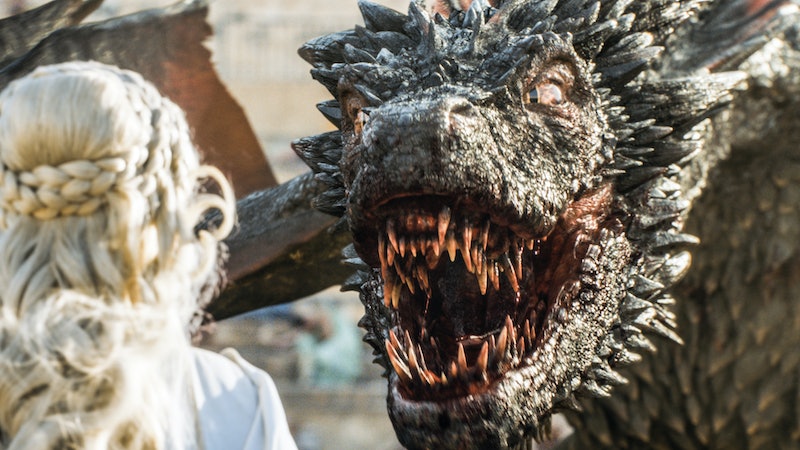 As Game Of Thrones has progressed, everything about it has gotten bigger: the budget, the battles, the cast list, the death count… and, of course, Drogon, Rhaegal, and Viserion. The trio of fire-breathing lizards have grown steadily larger — and now, in Game Of Thrones Season 7, Dany's dragons will be bigger than ever. Matt Shakman, a first-time director in the new season (who has also helmed episodes of Mad Men, Fargo, and The Good Wife among other shows), recently revealed to Entertainment Weekly that, "The dragons this year are the size of 747s. Drogon is the biggest of the bunch — his flame is 30-feet in diameter!"

That's certainly a far cry from the kitten-sized hatchlings we first met in the Season 1 finale. For reference, a Boeing 747 airliner has a wingspan of 211 feet, is 231 feet long, weighs 875,000 pounds, and can travel at 628 miles per hour. If the dragons are really anywhere near that big, it's hard to imagine how anything could stand against them — man, beast, or wight. But with 13 episodes left to go over the course of two seasons, there has to be some obstacle between Daenerys and the Iron Throne. Surely she's not just going to waltz into King's Landing in the Season 7 premiere and conquer Westeros with her scaly minions in one fell swoop. But what could possibly compete with three jet-sized dragons?

Here are six things that could prove bothersome for Drogon, Rhaegal, and Viserion in Season 7:

Season 6 positioned Euron Greyjoy, newly crowned king of the Iron Islands, and his massive Iron Fleet as one of the last things that stands between Dany and reclaiming her kingdom. Sure, we saw the dragons lay waste to the combined fleet of Astapor and Yunkai last year, but maybe the Iron Fleet will be able to overwhelm them through sheer force of numbers — especially if they come prepared with trebuchets and other weapons to defend against attacks from the air.

In the books, his massive fleet isn't Euron's only weapon. Although it has yet to be seen on the show, the Crow's Eye is also in possession of an ancient artifact called Dragonbinder: a horn supposedly carved from the horn of a massive dragon, banded with Valyrian steel, and inscribed with magic glyphs that, when blown, binds any dragons nearby to the will of the horn's owner. (It also kills whoever blows it, but, you know, details.) This would be a handy tool to have when going into battle against three dragons… if the show ever gets around to introducing it.

It doesn't seem like fire is something a dragon would have to worry too much about; but wildfire isn't just regular fire, and, although its hypothetical effects on dragons are up for debate, it's conceivable that it could be used as a weapon against them. Cersei better hope she didn't use up literally all of the wildfire in King's Landing when she blew up the Sept of Baelor, because it may be the only thing she can use to fend off Dany's impending invasion.

The show hasn't delved too much into the history of the maesters — the seemingly benevolent counselors and healers who serve the great families of Westeros. But one of the most popular and well-researched theories among fans of George R.R. Martin's novels hints that the maesters aren't as kind and innocuous as they may seem. Referred to as The Grand Maester's Conspiracy, the theory claims that maesters are extremely anti-sorcery and are responsible for wiping out all magic (including helping to kill the last of the dragons) in Westeros. If this is true, then surely they'll set their sights on Dany's dragons when they land on the continent. And with Sam newly arrived at the Citadel, it's clear that the maesters and their motives will be more important than ever in Season 7.

Like the effects of wildfire, there's also much debate among fans about whether or not greyscale can kill a dragon. A mysterious and deadly disease first seen on the Princess Shireen and recently contracted by Jorah Mormont, greyscale slowly turns its victims into stone and drives them mad in the process. With Jorah once more serving on Dany's counsel, it's possible that he could come in contact with her dragons… and pass his illness onto one or more of them. Wouldn't it be ironic if it's not a magical horn or a superpowered fire that kills the dragons, but rather a simple disease?

Although they've never been seen on the show or in the books, ice dragons (like the one seen in this fan-made poster) are the stuff of legend in the world of Westeros. And it stands to reason that the only thing that can go toe-to-toe with a fire-breathing dragon is an ice-breathing dragon, right? This has to be the answer mostly because how cool would it be to see Dany and Drogon going to battle in mid-air against the Night King and his frozen-zombie-dragon? It would be the most cool.

You can see the bigger and badder dragons in action when Game Of Thrones Season 7 premieres on HBO on Sunday, July 16.