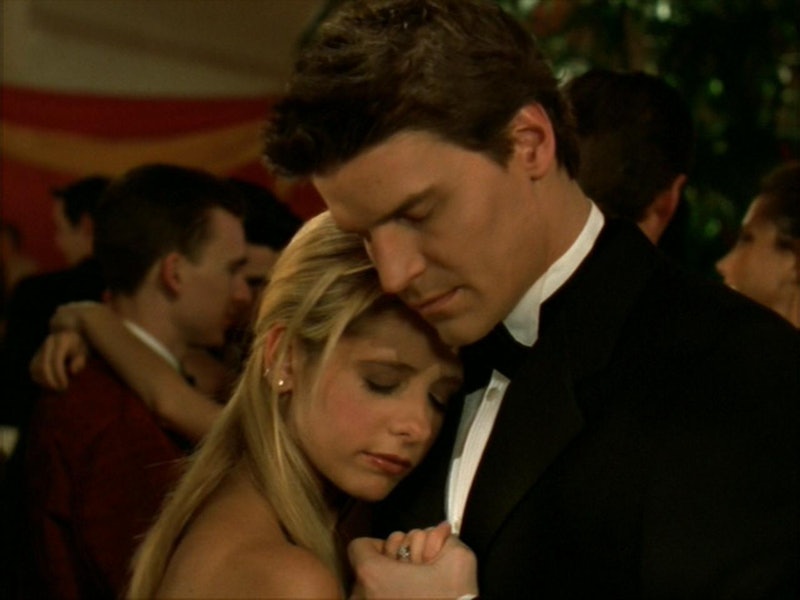 He may be wrapping up his millionth (read: 12th and finale) season of Bones, bu,t to me, David Boreanaz will alway be the OG '90s vampire heartthrob. (Angel OK? I was more of Spike fan in a very real, very creepy had-a-cardboard-cut-out-in-my-teen-bedroom kind of way, but, even still, I meant Angel.) The early aughts of Buffy the Vampire Slayer was anchored by Buffy and Angel's tumultuous, apocalypse-stirring romance and all that tortured brooding. But when Boreanaz caught up with Entertainment Weekly in honor of Buffy's 20th anniversary, he looked back to the role as simply a fateful match-up.

"When Buffy hit, I was in the right spot at the right time, but I had been struggling for years just to get in the door," he says. "I couldn’t even do a commercial, like a gum commercial without freaking out." All he knew was that the character was supposed to have a six episode arc in the 12 episode order, and he was cast because the Buffy team was pressed for time. Obviously, he couldn't have predicted that the show, and the role, would have expanded through universes and earned an honored place in the pop culture pantheon. He was just happy that he had nabbed something after all his struggles.

"You have to go through the pain to get to the other end, and then once you get to the top, you’re not down — you gotta climb other mountains," he continues. "It’s not like “Hey, let’s pack it in."

Then day one of shooting, Boreanaz got a succinct description on his character, and it helped him embrace it:

Clearly, the actor really brought this fighting spirit to the character over the years. As early as "Gingerbread," Angel is giving speeches to Buffy about how they never truly win in but "that's not why we fight." They do it because there's things worth fighting for. And when Boreanaz bounced back from the Buffy to helm the spin-off Angel, he really battled hard for the helpless, down to the last punch thrown in the series finale when the odds are stacked against him.

This tidbit gives us tremendous insight on what the actor channeled into the vampire-with-a-soul (and also some context on how Angel was able to bounce back from the dead like it was NBD).

Anyway, I'm glad that Buffy gave Boreanaz the big break he needed, and that he gave Angel the intensity and fortitude to make him timeless.