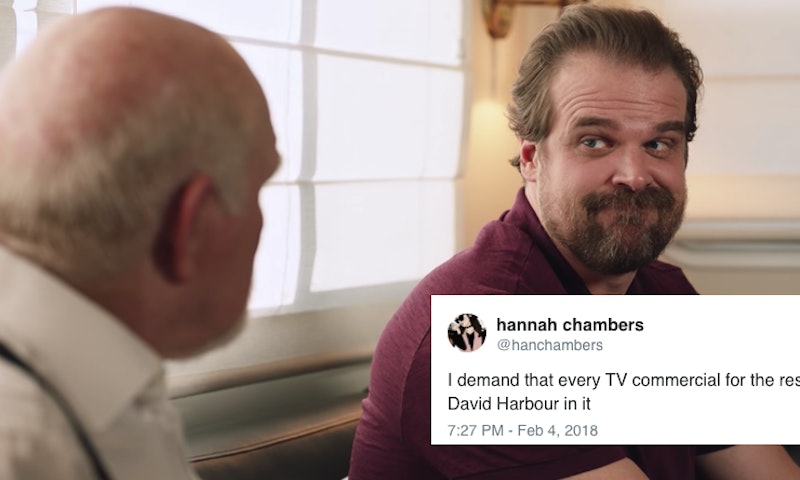 Stranger Things fans, gather round, because it's time to talk about David Harbour's 2018 Super Bowl commercial. Harbour helped promote Tide and its stain removal capabilities during the big game with an extremely meta ad that spoofed seemingly every Super Bowl commercial trope.

The spot is a fun way to showcase Harbour's acting chops, and it's thrilling to watch him go from being the suave guy in a car commercial to the nerdy guy in commercials who sells you insurance. Of course, any Stranger Things fan already knew that Chief Hopper can do it all — but at least the rest of the world can finally witness it, too.

Naturally, fans of Harbour's — especially those who couldn't care less about the big game itself — were happy to see him acting again.

Many considered it the highlight of their night...

Others couldn't resist pointing out that the ad was disappointingly devoid of any references to those tasty Tide Pods.

A few days before to Super Bowl LII, teaser ads were released by Tide touting Harbour's big commercial. In one, Harbour revealed to Tide spokesman Terry Bradshaw that he was shooting a Tide ad for the Super Bowl, because "last year the guy who did it dropped the ball." Of course, Harbour was referring to Bradshaw's 2017 Super Bowl commercial. The second one featured the former NFL player asking Harbour, "What's your bit? Jelly, queso?" Eventually, the Netflix star responded, "Yeah, you know I can't tell you that, Terry."

Based on the teasers alone, fans could tell that his ad was going to be a hit — and better than last year's Tide ad. There's no going wrong with Harbour. He makes everything better.

Prior to the Critics' Choice Award winner's Super Bowl commercial being released, Bustle spoke with him about what it was like filming the ad. He admits, "I’m not a huge sports guy, in general, like I’m much more a sit on the couch guy and eat doughnuts and read The New Yorker guy," but he says when it comes to the Super Bowl, "I’m really in it for the ads."

And this is his first commercial that he's actually featured in. "It’s never been something that I’ve been that interested in," Harbour says about starring in one. "When they brought this to me, it just really felt as good as an indie film. I was like, 'Why would I not? This is hilarious and amazing and I want to do this.' The fact that it’s on such a big, grand scale platform like this, it’s just really fun."

What really made it all the more special for Harbour was working with Bradshaw. "That guy's like a force of nature and just enormous in every way," he says. "I'm a huge person in real life. I'm like uncomfortably large. I'm like 6' 3 1/2", 6'4", I, you know, weigh a tremendous amount. So, in general, I'm the largest creature in any given room. In that room, Terry Bradshaw both in personality and in actual frame was larger than me and I had a moment of intimidation."

That said, Harbour is sure to note how "hilarious" and "very sweet" the former Pittsburgh Steelers quarterback is. "What a genuinely nice guy," Harbour says, praising Bradshaw. "He’s such a different guy for me. I’m sort of a New York, artistic type and he’s this midwest football player and yet we had so much in common."

The Super Bowl is such a special day for many and Harbour is making it all that more amazing with his commercial. Stranger Things fans are used to seeing him as Sheriff Jim Hopper, so it's a nice change to see him in a different light — and to see him being even more charming.

More like this
Oops! The 'Stranger Things' Monopoly Game Has Spoilers For Season 4
By Alyssa Lapid
20 Photos From The 'Stranger Things' Season 4 Premiere To Make You Feel Old
By Alyssa Lapid
David Schwimmer Doesn't Remember This Classic 'Friends' Episode
By Sam Ramsden
Jake Daniels Just Became The UK’s First Active Football Player To Come Out As Gay Since 1990
By Sam Ramsden
Get Even More From Bustle — Sign Up For The Newsletter