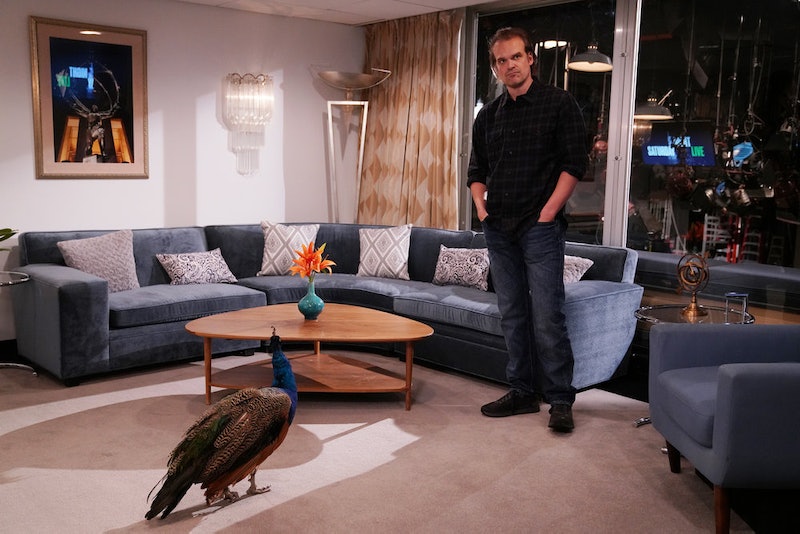 Chief Hopper may have escaped the Upside Down on Stranger Things, but David Harbour's Saturday Night Live monologue couldn't get away from jokes about the Netflix series. "I'm so much more than Stranger Things," Harbour insisted, listing his credits from Shakespeare in the Park to Hellboy. Nevertheless, moments later, a simple walk through the SNL studio turned into another adventure straight out of Hawkins.

The halls of the Saturday Night Live opened to reveal a portal to the Upside Down, and Harbour may have even dropped a spoiler about Hopper's fate on Stranger Things while he was down there. When Pete Davidson (who has apparently been in the Upside Down all season, per the sketch) asked point blank whether or not Hopper was alive at the end of Stranger Things 3, Harbour said "yeah, no" and fumbled over his words until grinning and settling on a vague "just watch the show, you'll find out next season."

That doesn't really make things any clearer, but the fact may be that not even Harbour knows if his character is alive or not — or the Duffer brothers, for that matter. Earlier in the week, Harbour Facetimed the Stranger Things creators during his appearance on Late Night with Seth Myers to ask about Hopper's fate — and they said they were "still figuring it out." Suffice it to say, fans looking for answers about Hopper probably shouldn't read too much into Harbour's SNL bit.

The "walk and talk" studio tour monologue is a Saturday Night Live standard, even if it's not as popular as the song and dance monologue, the stand-up routine, or the fake audience Q&A-style monologue. Incidentally, Lin-Manuel Miranda — who made a cameo on Saturday night's episode as Julian Castro — took the studio tour monologue approach when he hosted in 2016. Technically, Harbour got the tour he asked for... it was just to an otherworldly realm he was already pretty familiar with.

The rest of the monologue was peppered with other Stranger Things references. First, Harbour found Aidy Bryant trapped in SNL's version of the Upside Down, wrapped up in creepy vines like the dearly departed Barb from Season 1. Harbour promised not to forget about her, but then repeatedly called her "Barb"... which basically meant Bryant was doomed. Then, Beck Bennett was attacked by a Demogorgon in the middle of a long and boring story about his comedy career. Meanwhile, in the alternate universe, Lorne Michaels is an NBC page and Kenan Thompson runs SNL. At least some things aren't so bad in the comedy Upside Down.

Harbour didn't seem that upset about his monologue being inundated with Stranger Things jokes. Even though Harbour expressed an interest in showing off his skills beyond playing Hopper, he still went along with it and did his best to "rescue" the SNL cast from the horrors of Stranger Things. Perhaps that's a hint he's not quite done with Stranger Things yet — or he just loves the dancing detective as much as fans.