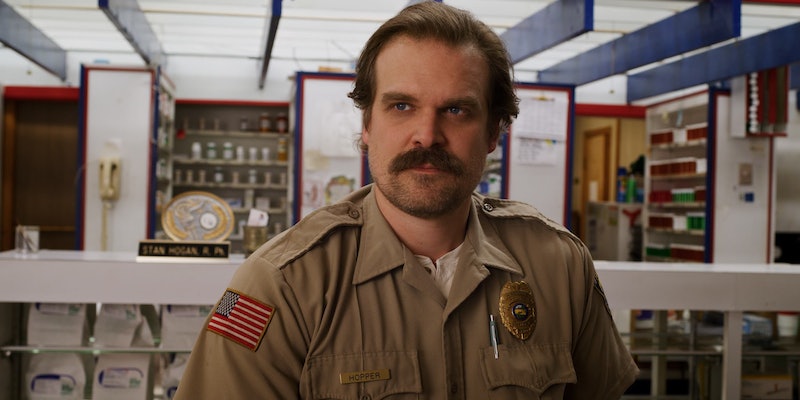 "We're not in Hawkins anymore." That's what the tagline at the end of the Stranger Things 4 teaser says, and the cryptic phrase might also reveal what happened to Hopper in Stranger Things 3. The beloved sheriff played by David Harbour essentially disappeared at the end of the season, but while many fans worried he died, this teaser suggests that Hopper could be very much alive.

In the Season 3 finale, fans watched as Joyce closed the gate to The Upside Down, which resulted in Hopper's apparent death. After the gate was closed, a huge blast occurred, seemingly vaporizing anyone in the vicinity. Since Stranger Things 3 was released in July of 2019, there have been many theories about Hopper's fate, including that he could be the mysterious "American" in a Russian prison that's also housing a demogorgon.

As it usually goes with TV, Hopper's body was never shown, so until that happens, the sheriff's status cannot be determined. And now, the new Stranger Things Season 4 teaser has led fans to believe that Harbour's character is, in fact alive. He's just in the Upside Down.

There are just a few new theories starting to surface thanks to Netflix's latest teaser that dropped on Monday, Sept. 30, and officially confirmed the drama is returning for another season. And these Hopper theories based on the Stranger Things 4 teaser are just the tip of the iceberg.

Hopper Is Trapped In The Upside Down

Seeing as the teaser states, "We're not in Hawkins anymore," and The Upside Down is shown, many are speculating that Hopper might be trapped in The Upside Down version of Hawkins. If you watch the video closely, there's even a "Welcome to Hawkins" sign in the dark and creepy Upside Down. As Twitter user @grantbroussard suggested, Hopper may have jumped into The Upside Down portal prior to Joyce closing it for good and he could be trapped there, waiting to be rescued.

Hopper Is Hiding In His Cabin

Did you see the cabin with the light on in the teaser? Who had a cabin in Stranger Things prior to the Mind Flayer destroying it in Season 3? Oh yeah, that would be Hopper, meaning this could be his cabin in the Upside Down. It would make the perfect hiding spot for Hopper. After all, Will did the same thing in Season 1, but chose "Castle Byers" as his safe space.

Hopper Will Go Back To The Future

The clock shown in the teaser has some fans thinking that Hopper might be rescued via time travel. The clock is certainly significant, as it is also the official Stranger Things Twitter account's profile picture. As fan @TommygarrettPFN noted, a clock is also an important visual symbol in the 1985 classic Back to the Future — a movie that was featured in Stranger Things 3. If that isn't enough, a clock chimes in the teaser when "We're not in Hawkins anymore" appears on the screen,, suggesting the two are very much connected.

David Harbour Is In The Upside Down

Harbour, who plays Hopper on the show, is an evil genius and may have just revealed his character's fate on both Twitter and Instagram. First, his cover photo on Twitter shows Hopper hugging a girl who appears to be Eleven — upside down. As for Instagram, his profile picture seems to be a different piece of fan art of Hopper hugging Eleven — again, turned upside down. Harbour has used social media before to seemingly drop clues about Hopper post-Season 3, so he may very well be hinting at something big here.

You never know what Stranger Things co-creators Matt and Ross Duffer are going to come up with next, but it sure looks like Hopper's return is inevitable. And until then, it definitely looks like he'll just be chilling in the Upside Down, waiting for Eleven and her friends to come rescue him.