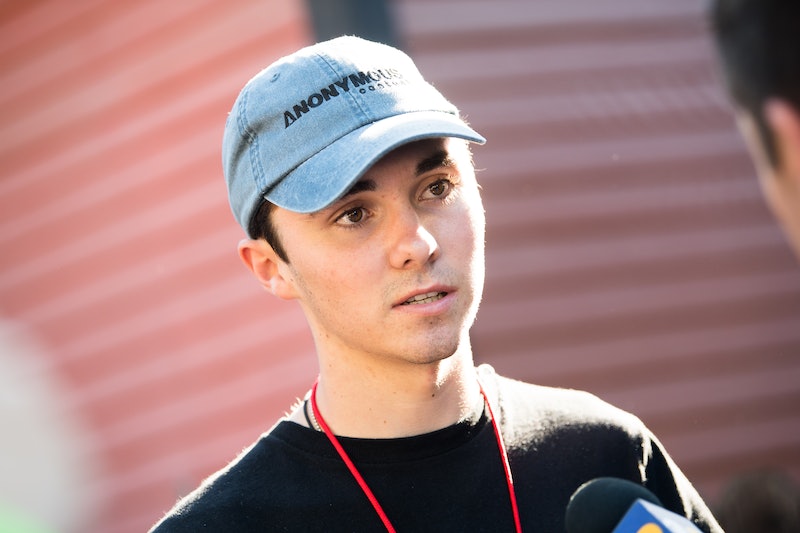 Recently, President Donald Trump has repeatedly suggested that he might declare a national emergency in order to build a border wall between the United States and Mexico. On Tuesday, Parkland survivor and gun control activist David Hogg suggested he wants Trump's national emergency dialogue to prioritize tackling gun violence instead, noting the alarming numbers of gun deaths in the United States.

Hogg made these remarks during an interview on CNN's New Day. Amidst a discussion about the effectiveness of background checks in curbing gun violence, Hogg implied that Trump needs to shift his focus away from the border wall and toward the problem of gun-related fatalities in America. As Hogg told host Alisyn Camerota:

If we really want to start talking about the national emergency like the president likes to talk about, 40,000 Americans dying annually from gun violence is a pretty damn good one to start off with.

The gun control activist also called out legislators for being reluctant to vote for gun control legislation due to pressure from the National Rifle Association. "No legislator should look at these laws and think to themselves, 'Oh I can’t vote on that because I’ve taken campaign contributions from the NRA [National Rifle Association],'" Hogg noted. "And that’s what they’re thinking."

He also implored the American public to be more aware of the influence of the gun lobby in Congress. "The American people need to wake up and realize — again and again, [this is] the reason these laws are not getting passed …," Hogg asserted.

The Parkland student's appearance on CNN came as Democrats introduced a new gun control bill in Congress on Tuesday. As the New York Times reported, the bill would significantly increase background check requirements, mandating them for almost all firearms purchases. The paper noted that, presently, background checks are required when individuals purchase guns through federally-licensed gun dealers. However, background checks are typically not required for private gun sales, including those conducted via the internet and at gun shows. Generally-speaking, outside of a few very limited circumstances, this bill would no longer allow these exceptions for private sales.

The bill was introduced to coincide with the eight-year anniversary of a mass shooting in Arizona that seriously wounded former Representative Gabrielle Giffords and killed six individuals, CNN reported. The New York Times noted that it is very likely that the bill will pass the House, which now has a Democratic majority. However, its fate is much more uncertain in the Senate, which has a Republican majority.

It's certainly clear that Hogg believes that gun control legislation, like the aforementioned bill, needs to be more of a priority in the United States. As the Parkland survivor pointed out, as the president is focusing on seeking to characterize border security as a "national emergency," a gun violence crisis that kills or injures dozens of Americans every day is continually unfolding within the country.