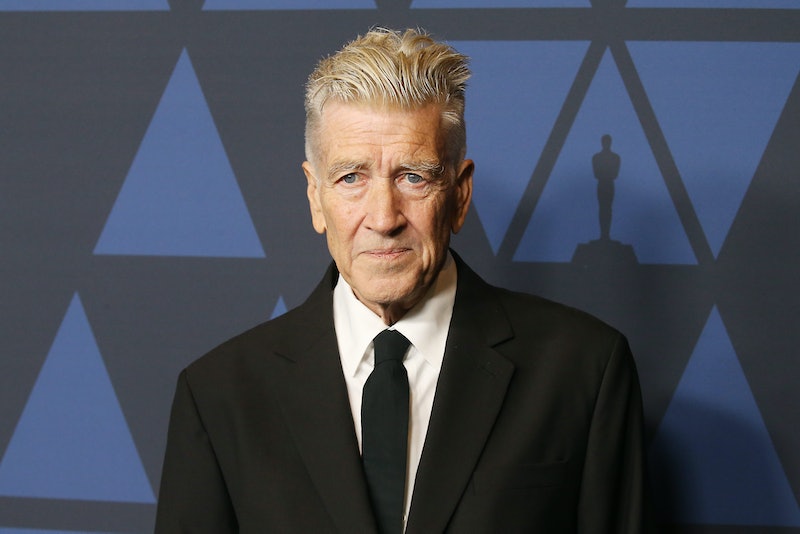 David Lynch is well-known for his, let's say, odder contributions to film and television. Movies like Eraserhead, Blue Velvet, and Mulholland Drive, and of course his revolutionary TV series Twin Peaks, all pushed the envelope in terms of what could be considered popular entertainment. The filmmaker's latest project will only further his reputation for unorthodoxy, as Netflix released a surprise David Lynch short film on Jan. 20 — and it's one of the weirdest things he's ever made.

The 17-minute-long film, which was released on Lynch's 74th birthday, is called What Did Jack Do?, and Lynch both directs and stars in the film as a grizzled old detective. OK, nothing too out of the ordinary yet... but just wait. Lynch's co-star in the short is a monkey named Jack. Jack wears a little suit. He also talks via an old school special effects technique that's similar to Syncro-Vox . The short takes place in a train station cafe, and is filmed in grainy black and white footage that looks like it could be from the 1930s. The plot consists entirely of Lynch's detective interrogating the monkey, Jack, as he suspects that Jack murdered a chicken. Much of the dialogue is disjointed, and often seems improvised. There also may or may not be a big musical number toward the end. On a Lynchian weirdness scale, the short definitely ends up in "backwards-talking little person from Twin Peaks" territory. In other words, it is one of the most bizarre things Lynch has ever done.

Fans of the director definitely seem to agree with that assessment, judging from the reactions the short has gathered on social media. David Malitz from the Washington Post tweeted, "Well the new David Lynch Netflix thing is pretty David Lynch-y," along with a screenshot from the film with Jack saying, "I am not shitting you," which is an actual line the monkey says in the film. The Twitter account for VODzilla gave a cheeky multiple choice quiz asking how people typically celebrate their birthdays before revealing how Lynch celebrated his 74th birthday: "How do you celebrate your birthday? A. Dinner with family. B. Drinks with friends. C. Release a 17-minute film about you interrogating a monkey on Netflix. David Lynch turns 74 today. He chose C."

The short, which was not announced prior to its release, is the second surrealist short to be released by Lynch in as many years. His most recent project prior to What Did Jack Do? was a 2018 short called Ant Head. Also shot in black and white, the 13-minute short depicts a block of cheese getting overtaken by a bunch of ants set to music. As for more mainstream content, if you can call it that, Lynch last worked with a big budget and famous actors on his Twin Peaks continuation, Twin Peaks: The Return, which aired on Showtime in 2017 and drew loads of critical acclaim.

It's anyone's guess as to what's next for Lynch. The director has no upcoming projects listed on his IMDb page, but that may not mean much since What Did Jack Do? is also missing from his page as of this writing. The only thing fans know for sure is that whatever Lynch does next, it will be unexpected and strange.

More like this
Here’s Everything Coming To & Leaving Netflix In February
By Jake Viswanath
Twitter Is Mad At The Razzie Awards For Nominating A Child For Worst Actress
By Radhika Menon
At 28, Rosie Perez Risked Her Career To Stop Playing Stereotypes
By Gabrielle Bondi
Here's How Netflix Should Adapt Prince Harry's Memoir Into A Movie
By Ginny Hogan
Get Even More From Bustle — Sign Up For The Newsletter
From hair trends to relationship advice, our daily newsletter has everything you need to sound like a person who’s on TikTok, even if you aren’t.