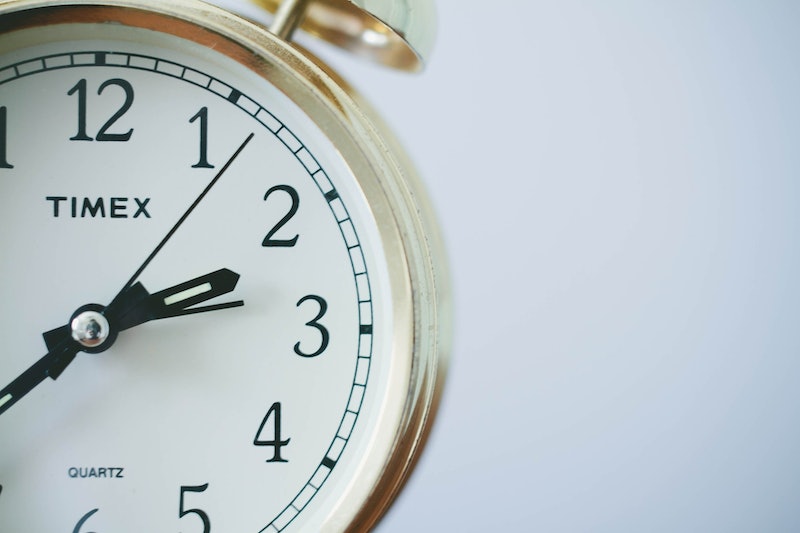 I'm not going to lie: I've been looking forward to Daylight Saving Time for months, mostly because I struggle to wake up when it's still dark outside. But, I recently learned that sleep patterns aren't the only thing affected when we spring forward — Daylight Saving Time can affect your horoscope too. If you've ever had an astrological reading, then you know that the exact time and place of your birth plays an important role in your astrological chart; for those born around DST, though, getting an accurate birth chart can be particularly tricky.

"Today most astrologers use computer programs to do the calculations for a chart, which means they are depending on the computer software to be correct. This also means that the software used needs to be updated on a regular basis to accommodate the way time is recorded on a country-by-country basis," Christine Arens writes on Astrology News Service. "In the United States, in some locations, this means updating software on a local basis as well."

Since DST, in which we "spring forward," happens on a different date each year; indeed, it has even moved several weeks in the past 15 years. As such, people born in March or April need to rely on the aforementioned computing software for an accurate astrological chart. And, because the data is entered by humans, there's still margin for error.

According to Hank Friedman's article Astrological Techniques and Uncertain Birth Times on Soul Healing, "We can, however, fall into the trap of trusting the precision of software too much, without realizing that an inaccurate birth time can destroy the validity of many astrological techniques. And astrology software is not a panacea. It cannot compensate for either data entry errors or birth time uncertainties."

Because your sun, moon, and rising signs make up your birth chart to pinpoint the celestial bodies' exact placement in the sky at the precise moment you were born, having accurate information is important. If you were born in March or April, it's important to ask your astrologer during your reading about DST variables in your birth chart.

There are other factors to take into consideration as well. Not all places in the United States practice DST. Parts of Arizona, Hawaii, American Samoa, Guam, Puerto Rico, and the Virgin Islands do not participate in DST. Additionally, Indiana has counties in both the Central and Eastern time zones, and has not participated in DST consistently. This is why it's always important to tell your astrologer exactly where you were born in additional to exactly when you were born. If you give an incorrect city in Arizona or Indiana, your entire chart will be off, and you could move through life feeling astrologically off kilter. Who needs that? Life is hard enough already.

So, how did we get here? We have Benjamin Franklin to thank for this mess. He first proposed DST in his 1784 essay “An Economical Project” as a way to best harness natural daylight, and save on the cost of candles and oil for lamps. The concept wasn't actually implemented until WWI in the U.S., with Europe picking up the trend in WWII. Now DST is practiced all over the world, though not every country participates.

This has led to some wacky astrological events, particularly for a set twins born on Nov. 16, 2016 near Cape Cod, Mass. According to Astrology News, Samuel Peterson, the older twin, was born at 1:39 a.m. His brother Ronan arrived more than a half hour later. In between the two births, DST ended, the clocks were set back one hour, and Ronan, the younger twin, is actually listed as the older twin on the boys' birth certificates. Oops. I hope the family gets Ronan some astrological counseling now to stave off his sure-to-come existential crisis.

Because DST wasn't a national mandate until the mid 1970s, and record keeping isn't an exact science, many astrologers will calculate your chart for both DST and Daylight Time. You should know by reading the charts which one feels more authentic, and, let's be honest, it's always fun to get two of something.