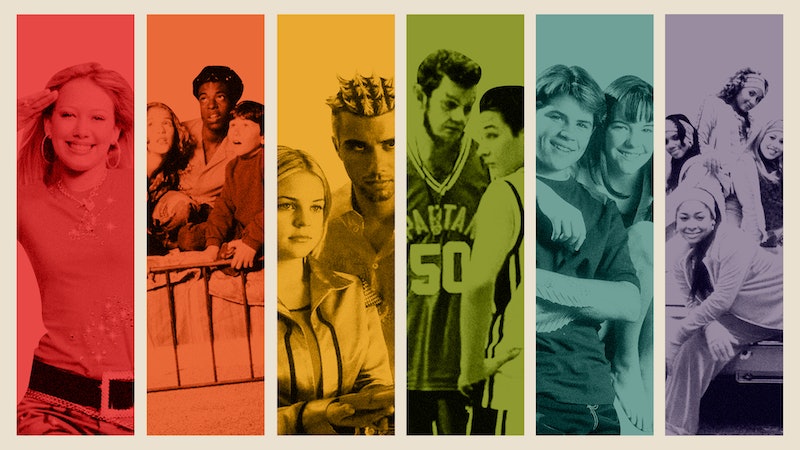 Picture this: You’re in a packed crowd, clapping along as an intergalactic pop star with signature frosted tips dazzles the audience. You and your fellow concert goers are decked out in metallic jackets and brightly colored holographic skirts, screaming indecipherable slang like “zetus lapetus.” Shockingly, this isn’t a scene from a gay bar on a Saturday night – it’s the closing minutes of Disney Channel’s Zenon: Girl of the 21st Century.

Like many other queer people, I hold a special place in my heart for Zenon and dozens of other Disney Channel Original Movies. Sure, part of it is the nostalgia factor: these films transport millennials of a certain age back to the easier days of our childhoods. But I suspect there's another reason DCOMs resonate particularly within the queer community: Because they introduced us to a sense of queerness and campiness that felt warm and welcoming — whether we were out of the closet at the time or not.

While the better known Walt Disney Classics have served as foundational pop culture for generations of children, their traditional story arcs reinforced straight, heteronormative values: The princess or hero embarks on a journey of self-actualization, gets the guy or girl, and eventually defeats an evil villain. Even in adversity, the path to happiness and success is a straight line for the affable classic Disney hero. Meanwhile, those evil villains, many of whom were the true outcasts of the narrative, were often queer coded (see: Scar, Ursula, the list goes on), latently reinforcing the idea that being different wasn’t something to be celebrated. Disney didn’t even feature an openly gay character in a movie until LeFou in the 2017 live-action Beauty and the Beast, with dubious results.

DCOMs might not have explicitly portrayed queer characters and storylines, but they showed that you can thrive even if you’re different from the ill-conceived definition of normal. While Disney classics featured characters that hardly reckoned with their own sense of identity, Disney Channel Original Movies largely told tales of outsiders and misfits, protagonists embracing their true selves amid often very strange circumstances. There’s literally DCOMs about how imaginary friends become Boogeymen (Don't Look Under the Bed), a leprechaun boy who just wants to play basketball (Luck of the Irish), and a teen who ends up using his clone to get better grades (The Other Me). I’d be remiss if I didn’t spotlight The Thirteenth Year, in which a boy finds out that he’s actually a freaking mermaid. As he hits puberty, he starts sprouting sparkly scales a la The Rainbow Fish. Gay!

Then there was Cadet Kelly, which was the closest thing to a same-sex rom-com budding queer kids would see on the Disney Channel during the ‘00s. Starring network powerhouses Hilary Duff and Christy Carlson Romano, two girls go from hating each other to becoming best friends after realizing they’re really good at drill routines together. To say there's sexual tension would be an understatement.

"We didn’t have stories actually about teens coming out as gay or trans, so we watched movies where kids came out as jump ropers, mermaids, rollerbladers, princesses, and leprechauns."

“No one does more thinking about identity than queer people, so when we see movies about teens trying to figure out how they can survive high school but also stay true to themselves, we want that. We’re afraid that if we truly be ourselves and tell people about our passions and put ourselves out there, we’ll be rejected and alienated,” writer Mey Rude, who ranked Disney Channel Original Movies by lesbianism for Autostraddle, tells me. “DCOMs are all about people doing those things and finding out their friends love them more than ever and their lives are better than they could’ve imagined. We didn’t have stories actually about teens coming out as gay or trans, so we watched movies where kids came out as jump ropers, mermaids, rollerbladers, princesses, and leprechauns.” As certified LGBTQ+ rights advocate Debbie Reynolds says in Halloweentown, "being normal is vastly overrated."

The qualities that make you unfit for the world of Disney classics are ones that would make you a star in the DCOM universe.

Model and dancer Tony Collins began to identify with his queerness through High School Musical, which became a phenomenon when he was in third grade. During lunch, he and a close friend would charge other classmates quarters to come sit and watch them perform “What I’ve Been Looking For” and “We’re All in This Together” at the picnic tables. “These movies had so many teachable moments on the importance of loving yourself and who you are, helping you realize how far you’ll go in life by being confident in who you are, and most importantly, loving each other,” he tells me. “There were so many characters from different walks of life, and that sense of unity made these movies so special for me and I’m sure for many others.”

One of the ways we learn gender norms when we’re young is through the types of clothing we’re expected to wear: girls in frilly feminine shapes and warm colors, boys in unflashy T-shirts and functional cargo shorts. But as a kid, all I wanted was to wear the bright colors and shiny fabrics that the characters in the aforementioned Zenon sported in their everyday lives. The aesthetics of Zenon and its successors The Zequel and Z3 — Protozoa’s platinum blonde locks, the pop music that still slaps today — introduced me to a latent part of myself. Now, as a fully realized gay man, I have plenty of glittery ensembles in my wardrobe.

Well-mannered extraterrestrials, mermaid tails, catchy pop music, ridiculous costumes: there really was so much wackiness packed into DCOMs. Disney Channel Original Movies weren’t fairytales, but they showed me the magic of being different, that exploring eccentricity and questioning your identity can lead to the thrill of discovering who you really are. That the qualities that make you unfit for the world of Disney classics are ones that would make you a star in the DCOM universe. That your story doesn’t have to be a fairytale to have a happy ending.

More like this
Netflix Shut Down 'Bridgerton' S3 Rumours About A “Very Dark” Storyline
By Bustle
'The Queen’s Gambit' Season 2 Tweet Wasn’t From Anya Taylor-Joy
By Mary Kate McGrath, Jack Irvin and Grace Wehniainen
Kukulkan From 'Wakanda Forever' Has A Surprising Connection To Marvel History
By Grace Wehniainen
Everything To Know About 'RHONY' Season 14
By Jake Viswanath, Alyssa Lapid and Brad Witter
Get Even More From Bustle — Sign Up For The Newsletter
From hair trends to relationship advice, our daily newsletter has everything you need to sound like a person who’s on TikTok, even if you aren’t.