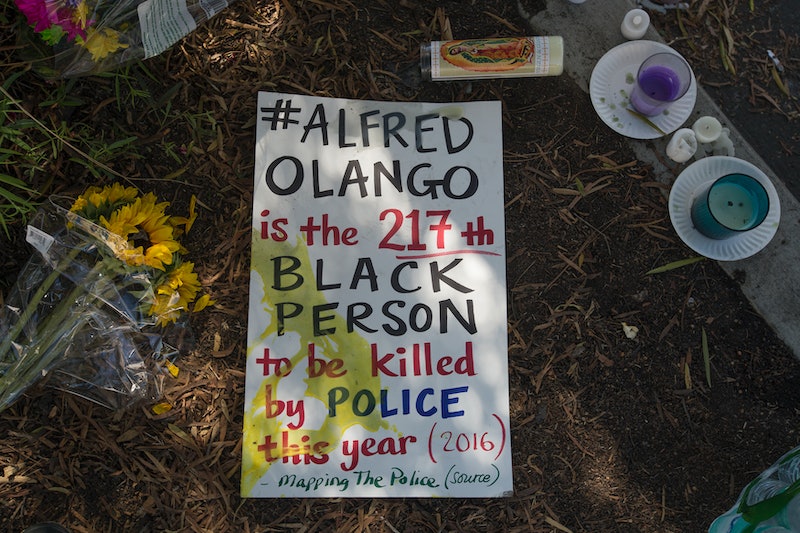 Since the killing of Michael Brown in Ferguson, Missouri, in 2014, the deaths of unarmed black men at the hands of police have been in the national consciousness. Despite years of headlines and protests, the government hasn't been tracking the deadly shootings of unarmed black men by police. But starting in January, the FBI will finally track fatal police encounters, according to The Associated Press.

The database will track instances of death or serious injury as well as "when officers discharge a firearm at or in the direction of someone," according to the wire service. Additionally, the Associated Press reported that the database will trace age, ethnicity and race, gender, and other demographic markers.

However, police departments will not be required to give information to this new database. "The whole point of having a national database is so everyone can speak from a factual basis about what's really happening. There's so much news today about police use of force and yet there has never been a factual, established database against which to compare," Rick Myers, executive director of the Major Cities Chiefs Association, an group of police chiefs and sheriffs from the largest cities country, told the wire service.

Police-involved shootings have also been tracked by Mapping Police Violence, a collaborative dataset on nationwide police killings. The collective found that in 2017 police killed 1,147 people. Of more than 1,000 killed, 25 percent of the people were black. Through its data collection, Mapping Police Violence found that out of 365 days in 2017, police didn't kill someone during 14 of those days. You can read the entire 2017 report here.

Fatal Encounters — a blog run by journalist D. Brian Burghart in Reno, Nevada — aims to create a comprehensive and searchable database of people killed by police. You can search using 15 categories, including race, state, county, and if mental illness was a factor in the police interaction.

The Associated Press estimates that there are roughly 60 million encounters between police and citizens across the country each year. Of those interactions, roughly 1,000 people died. (The exact number fluctuates each year.) Even though adding information to this new database won’t be required for law enforcement agencies, there is a similar federal database on the number of officers who are killed that about 11,000 of 18,000 agencies contribute to.

The New York Times tracked 15 shootings of unarmed black men that became national news to see what happened after their deaths. The Times found that settlements were reached in 11 cases, and an officer was convicted in three of the cases.