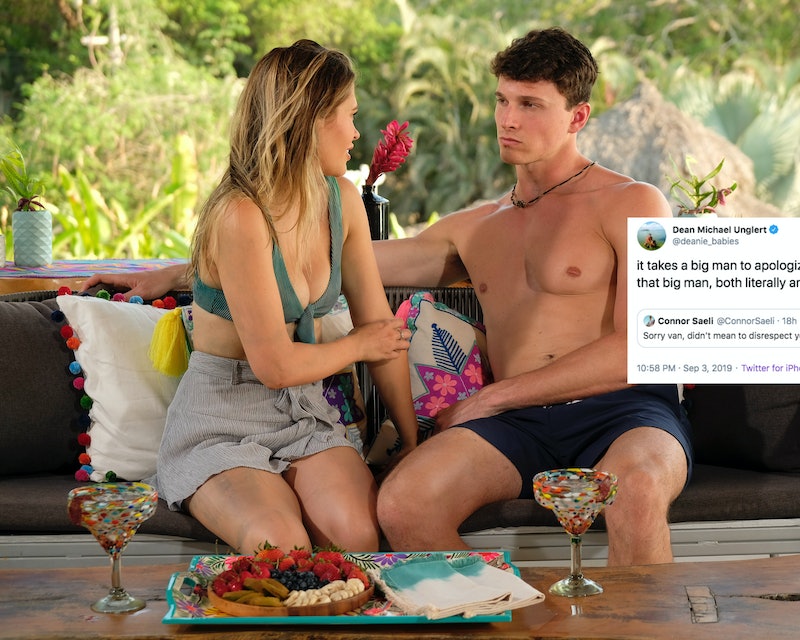 Dean Unglert and Connor Saeli may be currently in the process of fighting over Caelynn Miller-Keyes' heart on-screen, but off-screen these Bachelor in Paradise stars don't have any hard feelings or thoughts of resentment toward each other. This was proven during Dean and Connor's recent Twitter exchange about BiP, which found the latter apologizing for a recent comment he made on the show about Dean's highly talked about van. And based on Dean's response, there's absolutely no bad blood that exists between the two of them, regardless of who Caelynn ends up choosing.

It all started when Dean made his grand return to Paradise during BiP's Sept. 3 episode when he took Caelynn aside and asked her to leave Mexico with him so that they could be together. Dean told Caelynn that, as soon as he left, he regretted breaking things off with her, and admitted that he tends to pull away from people before he can get too emotionally invested. But, he said, he wants to try and make a relationship work with her if she's willing to give him a second chance. And while you could tell that she's tempted by the offer, she's also developed feelings for Connor, who understandably wasn't too thrilled to see his current lady love's ex come back into the picture. In a confessional that aired during the episode, Connor called Dean a “loser” and told the cameras that Dean should just “get back to your f*cking van."

However, after watching the episode air on TV, Connor took to Twitter to apologize for his harsh remark about Dean's home. "Sorry van, didn't mean to disrespect you," he wrote. And it didn't take long for Dean to respond on behalf of himself and said van.

In true Dean style, he choose to make light of the situation, tweeting that "it takes a big man to apologize to a van on twitter. connor is that big man, both literally and figuratively. i stan." Connor has yet to respond to Dean's tweet, but it seems safe to say that the playful banter indicates that, even if these two aren't close friends, they certainly aren't enemies by any means.

Unfortunately, this interaction doesn't really hint at who Caelynn chooses to be with at the end of all this. Sure, Dean and Caelynn are rumored to be dating now Paradise is done filming, but neither have officially confirmed their relationship to the public. Does this mean poor Connor still stands a chance? Probably not. (The allure of the "bad boy" may be too great for Caelynn.) But until we see it all play out firsthand there's nothing more to be done than sit and wait.

“Right now, I’m the most confused I’ve ever been in my entire life. This is not an easy decision,” Caelynn explained to the cameras during the Sept. 3 episode. “I literally have the dangerous guy and the perfect man. I have no idea what to do.” Given the way that she described these guys, you'd think the answer would be pretty obvious, but that's the thing about love. It doesn't always make logical sense.