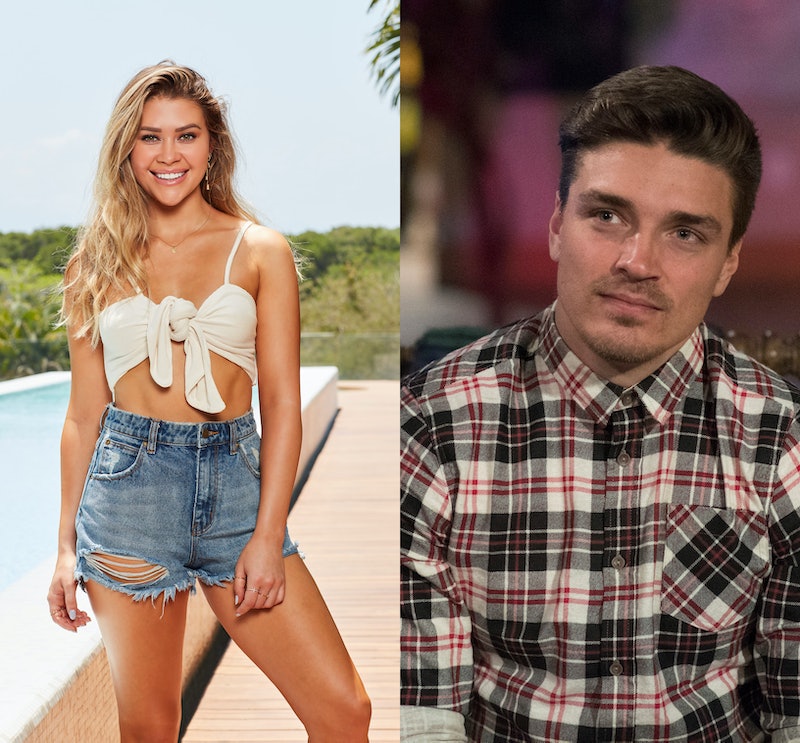 First comes heartbreak, then comes Paradise. Ahead of its August 5th premiere date, Bachelor in Paradise can reportedly already claim at least one lasting romance. Bachelor Nation alums Dean Unglert and Caelynn Miller-Keyes are reportedly dating, per E! News. A source exclusively confirmed the latest reality show coupling to the outlet and apparently Caelynn and Dean's romantic roots reach further back than BiP. (Bustle reached out to Caelynn and Dean's reps for comment on the dating rumors, but have not yet heard back.)

Per the anonymous source, the pair initially "met through mutual Bachelor Nation friends and started DM'ing on Instagram." Ah, all great love stories truly do go down in the DM. While Dean wasn't a part of the initial Bachelor in Paradise Season 6 cast reveal last month, Caelynn was, so one can infer that if the two did strike up a love affair, it happened on a Mexican beach while they were nursing Wells Adams-engineered cocktails.

Caelynn didn't post on the 'gram from June 1 until July 1, when she returned with a photo of herself holding an iced coffee. It was sneakily captioned, "Coffee isn't the only thing that makes me this happy," accompanied by the upside down smile emoji. So, yeah, it seems like Caelynn was trying to send a message to her fans. It was actually her Instagram which also tipped fans off that Dean could be the one positively impacting her mood.

Last week, Caelynn posted a photo of herself smiling in the streets of Barcelona while sporting a white crop top and multi-colored skirt, and neutral sandals. "Clearly hating my time in Spain," she captioned the photo. Interestingly enough, Dean posted a photo from Spain the very same day, causing followers of the Bachelor alums' whereabouts do a collective, "Hmm..."

In fact, the E! News source reportedly familiar with the couple's situation confirmed the couple is traveling the globe together. (Who said helicopter and hot tub dates were the height of Bachelor dream dates?) "Caelynn traveled to Spain to meet Dean and they were together for four days," the source revealed to E!. "They are now in Venice, Italy and plan to travel around Italy together before coming back to LA."

The source also said this couple has been allegedly seeing each other for longer than you may think. "Dean and Caelynn met up in LA and have been dating since last month," the source claimed. If true, this wouldn't be the first time each has dipped into the Bachelor dating pool. Both Caelynn and Dean finished fourth on their respective seasons of The Bachelor with Colton Underwood and The Bachelorette with Rachel Lindsay as lead.

Dean has also entertained relationships with both Kristina and Danielle on Bachelor in Paradise Season 4, which caused drama over Dean's Paradise love triangle. Then, Dean dated Lesley Murphy after his stint on Bachelor Winter Games. So, he's got some experience juggling love in the spotlight and learning from past pitfalls. And Caelynn has made her crush on Dean known for a while, revealing to The Ellen Staff in a March online video series that she had DM'd Dean once upon a time.

Well, if this latest source is to be believed, Caelynn and Dean slid right into a burgeoning relationship.