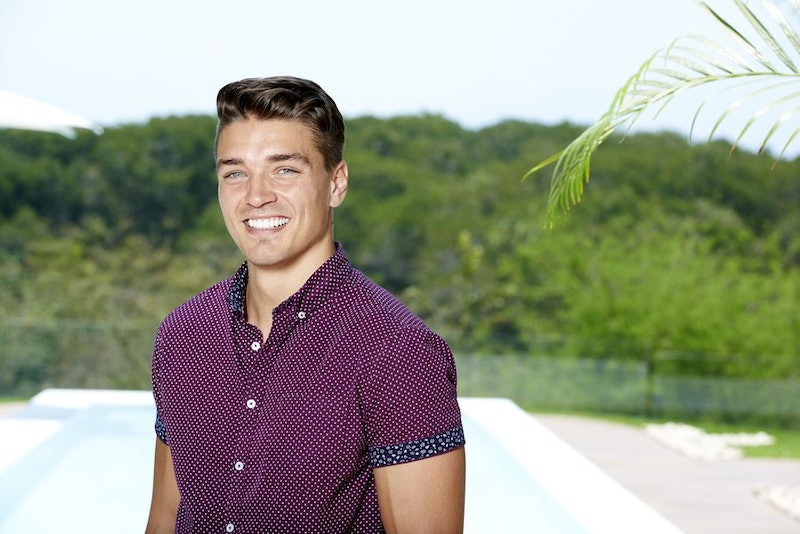 Before Bachelor in Paradise, Dean was the adorable guy from The Bachelorette who fans couldn't get enough of, but, now, he's losing favor fast. After leading both Danielle and Kristina on at the same time since the season began, it's been rough watching their love triangle get worse and worse — especially after he made out with Danielle in front of Kristina on last week's episode. On Monday night, Dean called himself a moron on Bachelor in Paradise for what he's put these ladies through, but he's a little late.

Even though Kristina's had to watch Dean and Danielle flirt since she joined the cast, it definitely hasn't gotten any easier for her (or fans), especially after what she just witnessed. After Dean realized that she'd been able to see the whole thing, including the intimate conversation he and Danielle had in the pool, he felt really guilty — as he should. "All the blame falls on me for being a moron," he rightly noted. He's well aware of how Kristina feels about him and still lets her think she has a chance with him. Plus, as Kristina pointed out, he seemed more upset that she saw him with Danielle than actually being sorry about being with Danielle. Um, Dean, if you think all your problems would have been solved if she wasn't watching that interaction, you haven't been paying attention.

Additionally, Dean's been a "moron" — if that's the word he wants to use — the whole time. This wasn't his big mistake; the big mistake was the fact that he's refused to make a decision between these women and hasn't cut either of them loose — and he hasn't really been honest with either one of them.

It's good that Dean has finally realized that what he's doing is wrong, but that's something he should have done a long time ago — like, back when everyone returned to Paradise after the production shutdown, when he was talking about how he wasn't sure he was ready for the commitment Kristina was asking for. Kristina's clearly developing deep feelings for Dean very quickly, and it's not fair for her to be dragged around — just like it wasn't fair for him to make Danielle a part of this, either.

Maybe now that Dean knows he's handling this situation the wrong way, he'll be more conscious of Kristina and Danielle's feelings and make a change. Or he'll just keep being wishy-washy about the whole thing. If he doesn't want to be a moron, though, he should probably stop doing moron things. It's not too difficult to treat someone you care about with respect, after all.