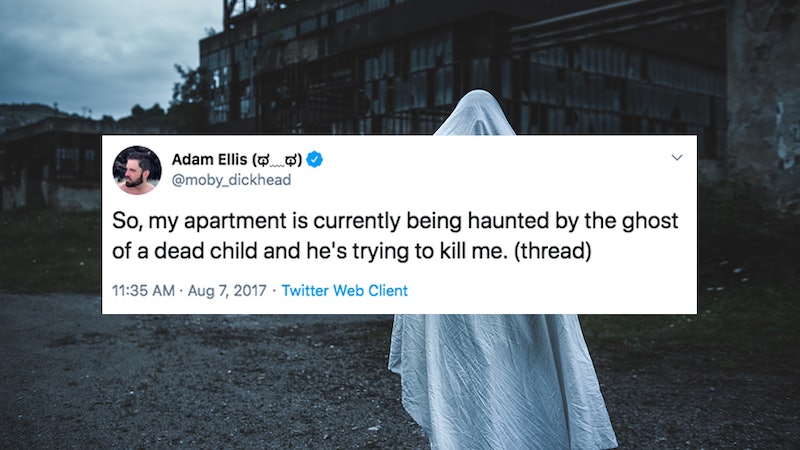 In 2017, illustrator and author Adam Ellis live-tweeted a "ghostly haunting" he claimed to be experiencing in his New York City apartment. He shared updates for months, and during the saga, it was difficult not to become captivated with his story. It was a freaky one, too: Ellis spoke of a ghostly presence called "Dear David," who appeared in the form a boy with bludgeoned-in head, who was apparently haunting him. While the story abruptly ended its run on Ellis' Twitter in mid-2018 (it's currently being developed into a film with a producer from It attached to the project), the story is and images were so chilling that if "Dear David" isn't on your list of Halloween costume options that are genuinely scary this year, it should be.

Whether or not the whole thing was real or just a social media storytelling experiment, it was pretty genius — and the blurry line between fiction and fact make this costume even more spooky.

Plus, if you're going to a Halloween party where people aren't familiar with "Dear David" (unlikely, but possible), you'll be able to use the story of your costume as a very epic ice breaker. Here's how to put together a "Dear David" costume this Halloween:

In all of the images of "Dear David," he's wearing an iconic striped shirt. If you want to get it dirty to make it look more lived in, you can rub it in the grass or soil before you put it on for the night.

The juxtaposition of Ellis' contemporary office clothes against David's dated play clothes from another time is a creepy enough. It'll be immediately clear that you and your BFF are not mean to have been alive in the same century.

David wears a simple pair of casual trousers, but any loose-fitting pair of pants will do.

The old leather shoe is one of the most important parts of this costume because Ellis found this shoe in his apartment during the haunting. Even better than buying a new shoe would be going to a thrift store and buying a pair of seriously worn-in leather shoes to wear.

Lastly, create the dented head look that David appears to have in Adam's photos. This video will help you to create a bald look, but to really look like David, you'll need to add shadow to one side of the head to create a dented look. This will easily the weirdest use you find for your contour palette.

In most of Ellis' pictures, he wore a work shirt and a military jacket. His look is clean and fresh and chic in comparison to David's, which is an important factor to make distinct here.

Like many New Yorkers, Ellis was usually wearing sporty headphones in his pictures. Real fans of the story will remember this!

Ellis' smooth hairstyle is too good to leave out. Use a wig to great his Twilight-worthy locks.

Last but not least, sage, because IRL David is not your best friend:

NewAge Smudges and Herbs
Amazon
More like this
15 Matching Halloween Costumes For You & Your Dog
By Kirsten Nunez
The 8 Best Chew Bones For Puppies, According To A Vet
By Andrea Hannah
Lotus Biscoff Does A Biscuit-Chocolate Hybrid Now
By El Hunt
How To Use The Like To Know It App To Buy Influencers’ Faves
By Emma Carey
Get Even More From Bustle — Sign Up For The Newsletter